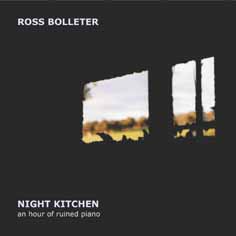 These tracks (with two exceptions) were recorded at night, or at dawn at the latest. The four or five pianos occupy most of my kitchen, and are set up so that I can play them simultaneously.

Several improvisations were inspired by Goya’s Black Paintings; others by the desert country of Central Australia, especially the area round Ngayurru (Lake Mackay) – imagined at midnight. Others still, were inspired by Vivienne Robertson’s photographs.

"Given the nature of the instruments, Bolleter's greatest achievement is not that he extracts pleasing sounds from them but that he combines them to produce music that is both coherent and engaging, the instruments complementing each other's oddities to give the music its distinct character and charm. He relishes eccentricity and turns it to his advantage, playing with and exploring it. End result: this is an album to treasure."

"A gem of a CD. 14 short improvisations on five ruined pianos. The music goes tock, clac and dongngngngn. None of these pianos produces a stable tone. And Bolleter knows all of their indiosyncrasies by heart. And he puts them to great use, combining sounds and textures into noisy yet very delicate and tender constructs. Limping lullabies for a haunted house."

"Ross Bolleter delivers on a promise he never made but has always suggested, throughout his long and distinguished musical career. On Night Kitchen he succeeds in producing what should go down in the history of music as an amazing document that furthers the cause of improvised music. The music of Bolleter's ruined pianos possess an element of surprise; even if their sound is a fixed feature - as characterized by the finality of the sound they produce - by striking notes in consonance with the vast array of permutations and combinations at his disposal, Bolleter has composed a series of pieces that are studies in the sound of surprise.

Naming the studies somewhat dampens their pioneering spirit. Nevertheless, on songs like Gong Heaven and Asmodea, the wisdom of Bolleter's nomenclature is borne out. The sonic journeys of both studies, and their given names, are apt and inspired. The endless joy of the musical journey continues unabated throughout the album, no matter that the names of songs may be intrusive. The fascinating sound and the effect of each note are hypnotic and memorable, with Torque, Nocturnal and Her Long Night's Festival all cases in point. However, the spontaneity of this recording will forever be remembered, as will the spirited nature of its sound. These pieces are superb and entertaining, full of the splendid verve and excitement that the most memorable modern music has to offer."

"The Red Way opens the album with complex, criss-crossing counterpoint like atomised (more accurately, atomising) church bells. Ravine is the most 'pianistic', like a conventional piano has become trapped inside a ruined piano. Best of all, though, is Night Sky at Tjunta: Harmony collapses into noise, while the detailed recording captures the implosion and splintering of a single conventionally fingered triad.

Cage's prepared piano, for all its boldness, substituted one set of secure timbres with another. Bolleter's mission is to harvest the advancing infirmity and instability of already decaying instruments. On a ruined, strike an F sharp and you might hear a flattened fundamental, with a spread of non-tempered harmonics and a percussive rattle. Hit that same note tomorrow, and who knows?"

"While many of today's artists fiddle with the latest digital gadgets, Bolleter has the beat on this methodology, or for that matter, does anyone else? Probably not, yet the artist's pursuit of finding one man's trash and using it as a foundation for art, is a virtuous undertaking to say the least. However, Bolleter's manoeuvres offer the willing listener a rather organic, mind-blowing experience. He renders nimble storylines by tapping the keys and plucking strings amid other mechanics, offset by a resonating sonic experience throughout these tracks.

Bolleter periodically injects a slanted melody line to coincide with an abundance of subliminally designed progressions. At times, his mode of execution can make you feel sorry for these old and neglected implements. It's sort of like the old adage about hitting a man when he's down. Nonetheless, the pianist generates a bizarrely entertaining framework on these fourteen works. Moreover, Bolleter infuses disparate nooks and crannies and sucks out the remaining life that these abused beasts have to offer. His musicality spans dreary and nightmarish motifs, abetted by liquefying slurs and odd noises minus any overdubs or electronics. Bolleter executes a dark and foreboding panorama that is weirdly entertaining. It's not a gimmicky event, since he creates an artistic methodology and becomes 'one' with five neglected artifacts that are years beyond any hint of practical usefulness."

"The pathos of intemperate resonance that transpires from a ruined piano is nearly visible in the work of Ross Bolleter, who makes of this kind of tool a way of living. He has amassed a number of wrecked pianos over the years, five of them occupying his home's kitchen for the occasion; this fact and the choice of improvising during the night or at dawn give this album its title.

Without recurring to the umpteenth quote of Bolleter's theory, we'll only invite the reader to consider this music similar to existential deterioration - not necessarily the progressive tarnishing of metal parts, or strings. The crumbling of a musical machine appears as the pictogram of a microcosm amidst superior forces, like a person gifted with an extraordinary potential that remains unexpressed and ultimately falls to pieces due to a combination of adverse circumstances. Listening to these weird radiations of huddled harmonics and detuned reverberations, and to the tangled rhythms generated by that peculiar hybrid of intoxicated gamelan and urban junk, you can't help but compare the original scope of that apparatus with what it embodies at present. Nobody in the real world would think of performing with a decayed instrument; no one stops a poor man in the street to ask for the story of his life.

On the contrary, this is exactly what this Australian artist does, eliciting incomparably awkward sounds - at times ironic, elsewhere severely introspective. We sit in front of a manifestation of uncompromising discord, born from a sonic organism that was originally created to be divided in small fractions of acoustic ordinariness. Now everything is fused in an unbreakable aura of dissonance whose morphology is nevertheless totally congenial to these ears. It's an inspiring experience that leaves us pondering about the pointlessness of perfection while appreciating the influence of mutability on what humans call 'music' after having injected a good dose of customary triviality to an otherwise unstructured radiance. Yet the upper partials emitted by Bolleter's perished boxes need no intervention, shaping the surrounding environment with their past glory transmuted into transcendental tolls and glowingly malformed heterogeneity."

"Ross Bolleter has devoted himself to ruined pianos: instruments found exposed - in different degrees - to the elements, having in that exposure developed a quirky originality, radically at odds with the piano's usual ideal of uniformity. Cracked soundboards vibrate with strings that have wandered wildly out of tune, a string resonates, sounding through different pitches, seemingly at will.

The very unpredictability of these instruments resists composition and Bolleter has devoted himself to improvising on them. Most of this CD is devoted to night-time improvisations in the Bolleter kitchen, where he has set up four of these pianos in such a way that he can play them simultaneously. Inspired by Goya's black paintings and Australian landscape photography, Bolleter creates coherent art out of his instruments' idiosyncrasies, calling up sounds akin to gongs, assorted percussion, string drums, and de-tuned zithers. Bolleter is a fascinating musician who has found a sound source and an ecology largely his own."