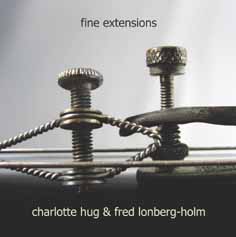 The activity of calibrating requires two parts, a variable and a standard. Through the relativity of comparison (here’s a gear, here’s another; how do they fit together?), components can be adjusted to function properly, to run smoothly and mesh in perfect tandem. That’s the way a machine can be fine-tuned.

The Charlotte Hug / Fred Lonberg-Holm duo is a machine of sorts. Not, of course, in the sterile, robotic, functional sense, but in the sense that together they enjoy a rare kind of calibration, a fine-tuning that one hears infrequently in improvised music, only from the very best collaborators. That they are string players means they come equipped – and burdened – with a lot of baggage, the kinds of classical associations from which it can be difficult to break free. The fussiness of intonation and phraseological inflexibility that one associates with everyday string players is nowhere to be found in Hug’s incisive, spectral viola, or in Lonberg-Holm’s rich, earthen cello.

When they play together, they become a unified machine, not because they do the same thing or play in unison, but precisely because they each have a part and they play it. And they play it together, as if the music was coming from a common place or meeting in a common place, part of a crystal clear operation the logic of which is fine-tuned in the moment of its unfolding, by means of listening and responding and initiating. And more listening. They have the reliability of a Swiss watch, its innards all working towards the single goal of keeping time, but in this case it’s not mechanistic in the same way, the parts are all constantly changing, morphing, the one little gear is growing bigger or shrinking or getting more teeth or differently shaped cogs, so the other gear has to adjust immediately to keep up the proper torque.

Some Oulipo writers have insisted that any system, any procedure designed as a constraint for writing, needs to 'creak' a little. That is to say, it has to swing, to give a bit; the gears have to change shape, if only to keep things interesting. There’s a lot of creaking going on here. Listen as Hug goes low, laying down a growling drone, meanwhile Lonberg-Holm squeaks and pops up top. Intensity and excitement, fission energy compacted into a chamber twosome.

Exactitude without fuss, and with a bit of creak – that’s fine-tuning. A good reminder: It takes two.

"I am totally seduced by this record. Here’s a well assorted pair of improvisers. Hug’s viola, often whining, swishing, or singing a bitter song, fits perfectly with Lonberg-Holm’s squarer sound. These two make a brilliant unlikely pair. A treat for free improvisation fans."

"This duo adds to the impressive array of improvising string recordings already on Emanem. The viola and cello overlap in the pitches they can produce, so the combination makes for fascinating listening; mainly, their sounds are distinct enough to be clearly distinguishable, but sometimes they play in similar ranges so that they blend together more. Hug and Lonberg-Holm have history dating back to Chicago in 2005, with their first duo album having been released in 2006 on the hard-to-find (and rarely reviewed) Flying Aspidistras label.

Given that history, the two should know each other well enough to avoid an awkward tentative period at the start. Nonetheless, the start of Part One is most reminiscent of birdsong, with each player sending out their trademark call to identify themselves. If that suggests competition between the two players, with them staking out the territory they intend to occupy, thankfully it never materialises. Overall, the reality is more akin to birds' mating rituals than to the daily dawn chorus. Soon viola and cello are engaging in rapid-fire call-and-responses, leading to sympathetic passages in which they interweave sustained notes to produce a harmonizing drone.

Across three varied and contrasting pieces they do display familiarity with each other's playing through their rapid responses. Occasionally one will generate a snippet of melody that is picked up and repeated, back-and-forth, before fading away and being subsumed into the whole. Throughout, they make good use of dynamics, with the volume and pace intermittently falling to allow for quiet passages full of small, detailed sounds. Such passages do not sound premeditated, instead emerging as a natural consequence of their interactions. Remarkably, the entire album is devoid of any music that is reminiscent of the instruments' roles in classical music or in string arrangements deployed in jazz or rock - one reason it sounds so fresh, every time it is played.

Towards the end of Part Two, Hug begins using her voice as another sound layer to complement the two instruments, melding with her viola playing to good effect. At times, she vocalises rather than sings, frequently producing eerie, other-worldly sounds that serve as a reminder of her penchant for performing in odd locations.

Hug's singing continues on Part Three which acts as the album's tailpiece. She sings properly, letting her voice soar in a quasi-operatic style reminiscent of a soprano's warm-up exercises. With the voice offset by harmonising string drones, it brings the album to an excellent close."

"The great invention of this album's music is not so much technical innovation, or extending the sound palette of each of the instruments. Rather, violist/singer Charlotte Hug and cellist Fred Lonberg-Holm embrace the very anatomy of each instrument, including the sound palette that each is endowed with. Thus, there is an almost human relationship that rubs shoulders with an industrial one, encompassing sound design that prompts unfettered exploration. Hug drives the music in a forward motion, undulating and almost threatening to take it vertically. This is only a ploy; an invitation to Lonberg-Holm to slide in his attack, groaning from bottom to top. Once their voices entwine, there is an ocean of sound that results from Hug's myriad overtones, like frank notes played boldly, but with a soft bow. Then there is the suggestion that the music will be goaded by one or the other - pushed, twisted, swerving, yet hip to each push from cello or viola into a new sonic stratosphere.

It is sometimes impossible to separate the sensibilities of the two musicians, despite the fact they come from two opposing sound spectrums and collide to make a third. Each has developed a unique grammatical approach to the language of their instruments. Yet both Hug and Lonberg-Holm succeed in expanding the literature of improvised music, making this very thing possible because they refuse to be cowed down by conventional tonal spatulas. Thus the cello becomes the doppelganger of the viola, as it squeals delightfully, goading the viola to moan with terrible human pain, almost as if the anatomies of the two instruments were interchanged.

On this path-breaking album, Hug and Lonberg-Holm succeed in breathing new life into their instruments as they interrelate - not just as improvising musicians, but simply as two classic instruments, launching into a relationship where one rises to complete the life of the other, and vice versa."

"The violist Charlotte Hug knocked me out when I heard her Emanem solo disc earlier in the millennium: she's a virtuoso uninterested in showing off, an intensely emotional player devoid of mere sentiment or cliché, and a bracing individualist. Since then I've loved hearing her in large ensembles, chamber ensembles (see especially the Stellari String Quartet), and in a series of vivid duos, most recently with Elliott Sharp. The at times ethereal sound of her 'soft bow' technique can be deceptive, as it's unfailingly intense (at least to my ears) even when not demonstratively active. She's thus a great partner for cellist Lonberg-Holm, who is marvellously resourceful, noisy and creaky and at times unexpectedly ebullient. A three-part improvisation from a 2009 Zurich date, this one is off like a shot, with a riotous outpouring of clacking wood, overtones, maniacal sawing and sheer thrill. It's almost impossible to keep score of the many spaces they visit, but I would certainly single out the performance's exemplary middle section: it sounds almost like one of those string-section conversations from an old Warner Bros. cartoon soundtrack, filtered through a cold winter barn in which flourishes some kind of Dostoyevskyan hillbilly madness. What comes through most clearly is the sheer range of sound (heady hush, detuned burbles, even a brief vocal contribution from Hug) and the sheer exuberance and invention of the playing."