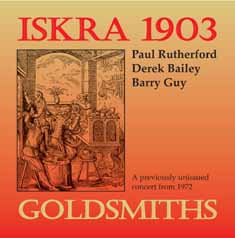 Iskra 1903 was one of my favourite groups. I cannot remember hearing a performance that I did not enjoy, although inevitably some were better than others. The previously unissued concert on this CD was arguably one of their best.

I first heard this recording about ten years ago, when Paul Rutherford gave me his reel-to-reel copy. I made listening copies for the three musicians, all of whom wanted it to be issued complete. The trouble was the original tapes were last heard of in California. Rutherford's copy tape was pretty good, but I hoped that the originals would have a bit less distortion.

Ten years later, two of the members of the trio are no longer with us, and I still await two of the tapes. One original tape did turn up just as I sent this CD off for release earlier this year. So everything was put on hold hoping that the other two would surface. Nothing has happened six months later, so I have decided to issue this concert using the one available original tape as the source for the first section and the copy tape for the rest. Something else that did turn up was a badly balanced recording of another gig from that period, which yielded two usable sections.

The bulk of this CD is arguably the most typical extended concert performance of the original trio to have survived. The occasion was just a local gig in the Cohesion series at Goldsmiths College in south-east London in front of a small audience. The trio playing on home territory, as it were, and sounding very relaxed.

Paul Rutherford formed the first edition of Iskra 1903 in 1970 with Derek Bailey and Barry Guy. All three musicians had worked together in larger groups, starting off with the 1966/7 edition of the Spontaneous Music Ensemble that can be heard on WITHDRAWAL (Emanem 5040). However, they had a strong desire to work without percussion. It's not that they were anti-percussion - each of them subsequently worked in various settings with numerous percussionists - it's just that they felt a need for this sort of instrumentation as well.

Rutherford named the group after 'Iskra' (the Russian word for spark) which was the paper that Lenin edited before the Russian Revolution. The '19' indicates 20th century music, and the '03' is the number of performers.

This first version of Iskra 1903 lasted about four years, during which time they were rightly considered to be one of the very finest groups around. Other examples of their 1970-2 work can be heard on the 3-CD set CHAPTER ONE (Emanem 5311). Also, somewhat untypical music designed for a film can be heard on BUZZ SOUNDTRACK (Emanem 4066). Iskra 1903 was, perhaps, the last long-term fixed-personnel group that Bailey worked in.

When Rutherford reformed the trio in about 1977, it was with Philipp Wachsmann and Barry Guy - a trio that performed sporadically for about 15 years (hear CHAPTER TWO on Emanem 4303, FRANKFURT 1991 on Emanem 4051 and their eponymous 1992 CD on Maya 9502). Like the original trio, it was a group that always seemed to produce great music.

"Life is full of surprises… and some of them we owe to Emanem's Martin Davidson's patience and stubbornness. While two of Iskra 1903's three original members are now dead, he managed to find us a previously unreleased concert from 1972! And a very good concert at that. This trio was one of England's seminal free improvisation groups. Its non-idiomatic approach was radical then and has aged very well. On GOLDSMITHS, trombone, guitar and double bass dance a complex waltz where partners in turn interact with and ignore each other, consistently defying expectations. Sound quality is satisfying given the age and nature of these recordings. And here we have an opus from that line-up of Iskra 1903 that is both less expensive than the CHAPTER ONE set and more representative than BUZZ SOUNDTRACK."

"This first version of Iskra 1903 was one of the more revered improvising groups of the time, a summit meeting of three first-rate players. The absence of drums helped give the music a sense of lightness and freedom. From the start, it is obvious that Rutherford is the leading light, as the trombone is more to the fore, with guitar and bass interweaving with it to create a rich tapestry of sound. The (post hoc?) titling of the Goldsmiths concert pieces with the word Cohesion is spot on; the three combine together into one entity. As always, Rutherford's trombone playing is an all-too-human voice, imbued with a wealth of contrasting emotions including tenderness, humour, pathos and mischief.

Ultimately, GOLDSMITHS leaves an aura of happy sadness: the sadness, caused by the realisation of the huge gap left by the deaths of Bailey and Rutherford; the happiness, by the discovery of this wonderful recording as a reminder of that loss. This album captures the trio in peak form and seems likely to become the first-choice recommended recording by the group."

"The early years of British free improvisation gave rise to a series of paradigm-shifting ensembles, among them AMM, John Stevens' ever-changing Spontaneous Music Ensemble and the duo of Evan Parker and Paul Lytton. Iskra 1903 - Paul Rutherford, Derek Bailey and Barry Guy - belongs on that list. The group embodied a libertarian, collectivist music that dispensed with past structural references with the descriptive term 'non-idiomatic'.

Apart from live performances, the group's reputation long depended on one brilliant 1972 recording on Incus, since reissued and supplemented on a three-CD set called CHAPTER ONE. GOLDSMITHS presents a previously unreleased performance by the group recorded at the London college of the same name. 40 years later the music may be less surprising than it was in March 1972, but it's still fresh and brilliant. This is genuinely free collective improvisation: lead voices may emerge at times, but it's rare that you'll want to follow a single part for an extended period. Instead it's the constant weaving of parts, the way one line will complement or even finish another, the sense of microtonal shifts and adjustments as lines fuse and disperse and one nuance inflects another. There's an uncanny collective wisdom around matters of dynamics and density, a split-second responsiveness to one another's impulses and disconnections.

The opening half-hour dialogue, titled Cohesion 1A, is the most expansive work here, setting a pattern for detailed interaction and shifting sonics that will give rise to later textural interludes. While Bailey and Guy are both amplified, it's not simply a matter of making them louder; instead, there's an acute sense of bringing near-silent sonic events into the foreground of the band's on-going patterns of response, contradiction and reconciliation. This is a masterwork of early English free improvisation and an excellent introduction to a great band."

"This is music about 'playing' in the active sense, far from the prevailing 'cool-and-detached' view of English improvisation. That doesn't mean that the music necessarily has to be loud or dense to present action, movement, and expressiveness. Rutherford, Bailey and Guy are experts in orchestration, telescoping across intervals or fiddling bullishly against microscopic plinks. Their sound palettes are vast - Rutherford uses various mutes and percussive devices alongside his already incredible vocal-brass range, while Guy and Bailey abet their instruments with volume pedals and low-grade amplification. In a way, the Goldsmiths set's middling fidelity (not bad, just not 'crisp') brings out curious sonic aspects of the trio - horizontal guitar scrapes and pedal-actuated glissandi are rough and hairy, rather than precise audio images. Plungers and bowed harmonics become distant, alien growls and refractions (check out Cohesion 1B). If brilliantly skewed chamber improvisation is your thing, and Iskra 1903 hasn't come up in your listening, GOLDSMITHS is an excellent place to start. For those already well heeled on the Emanem stable, the disc is a beautiful reminder of just how bright and engaging British free music can be."

"The musical value of the trio's innovations is demonstrated clearly on the four tracks recorded at London's Goldsmiths College in 1972, especially the two parts of Cohesion 2. Following more than four decades of exposure to reductionist sounds, it's difficult to imagine how freaky and unconventional these performances must have been, particularly in a Jazz scene preoccupied with the rewards of Jazz-Rock fusion. Instead the band, made up of a barely amplified guitarist, multiphonic exploring trombonist and a bassist eschewing a steady beat. Exposed, individualized abrasive timbres miraculously seem to sunder together like jigsaw puzzle pieces.

On Cohesion 2 Bailey's metallic-sounding resonations and below-the-bridge plinks sidle up against Guy's muscular plucks as Rutherford works his way in, out and around the string continuum with whistling plunger extensions and buzzing textural rephrasing. Making up duo counterpoint with each of his partners in turn, the trombonist is particularly effective in the last section of Cohesion 2A when throaty slide swallows plus a droning ostinato from the bassist are blended. The guitarist's harsh and hard responsive string action is carried on into Cohesion 2B. As the percussive and oscillating guitar licks harden, they narrow in pitch to complement Guy's spicccato string pops and wood thumps. Meanwhile Rutherford's thickened tongue guffaws solidify, decisively contrasting with the bassist's string slaps and Bailey's amp distorted undulations and abrasive string scratches. At the conclusion, the guitarist's strokes turn to sustained fills as the trombonist's wide-bore gurgles move to vibrating tongue action and finally silence.

A notable variant of this continuum is also apparent on the nearly 30-minute Cohesion 1A. Before it too fades - or the tape reel had to be changed - the trio creates another instance of microtonal multiphonics. Guy is more upfront with slippery pumps and intervallic sprawls, as Bailey concentrates on foreshortened plinks, snapping flanges and recessed clanks. Meanwhile Rutherford's burgeoning skills multiples his brass expansion, often sounding two distant tones at once. Barely there puffs are exposed alongside lowing guffaws, while extended mouthpiece mutters and cries are balanced by slippery pumping, rubato guffaws and spittle encrusted buzzing through the horn's body tube. All the while Bailey strums forcefully if distantly. With so many fungible and undefined lines, the track appears to exist in its own space-time rather than beginning or ending."

"Refusal of counter-intuitive cogitation, intelligent regard for an instantaneously generated spatial arrangement, total control of the conversational dynamics, respect for an audience that never gets overwhelmed but rather entangled in the constitutional mechanics of the instrumental interaction. Valiant artists looking relaxed in the most important type of research, that which didn't (and, for a multitude of unconnected musicians, still doesn't) warrant too many helpings of bread and butter. Fine art to revere for decades to come."