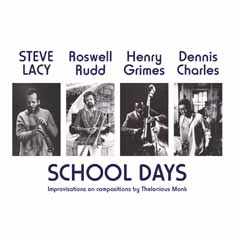 Steve Lacy was originally attracted to older jazz forms, mainly playing with musicians whose careers had started before he was born (in 1934). Then Cecil Taylor plucked him out of this old world, and Lacy made the quantum leap to appear on Taylor's first two recordings, JAZZ ADVANCE (Transition, later Blue Note) and AT NEWPORT 1957 (Verve), both of which also feature Dennis Charles. He was also spotted by Gil Evans who featured him on two of his finest albums, GIL EVANS AND TEN (Prestige) and GREAT JAZZ STANDARDS (Pacific Jazz, later Blue Note).

Thelonious Monk's music also entered Lacy's playing around this time, and on the first LP under his name, SOPRANO SAX (Prestige), he included a version of Work that Monk praised for being played properly. His second LP, REFLECTIONS (Prestige), was probably the first album containing only Monk tunes by anyone other than Monk.

Lacy actually joined Monk's band for the summer of 1960 - see Ira Gitler's article - but the only recorded souvenirs are the two tunes broadcast from a festival in Philadelphia. (The start of a third piece, Rhythm-a-ning was also recorded, but interrupted just as Lacy began his solo, so it has not been included here.) When I played this broadcast to Lacy in 1974, he was pleasantly surprised at how good he sounded even though he remembered feeling rather overwhelmed at the time. During or shortly after his period with Monk, Lacy made his third name LP, THE STRAIGHT HORN (Candid) using Monk's rhythm section, and a year later made his fourth, EVIDENCE (Prestige), both of which contained several Monk tunes.

The quartet with Roswell Rudd and Dennis Charles and a succession of bassists followed and lasted for about two and a half years from 1961 to 1964. This had a repertoire of about fifty Monk tunes, plus a few by Cecil Taylor and Kurt Weill. SCHOOL DAYS was the first recording to be issued of this superb quartet. They did record twice for major record companies who either sat on or rejected the resultant tapes. The 'sat on' session was eventually issued in 2007 on EARLY AND LATE (Cuneiform) - the 'rejected' one vanished long ago. See my interview with Lacy for further comments about this period.

Fortunately, Vashkar Nandy and Paul Haines had the sense to record the band, and even if this mono recording made with one microphone (Jimmy Giuffre's) is not perfect, it is infinitely better than the silence that would have otherwise ensued (and much clearer and realistic than many studio recordings of jazz made since then). The end result is all the music recorded one evening about half way through the life of the quartet - an informal recording of an informal gig containing some of the best playing on record by all of the musicians.

This reissue presents the pieces in the order they were recorded for the first time. Henry Grimes is absent from the first two tracks because he arrived late for the gig. The first half of Pannonica is missing, probably because someone forgot to press the record button. Both the surviving ending of this, and the whole of the other trio track, Bye-Ya, contain such incredible interplay from the two horns as they try to make up for the missing bass player. It's almost as though they were still playing in the Dixieland bands they started off in.

All the tunes are played the way Monk played them, although the double-time figures on Monk's Mood are a bit of a liberty. The improvisations are superb and original whilst remaining appropriate for the Monk pieces. (Note that towards the end of his solo on Ba-Lue Bolivar Ba-Lues-Are, Henry Grimes quotes from Oscar Pettiford's solo on the original Monk recording.)

Everyone went their different ways after the break-up of this band. By the mid-1960s, Lacy was into free improvisation, using no pre-composed material at all. Then by the end of that decade he moved to Europe and started writing compositions that, whilst being very personal and distinctive, also showed the influence of Monk's conciseness and sense of structure. He went on to write a couple of hundred pieces that formed the basis for most of his subsequent performances. However, the arrival of ERONEL (Horo) in 1979 announced that he was also playing Monk's music again.

The period around 1975 (when SCHOOL DAYS was first issued) was not a good time for any of the quartet. Lacy was just beginning to get some recognition as a composer and group leader, but there were very few of his records available. After being one of the leading lights of the Free Jazz movement in the 1960s, Rudd had little opportunity to continue in that idiom. The initial release of SCHOOL DAYS did inspire a reunion recording - TRICKLES (Black Saint) - with Lacy, Rudd, Kent Carter and Beaver Harris playing Lacy's pieces. A couple of weeks later, Rudd organised an LP involving a remarkable variety of musicians including Lacy - BLOWN BONE (Japanese Philips, later Emanem 4131). There were several other Lacy/Rudd reunions later on.

Dennis Charles was not making music in 1975, although I did meet him in the audience at the Five Spot. He was then living in a wreck of a building in Harlem when I first visited him, but managed to relocate downtown shortly afterwards. He did start playing again in 1979 - I remember going with Lacy to hear him play with Claude Lawrence in a Greenwich Village venue. This turned out to be the beginning of a second career for him (with his first name shortened to Denis), and his Virgin Islands upbringing combined with a strong Art Blakey influence went on to enliven many a group. He even had a couple of reunions with Lacy - CAPERS (Hat Hut) and THE FLAME (Soul Note).

Henry Grimes completely vanished in the late 1960s, only to be found some 35 years later in Los Angeles. After such a long absence he simply picked up a bass and started playing again - just like that, apparently!

I stayed in NY for two weeks, only leaving Manhattan to take the standard tourist boat trip around the island. A lady on the plane had taken an interest in my plans, and when I told her that I didn't think there would be time to experience more than what Manhattan had to offer, she implored me, 'Please don't judge America by what you see there!'

She had a point. In a bar on Bleeker Street called the Take Three, I was able to hear the Cecil Taylor trio with Jimmy Lyons and Sunny Murray before their first trip to Europe where they made the epoch-making Cafe Montmartre recordings. I heard the Eric Dolphy Quintet at Birdland with Edward Armour, Herbie Hancock, Richard Davis and J.C.Moses - amazing!

And the legendary 'School Days' band at a coffee shop in the West Village called Phase Two. A select audience of coffee drinkers were witness to a band whose original intention had been to memorise the complete works of Ellington, Parker and Monk. This enormous ambition had given way to the more realistic decision to focus on Monk.

Unaware of this at the time, but knowing Steve as a great soloist on two Gil Evans records, I was there primarily to hear Steve. I heard Roswell warming up, working through the overtone series on fixed slide positions with a clarity and incision that I had not heard from a trombone before. I am not sure who was playing bass that night - it is said that 29 different bass players worked with the band during its lifetime. I think it was Dennis Charles on drums.

At the end of the first set, Steve's announcement reminded us that the band was 'happy to play requests.... (suitable pause) ....we'll play any tune by Thelonious Monk.'

Even then I was keen to get closer to the action and, as the band reassembled for the second set, I asked Steve for 'Four in One', the trickiest line I could think of. 'We can play that,' he said and they did.

What a band, what a programme, and here's the Evidence.