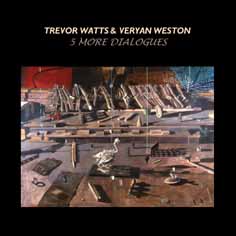 Here are two men whose musical natures are obviously rich and their backgrounds complex - back to Stinky Winkles in the pianist's case, back to Amalgam and the Spontaneous Music Ensemble in the saxophonist's - but who reduce, in the critic/analyst's shorthand, to tiling or fabric. Tessellations. Moiré. Does that convey all you need to know about Veryan Weston and Trevor Watts, secure in the understanding that these are self-chosen metaphors, not imposed from outside? Needless to say, no, but it's worth thinking what the respective imagery conveys: a sense of interlocking pattern, repetition, system, logic, an Apollonian veering toward order on the one side; a shifting, shimmering, never-the-same-twice movement on the other. Hard surfaces and single notes. Liquid movement, everything blurred together. Piano. Saxophone.

That would do, but as the music contained here immediately and repeatedly confirms, the verbal equivalences never quite work and never have. Watts's sense of order, of structured improvisation and almost fractal form has always been very highly developed, and Weston frequently intersperses passages of almost algebraic directness with vast clouds - clusters is too bitty a word - of sonic material.

These are men who have strongly established life-scripts, or personal 'styles'. It is impossible to mistake Trevor Watts for any other saxophonist, and even more remarkably, given the nature of his instrument, Veryan Weston for any other piano player. They are deeply imprinted, but they are also decisive and free, and they are capable of command, fruitful antagonism and playful 'pastimes', moments where the interplay between them is cheerfully emptied of any graspable signification. If that sounds as if small talk has been elevated into art, that may well be it, because here are two musicians who almost uniquely manage to resist verbal corralling. They are what they are because they are what they play, and they play like that because of what they are, which is defined by how they play. It is strangely but rightly difficult after a time to determine who is proposing what, who is leading and who responding, who is advancing a position and who is subverting it.

"5 MORE DIALOGUES offers more in the way of fascinating elaborations by long-time collaborators, pianist Veryan Weston and saxophonist Trevor Watts, both heralded artisans of the British progressive jazz and improvisational circuit. A mark of invention pervades throughout, as the duo fuses sublime persuasions, inverted theme-building jaunts, and mesmeric passages with fleeting melodies and rhythmical dynamics.

Highlighted by a manifold approach to the program, the duo aligns a throng of angular discourses, generating an intimate, probing and somewhat mischievous sequence of dialogues on Exchanged Frequencies, abetted by jovial mimicking and edgy overtones. Watts' whispery soprano sax lines contain a myriad of linear ebbs and flows amid Weston's punctuating block chords and trickling, single-note developments. The musicians elucidate a buoyant progression of flirtatious encounters via eloquent expansionism, also dispersing loops into smaller sections to synergistically create a multi-part and excitable storyline with a busy, yet productive string of events.

Other than the highly artistic attributes, the duo's resiliency, superior technical acumen and rapidly conceived subplots engender a program that towers above similar endeavours by other prominent and lesser-known improvisers. 5 MORE DIALOGUES is a comprehensive and effervescent portrayal of the finer points of improvised music."

"Their conversations, garrulous and engaged in a monumental dissertation about life, emerge from out of a bottomless musical vortex. Such is the power and energy of 5 MORE DIALOGUES - the salvoes of arpeggios, from the hands of Veryan Weston, and the breathtaking glissandi, from the breath of Trevor Watts - that the gloom of nothingness into which the music pours that silence is not merely shattered, it is reborn, with angular echoes and ghostly whispers amid the melodious caterwauling of Weston's flying right hand and Watts' sleight of hand. Then, as Watts bellows as low as he can on his alto saxophone, there is relative calm before the wild energy is again conjured up from the depths of the sonic vortex. This time, Weston and Watts chase each other as if on a freewheeling gambol across a vast and empty landscape, waiting to be daubed with mellow shades and tones from piano and saxophone alike.

These acclaimed virtuosos then switch gears as they become entwined around on another. Irrespective of who chases whom, melodicism is rampant and harmonics are rarefied and beautiful, as a sort of dance of the double helix ensues. This is, at times, slow and tentative, yet brilliantly attractive as a primitive courtship. Then, as confidence is assured, the inevitable happens: the swagger and verve accelerates the intertwining ballet between piano and saxophone. The melody is heated up by sweltering yowling on soprano, and then again by the proximity of piano and saxophone - as if much too close together, as lovers often are, the double helix twisting and turning maddeningly, making music. This is as primordial as it could get, and yet the magic lingers in chart after chart. It feels as if dawn has been hung upon the waking sky by the dream-like pirouetting of piano and saxophone.

This is as much about the freefalling melodies interwoven by harmonic extravagance and kept alive by a variable rhythmic attack as it is about the exploration of pure sound itself. Thus, when Weston and Watts upturn what seems like a musical hourglass to deconstruct their musical architecture, they appear to reverse their musical premises and again build a sonic edifice. Things appear to move in fits and starts at times, but always there is a sense of where they once were and where they are going, albeit with the element of surprise at where the proceedings have led them. Moreover, the exploration is deep and constant, as if Weston and Watts are compelled to move forward, always changing as they pursue some kind of Holy Grail.

There may be no real beginning or end to 5 MORE DIALOGUES. These are musicians captured in the midst of their startling musicality, as they search for what may be described as a truly edifying place in time - making it a breathtaking journey in which to participate. "

"Playing in its most naked form derives from interaction of two or more individuals through shared dialogue, and one can hear in the immediacy of the rapport between Weston and Watts the gestation of compositional ideas as well as unfettered spontaneity. Associated early on with the Spontaneous Music Ensemble, from its initial head-solos-head compositions to more non-idiomatic music, and his own free-jazz-rock and West African-influenced Amalgam (and later, Moire Music), Watts is a partner whose language draws from an incredibly diverse range of sources and is, even at its most open, beholden to form.

Starting the proceedings on alto, cutworm finds Watts digging deeply into his Johnny Hodges bag, skirling soulfully outward from roiling chordal interstices (I suppose that if Jeep and Dave Burrell had recorded a duo, it might have sounded something like this). Weston is neither singly a carpet-weaver nor sparring partner, countering and supporting with glassine airiness and dense arpeggiated landscapes as well as high-stepping left hand progressions. They are a divergent pair and that's partly what makes the Weston-Watts duo so compelling, for they have different concepts of angularity and smoothness that, beyond the limits of instrumentation, create dissonant complements. In one area, the saxophonist's acrid flights may be vocal and fizzy while Weston's responses are chunky, scattered and insistent.

The soprano-piano duets, represented well by Exchanged Frequencies, don't call to mind Steve Lacy and Mal Waldron (the obvious precedent), clanging tone rows and painterly eddies (circular and linear motifs) giving charge to Watts' agitated, particulate trills. There are upper-register corners from Weston's right hand engaging pinched repetition, but the players have a tendency to never stay in one place too long, moving just as easily into a ballad of smoke and dust. Mutability doesn't negate form or an interest in maintaining structure, but the reality of process also doesn't necessarily dictate that these two musicians should end up right back where they began. Elegant, delicate and full of a coarse energy, on 5 MORE DIALOGUES Trevor Watts and Veryan Weston present a kind of immediacy that's shapely and constant. It's a sound world all their own."