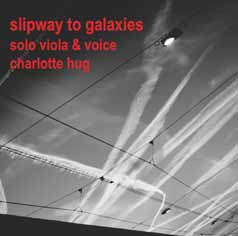 The viola rings true. Charlotte Hug's intense interaction with Celtic myth also rings true. Swiftly and deftly her fingers and bow flit over the strings - not always but often very quickly - similarly ringing true. Yet Charlotte Hug is not a folklorist and does not quote from Celtic or Irish folk music.

Transition - that is the key concept, under which this music may be conceived. Transition: of the Celtic voice techniques which Charlotte Hug studied and learned at their source, in the timbre of her own voice; of the exploration and inspiration of old myths within abstract art. For she is not simply a story-teller and has no wish to be. As intangible as the associations that arise, spring forth and flow on hearing her music, so the end result of her music is heard and experienced as independent and entirely detached from any kind of external musical connotations and context.

Charlotte Hug has returned again and again to sound research and has developed new playing techniques such as the soft bow and the wet bow for her viola. She has learned various voice techniques and, through a combination and modification of these, she has found her own unique voice. She has experimented with Live-Electronics and carried these experiences over into pure acoustic playing. She is seeking to reveal the hidden qualities of basic sound. These are ostensibly simply technical details. But they are driven by musical ideas. When making music, the unusual locations, such as an abandoned harbour, an old damp prison, or the Rhône glacier, serve as catalysts, or occasionally furnish concrete changes, such as the damp or the cold. Close listening is, for her as a musician, a process of musical thinking, in which the detail is played and responded to. But above all it is the changes which fascinate Charlotte Hug, whether in nature or in culture, in locations, in history or in art, in music, as in her drawings. Her music changes constantly. She is like a glancing river, changing her colour or her intensity, not always dramatically, often by nuances. Then again, she creates sharp contrasts of sound, moves back and forth between extremes, with ebb and flow - between pure tone and sound: one hears perhaps a sound wrap or a continuous transition of compressed or tonally pure sounds, extending into a diffused, fragile rustling, often multiple, multi-vocal - even more so when her voice enters the work.

Even the genesis of the music relies on change. It emerges in the changes of media used by Charlotte Hug: viola and voice on the one hand, graphite pencil and semi-transparent paper on the other. Up to now she has usually first improvised, then drawn while listening to recordings of her improvisations, and then has used these drawings (the Son-Icons, as they have been so aptly termed) as flexible graphic scores and as new stimuli for improvisation. Now she has changed the process of creating the Son-Icons. She has brought the music and graphic elements even closer together, by presenting her improvisation of viola and voice, while also improvising in her drawing. The transformation of sound into image takes place simultaneously, while the drawing - the visual picture as well as the haptic movement and gesture - simultaneously transforms, transmutes and alters the musical, even if in this case it is 'only' to inspire and continue the performance in question. Transformation, therefore, in the work of Charlotte Hug, signifies not a simple or clear-cut shift or transfer from one medium into another - or even the expressive visualisation of sounds. The media are much more tightly interlocked. Charlotte Hug develops the same artistic idea in each of the media. Drawing and music-making are each at the same time catalysts, each one the horizon of experience for the other artistic medium.

"Hug is an instinctive improviser and SLIPWAY TO GALAXIES tells us that her vision, as it broadens, is also becoming more personal and specific about its expressive intentions. Hug's 'trick' is that she incorporates her vocalisations inside the unfolding patterns of her viola; except it's no trick at all - gesturally and harmonically, timbrally too, Hug has magick'ed up with what's effectively a hybrid 'instrument' that only she can access. The extended opening piece, Anderwelten, space-walks around galaxies of interlaced glissandi that refuse to settle into any comforting fundamentals until suddenly we make landfall with Celtic-derived reels and vocal inflections. If there's a composerly sense of form here, other pieces, like Atman, are more like moment-to-moment studies of base primary colours. An important record, I'd say."

"This is Swiss violist Hug's third solo recording to document a progression of ideas initiated in 1999. This disc is marked by two distinctions: it's the first to which Hug adds her voice as a frequent component; it's also marked by a subtle influence of Celtic music. This is a disc that's careful to note that no electronics or overdubbing were employed in its making, and it's good to know, for otherwise one would likely assume that Hug was modifying and layering her performance. It's immediate, technically daunting work of a rare virtuosity, but as with the best improvised music that technique is in the service of the mystery of creation. Multiple lines emerge from the viola as Hug bows gradually shifting drones beneath evolving lines, demonstrating a remarkable mastery of muting sounds to create rhythmic distinctions, while elsewhere multiple timbres emerge simultaneously. What's most significant here is that there's no exhibitionism in the technique: it's all concentrated focus, a meditation at once on resonances and the mechanics of hands, strings and bow, an expanding musical consciousness that gradually takes in voice to create a compelling sonic universe. Within that world there's tremendous variety in her materials: Exhilaration develops its sonic materials in a suite-like way, moving from near-electronic whistling harmonics to brief, strongly melodic materials to loose-bowed, circular passages that sound like they're played backwards. On Atman, she creates percussive click languages that pass back and forth between viola and voice, the two becoming briefly indistinguishable. While Hug can at times overwhelm a listener with the sheer density of her musical conception, it's just as compelling when she scales back her resources, as in the mysterious and spare beauty of the microtonal Holy Ground" Throughout it's fascinating and subtle music, clearly the expression of an individual even when it's hard to imagine it being performed by one."

"There has always been something special about a performance by Charlotte Hug. Her revolutionary playing celebrated in the unique 'soft-bowing' technique has turned the shrill glissandi of the viola into hues of deep, indulgent warmth. As her passion for the human interaction with her instrument developed, she began to meld her unique vocalistics into her artful reinvention of the viola and her music. Although nothing about her work may ever be described as typical, SLIPWAY TO GALAXIES is a fine example of the fine and heady mixture of Hug's musical odysseys. Here, she wakes the spirits of worlds unknown and lures them with her playing, vocalising and dancing into the flesh, where they begin to rock and sway in timeless unison. Ever the bewitching artiste, Hug conjures up a sonic storm that seems to unite her with realms unknown, as viola and voice, music and dance make their majestic entrance into the body and soul of anyone who will listen.

In track after track, Hug explores the purity of sound. In vocalising her music, she becomes, at various times, a banshee, and more often than not - and in her devastatingly beautiful Celtic incarnation - a 'bean caoineadh', that crying woman keening her way to a veritable celebration of life over death. This is the mystical beauty of Holy Ground, where Hug eulogises the dance of life over death. In the ecstasy of Exhilaration, the incredible lightness of ascent from limbo into an azure state is almost palpable. The uncanny similarities between ancient Irish beliefs and ancient Indian ones is explored in Atman, a chart in which Hug follows the sound of the soul as it soars free of corporeality.

The sonic battles of Anderwelten, Buzz & Fly and Intersect set the ears aflame as legions of imaginary dancers sway and swerve to Hug's heady music. But it is the spectacular music of Cyclic where, once again, the primordial cries of life may be heard in Hug's brave adventure and, more especially, in Slipway to Galaxies, where limbo and the nether world collide with the sound of life everlasting, in which Charlotte Hug reigns supreme. It is here that her world of music awakens the spirits dancing in the flesh."

"The class that transpires from this recording is equivalent to the uplifting qualities that identify the combinations of resourceful whimsicality, tense stasis and brooding transcendence found aplenty in these 65 minutes. Every nuance is unique in this woman's palette. Her singing technique mixes birdcall, astonishment and sufferance (or, if so preferred, makes one's imagination run riot with fantasies about an Ute Wassermann/Meredith Monk hybrid). On the other hand, the unusual methods and absolutely individual jargons informing each droplet of Hug's creative liquids generate, almost preposterously, an uncharacteristic state of respite. It's as if the incessant movement of those undersised sonic molecules produced a substantial texture carrying magnetic powers, this entirely conquered listener rendered inert by a blend of respectful awe and downright enthrallment. In a nutshell, we're approaching Masterpieceland."

"Hug has passed through electronic experimentation on the way to a self-contained solo approach that requires no electricity at all. Instead, she uses a stand of different bows - some wet, some slack, and one that is strung so she can stick her viola in between horsehair and wood. Between them all, she has the resources to extract a vast array of sounds, and even bow all four strings at once whilst periodically striking the instrument's back. And she has paired her viola with every musician's original instrument - her voice, which she uses to even less conventional effect. She whinnies, she growls, she rasps, she coos, and she ululates; she closely harmonizes with her bowing and belts out bold counterpoint. The one thing she doesn't sing is words.

The voice is not only the earliest human instrument, it's the most intimate one. Hug doesn't shy from sounds so primal they seem pre-lingual, even pre-human; her birdlike twitters and brute grunts could be a shaman's channelling of the supernatural aspects of other species as surely as the way she rakes her bow against her viola summons the brittleness of the wood from which the instrument was made. Stuff like this can raise the hackles, and there are points on SLIPWAY TO GALAXIES that do just that; her pairing of spittle-soaked gurgles and a ragged drone on Cyclic brings to mind some awful cannibal feast. But it can also evoke the sublime, as when hoarse cries and high-pitched, long-held notes suggest graceful manoeuvres of birds in formation on Buzz & Fly. The range of sound and emotion at Hug's disposal is operatic, and if her earlier album NEULAND was a solo tour de force, this one represents Hug as a highly accomplished one-woman ensemble."