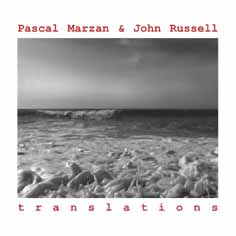 All the pieces that make up this CD are presented here in their entirety. They reflect our mutual explorations discussed in confidence, freedom and exigency since 2005. Dialogues of timbres, interspersed with fragments of chords, rhythms and melodies, parallel plays in imitation or opposition... Conversations browsing the various registers, imaginary and emotional worlds of the guitar abstracted until the disappearance of regular or expected timbres.

Complicity and the freedom to explore music acquired over my meetings in London with John reappear intact in our public concerts. It's like playing 'à la maison' : en toute amitié !

Pascal and I first met in 2004 and our first public appearance was for the indefatigable Adam Bohman as part of his concert series at The Bonnington in London’s Vauxhall district. Since then we have played a number of concerts both in England and France and also recorded our private sessions, excerpts from which, chosen by Pascal, can be found here.

Pascal’s background as a nylon-strung classical guitarist and mine as a steel-strung plectrum player are quite different and this naturally informs our music. We are also first and foremost free improvisers, which for us means not only that the music is not pre-composed but that any sound available on the instrument can be considered as being of possible musical use. Our shared love of the guitar and guitar music in all its forms, coupled with our different musical experiences, means that there is a lot to draw on and I find the duo a continuing delight.

"On the recordings, Russell's steel-strung plectrum playing is heard on the left channel and Marzan's nylon-strung classical guitar on the right, allowing the different contributions of the two to be heard clearly and easily distinguished. Although the two guitars have very different timbres, they blend well as the complementary parts of a coherent totality. The natural playing styles of Russell and Marzan are very different, yet together they adapt to each other and find a common style that allows each to play fluently and freely. When they are in full flow, the music seems to pour out of them smoothly and effortlessly, making it simultaneously relaxing and exhilarating.

On the album's longest track, the 24-minute epic Kuulilennuteetunneliluuk, the pair starts at a brisk pace, spurring each other on and exchanging phrases at speeds that demonstrate their mental and manual sharpness. The piece then settles down to a more sedate tempo, but the technique remains just as impressive. It never sounds as if the two are in competition - no dueling guitars here - but are both totally involved in an enjoyable and engaging game. As Russell says, 'I find the duo a continuing delight.' Yes, it shows.

"Since 1980 Russell has applied to various projects the Latin term 'Quaqua' meaning 'by whatever way'. The word sums up his commitment to the instrument as total configuration, rather than conventionally defined and delimited sound source. Listening to Russell play, you can still discern an element of wonderment at his own exercise of that freedom. It's an aspect of his musicianship that has persisted over many years, and Marzan has it too. Out of their fascination with the guitar's potential, and their sense of being otherwise musically unbounded, arises the motive power for these engrossing exchanges.

Marzan calls them 'dialogues of timbres', and the character of sounds - those plinks, chimes, rounded tones, occasional vigorous scraping and fractured chords - are the audible substance of the music. Of equal importance, though, is its movement, which is neither unidirectional nor goal-oriented. Rather, it's movement as a factor of affinity; the ripening of musical kinship generated by curiosity and the stretching of know-how into zones of discovery. And for those of us who like listening to guitars, it's where a catalogue of soundings becomes the flow of absorbing music."