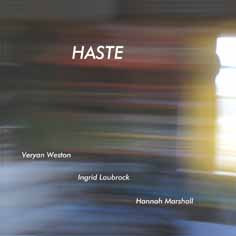 I believe music (when it’s honest) explains itself, and my love and respect for these three musicians discredits me as an objective critic. That’s why I’ll leave all the inspired musical analysis to ‘professionals’ and I will (very briefly and roughly) present another side of the unique phenomenon occurring here.

Someday in the past, these three sensitive and intelligent human beings decided to start creating together, invoking the present through sound like an ancient ritual. From time to time they meet somewhere around the world and form a very small but wonderfully civilised tribe of three. Three individuals equally shamans, farmers, hunters, warriors, children, mothers, fathers, animals, rivers, trees, rocks, particles, voids, energies, planets, galaxies… the three of them playing all the roles with no distinction, with a delicious and exuberant anarchy, in order to invoke the game of LIFE, the here and now, elusive raw material of past and future.

This recording contains a part of one of these rituals: the music captured by this trio in that specific time and space. But somehow it also contains an intricate skein of events, relations, encounters and circumstances that made their own ritual to bring these musicians to this part of the Mediterranean.

On the 9th of February 2011 Haste got together in Barcelona to share with us their idiosyncratic art and humanity. We shared with them some wine, paella, calçots and the beauty of this city. The audience at the auditorium became also a small privileged tribe, gathered to witness this exotiquotidian miracle of generosity and common creativity offered by Hannah, Ingrid and Veryan.

Now, to make the phenomenon even more complex and fascinating, thanks to this CD you might be able to have an inkling of all these facts by listening to the music, making it yours, here and now, but also tomorrow.

"Veryan Weston is one of the most creative musicians in recent times - or, perhaps, ancient times would be closer to the truth, for what is new emanates from the old and what is old gives birth to the new. Weston presides over this conundrum like a medieval apothecary concocting brilliant and powerful and magical potions that take the form of musical scores invented on the spot where time and space collide.

Weston is an artist who follows the prompts of every raw, neural impulse and his music has the pulse of the eternal heartbeat that fibrillates from the centre of his being - his very soul, it would seem. His music is also sharply angled and attracts the life-giving dancing force of solar energy, turning it into a beguiling force that attracts anyone in his musical orbit to invent and create according to the prompts of each of their souls. The result is a masterly force of nature, HASTE, a spectacular record where Weston's musical ingenuity meets the talents of saxophonist Ingrid Laubrock and cellist Hannah Marshall.

Laubrock makes light of every challenging gauntlet that is thrown at her by the pianist and cellist. The saxophonist is in a continuous state of flight. In fact, whether or not she is provoked by the pianist, Laubrock develops wings as she swoops in and out of the musical mosaic that she helps to create. Laubrock has a penchant for mixing registers by inventing phrases and short staccato-like lines that appear to begin where Weston's or Marshall's end. She might, for instance, carve out a musical like that is inside-out, or seem to begin a musical sojourn from the middle of a phrase that she and the other musicians have been tossing around for a brief while. The result is a musical geometry that is comprised of a series of shapes akin to wide parabolas and four dimensional elevations that have quite the mystical quality to them. None of this can mask the absolute nature of Laubrock's virtuosity, which is second only to the wild invention of her playing.

It is in the grand scheme of things that Marshall excels both as a soloist as well as an equal partner in the creation of this music that is so alluring and mesmerizing. She is an equal creator of Sleeping Down Hill, Leaning Up and Courtesy of None. Throughout the reading of these glistening pieces, Marshall shows off her sublime technical abilities, which is marked by spectacular passages of pizzicato and con arco playing. Replacing the absolute bass of the music, Marshall nonetheless shows up with brilliant passages where she reinvents melodic lines, provides spectacular harmonic intervention, and sets the pulse around which much of the music revolves. Together, these three musicians have created an ingenious document where past and present collide revealing a glimpse what might be in a not-so-imaginary future."

"The Haste configuration is very different, a free-improvising trio that only sometimes seems to hurry deliberately, though they often move at an accelerated pace. That notion of speed is central here, a principle that asserts itself within a few minutes in the opening Sleeping Down Hill, the band assuming lift-off after a series of individual entries posed almost as questions, e.g., 'how much extraneous sound can be specifically heard through a bowed or blown harmonic?' Speed, as suggested, comes in two forms: one celebratory in which three very quick players throw off articulated runs that blur in the ear, clouds of sound playing at the edges of cognition. When it's a moment of actual haste, it's an up-rush of data in which the combined results of individuals' fingers and thoughts might deliberately confound one another, resulting in new fractures and new meanings. While Sleeping Down Hill assumes a volume that might be thought of as comfortable, Leaning Up and the brief Courtesy of None often work at very low levels in which the attention already demanded by speed is further attenuated. It's work (for musician and listener alike) that consistently surprises, whether it's Laubrock's articulation (like a gentle machine gun), Weston's at once billowing and blistering keyboard passes, or Marshall's eerily evasive knitwork that simultaneously links and dissolves the myriad connections in the music. It's free improvisation of rare consonance."

"It's an odd name, perhaps, for an album that starts out slowly and hesitantly, but it doesn't take long for things to get cooking. Soprano and tenor saxophonist Ingrid Laubrock first got together with pianist Veryan Weston a few years ago to work on Steve Lacy tunes before joining his existing duo with cellist Hannah Marshall and flying free. But there's still a Lacy-like rigour to their explorations of interval and line in this set recorded live in Barcelona last year. The ear for pitch is acute and the interactivity impressive throughout, with Marshall's impeccable timing and skill for finding strong yet subtle gestures a noticeable asset in navigating the complex, high-speed exchange of ideas between Laubrock and Weston, who proves once again that there's still plenty of mileage to be had from a piano without having to delve inside it and fiddle with the engine."

"An improvising trio absent the traditional markers of a rhythm section (bass and/or drums), the musicians on HASTE explore longer forms with a balance of gestural, painterly swoops and pointillist detail. The trio works through three collective pieces totalling just shy of an hour. Weston is an incredibly resourceful keyboardist, but his penchant for poise and deep listening ensure that his glisses and clusters remain on axis. It’s important to note that both Weston and Laubrock are accomplished composers and, while the music on HASTE may be collectively improvised, it’s clearly from a perspective of naturally unfolding structure and organisation (Marshall acquits herself excellently in this department as well). Therefore, as the trio moves through these tri-logues and conversations, it’s with an ear towards engagement, dynamics and resolution.

Sleeping Down Hill comprises the disc’s first half, beginning with subtonal reed kisses and ponticello bowing against hushed, rhapsodic chords. Gradually the three layer and spread out, becoming unruly and dense in the process – Laubrock’s tenor alternately pillowy and harried in a controlled gush against the pricks and dives of Marshall’s cello. Leaving Up finds the saxophonist switching to soprano at the outset, twirling and fluttering as part of a delicate three-pronged counterpoint, the trio moving between skitters and telepathic elision with seemingly sharp left-turns often hinging on bow and strings. While not quite as theatrical as Tristan Honsinger, Marshall’s cello work is similarly mealy and dervish-like, extending modern classicism into an electrifying, madcap whorl. But at the same time, her sense of control within/of the classical tradition garners more than a few nods in the direction of János Starker. HASTE is a gorgeously recorded and far-ranging slab of contemporary creative music, and a fascinating entry in each of these three musicians’ output. "

"'Haste' perhaps 'makes waste', but that is hardly the case here, as these well-versed and frequent collaborators display prodigious talent with reserve and consideration for group interaction. The culmination of their virtuosic playing, particularly with two instruments more often associated with compositional music, takes free improvisation into areas of profound melodic and rhythmic interaction with a lack of urgency. In Haste, the younger players complement perfectly the older garde, or perhaps vice-versa — this is fully modern improvisation, authoritative and determined, graceful and informative, confident and convincing.

The three recordings on this release were beautifully recorded live in Barcelona at the XV Festival Internacional de Improvisacion in February, 2011. Sleeping Down Hill starts introspectively, a dreaming discourse that slowly builds in intensity, until Laubrock's cries, Marshall's sawing and Weston's clusters accumulate as though the listener had rolled near the end of the hill and awoke to find themselves teetering in a precarious position. The sleeper is extricated with a pensive decline, as though the listener again descends into crepuscular reveries as they reach the bottom of the hill. Leaning Up finds Laubrock on soprano sax, a sprightly tone that darts around Marshall's ruminations and Weston's playful forays; the 23 minute improvisation inclines in diverse directions that is monumental in its cohesiveness and conviction. Courtesy of None is the briefest and most succinct of the three pieces, shorter than 6 minutes but taking the listener on a complex journey from opening intricate interactions to an elegant departure. Their trio work feels masterful, with no hesitation or moments of uncertainty. All three players are charged, resolute, and bring a wealth of ideas and skill to the music, with the result a resoundingly superb album."

"The journey they have in store for us is called HASTE, yet it starts with the kind of pace as if they have all time in the world to move forward, and that's a good thing. Notes are stretched around a tonal centre, with the three musicians circling around with full intensity, alternating subtle low volume moments with harsher bouts of dense interaction. The overall effect is eery, presenting a sonic universe full of surprises and possibilities, of sensitive enthusiasm and hesitating joy, and at times of sad acceptance or paralysing terror. Possibly one of the most discerning aspects of the music is its restraint, the cautious control over sound, creating rather minimalist moments of few notes, yet with full dramatic effect.

It is hard to follow what is taking place conceptually, yet the listening experience is a great one, with all three musicians playing better and more aligned than in many of their recent albums. Weston is of course a mainstay of British improvised music, but the way he challenges - and is challenged by - these two young musicians is fantastic. Both Marshall and Laubrock have been in great demand for collaboration lately and we can only hope to hear even more of them. Beautiful, challenging and rewarding music."