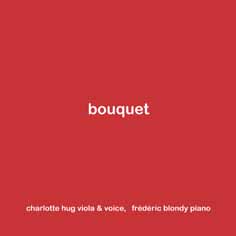 Swiss violist Charlotte Hug and French pianist Frédéric Blondy, being acutely aware of the history and repertoire – both composed and improvised – of their respective instruments, well understand that once one goes beyond the traditional boundaries of 'normal' technique, the question of compatibility is of little or no importance. There are moments on BOUQUET where I really don’t know who’s doing what, and it hardly matters. From a purely technical standpoint, the instrumental innovations are numerous – from the steely drones Blondy summons forth from his piano by bowing its strings and the eerie glissandi he produces with rosined chopsticks to Hug’s 'soft bow' technique, which allows her to play all four strings of her viola simultaneously – but what impresses most about these twelve pieces is their sheer musicality: how the sounds are produced, intriguing though that may be, is of far less importance than what they do and how they’re combined to produce music of formal rigour and extraordinary emotional power.

Half a dozen clicks on a mouse will summon up all the biographical information you’re ever likely to need on our protagonists, not to mention several splendid videos of them in action, but it’s worth pointing out that as performers and teachers they both have wide experience of contemporary classical music (an odd appellation contrôlée, that, as the music in question neither corresponds to the definition of 'classical' as proposed by Charles Rosen in The Classical Style, nor is hardly 'contemporary' anymore, since a lot of the stuff I see in contemporary classical bins was written over half a century ago). I haven’t had the pleasure of perusing Charlotte’s record collection, but I can tell you that there’s as much Lachenmann and Ligeti in Fred’s as there is free jazz, and I suspect BOUQUET is more likely to appeal to connoisseurs of Grisey, Xenakis, Cage and Feldman than to listeners weaned on Coltrane, Sanders and Ayler.

So the line 'all music composed and performed by' (my italics) is significant in my mind, especially since in recent years I’ve had to revise my own preconceptions about what does or does not constitute composition. I used to think there had to be something on paper, but I’m not so sure any more. Even assuming you could transcribe this music accurately and end up with a more or less traditionally notated score, any detailed analysis you then went on to make using standard new music set-theory tools would only end up telling you what you can already hear: that this is top-notch music made by two outstanding performers with exceptional ears for pitch, rhythm, timbre and structure at the micro and macro level.

"A very fine collaboration between this Swiss violist and this French pianist, recorded in two days of studio work back in 2008. Why is this just coming out over four years after the fact, I don't know, but it deserved to come out. Twelve free improvisations that highlight - once again - all of Hug's sensitivity and originality."

"A single sizzling viola note followed by a peremptory piano chord opens up the vibrant, imaginative duo session for Charlotte Hug and Fréderic Blondy. Two of the more committed prepared instrumentalists out there, these players avoid the tricks-for-tricks-sake approach to improvisation and instead put their languages in the service of carefully considered distillations of the unknown. Among the main ingredients are tiny scrapes, low dampened chords, sustained intonations, and groaning wood, which together make for a myriad of sonic combinations across these pieces from 2008. But what really makes it is the combination of this vast textural and dynamic range with an often fascinating rhythmic language. It’s there from the start of La Belle Sultane, with Hug’s mewling, distorted strings against brilliantine plinks and an innenklavier thrum, all coalescing in the sound of big clouds blooming. Or, listen to the skittering mice inside the wall on Oeillet Parfait or the gloriously contrapuntal Cato’s Pink Cluster, which winds up into a furious cascade of notes. And the pair is smart and inquisitive enough to couple these denser pieces with several that go deep into the grain of various drones. Sombreuilcombines a resonant low end from Blondy (presumably using Ebows) with Hug’s keening high-end micro-squeaks. The pianist has such fabulous range, by the way, and can sound like bowed metal, or a series of gongs and woodblocks at times. Nova Zambala and Thalia Remontant at times suggest viola plus John Tilbury, but there are also those distinctive percussive thickets that transform the laminal textures, heating them up briefly and letting them cool back down into the sound of bells, whorls, and the most warm wood. It’s a vibrant set of scraping symphonies and spectral worlds, all arriving at the closing rumble of Thor. But a special word for Rosa Moyesii, which opens with limpid single notes against a grainy drone before plunging ever deeper into an icy grotto, in which Hug tastefully uses vocals: the deepest of sighs and the 'aaah' of discovery, as whorls of overtones gather around these splendid, splendid players."