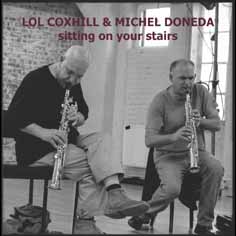 SITTING ON YOUR STAIRS

Coxhill and Doneda had met at various Chantenay-Villedieu festivals (then the private kingdom of the nato company). They played a duet in London in 2008 and met again in 2011 in London, in Toulouse and on February 3, on the stage of Les Instants Chavirés in Montreuil (a suburb of Paris). Coxhill also performed there the day before with John Edwards and Steve Noble.

Lol's great singularity is that he crossed genres while maintaining his unique sound. He was an outstanding and uncompromising improviser who was not against looking for tricky situations, skimming abysses and margins, venturing beyond habits and comfort. His debut album EAR OF BEHOLDER (Dandelion), published in 1971, would more or less constitute the modus operandi of his musical career: playing solos (recorded at home, on a bridge, at Piccadilly, at the zoo, etc.), reinterpretations of Lover Man and I am the Walrus, collective improvisations, sweet duets, etc. As for the self-taught Michel Doneda, who plays only the soprano saxophone – he has been involved totally and completely in free improvisation. 'I'm basically an improviser' he says. I'm basically involved with sound. More than playing a style of music, I improvise'.

The music here is presented complete in the order of performance. Right away we feel that the two musicians wanted to give themselves space enough to let their conversation flourish in a musical area which is often soft and uncluttered – to successfully find a cohesive light without ever abandoning their own prerogatives and sensibilities. By no means is it about one playing against the other – they are light years away from historic free jazz invented in the sixties. Lol’s solo leads onto a melodic and rhythmic ostinato inciting Michel to enter through a criss-cross of bright, fresh lines. clear as crystal. In the maze of tones and colours that illuminate the music of this CD, we easily recognise the Briton through his sinuous phrasing, his micro-tonal inflections, his bitter-sweet lyricism and his particular manner of releasing small, elastic melodic structures within his tonal distortions. Down to the smallest detail, Lol Coxhill’s inventiveness and expressiveness are here at their peak. Doneda has a more organic approach to the instrument – he’s not phrasing but scratching inside his pipe, bringing out a jungle of micro-sounds, puffs and murmurs, growls and other unconventional effects. Although often graceful and delicate, their conversation can also be as keen and sharp as steel. Two musicians at the top of their art.

"During 2011, in the last months before he was incapacitated by the debilitating illness that eventually killed him, soprano saxophonist Lol Coxhill was making some of the best music of his life. This duo recording from April of that year, sees him matched perfectly with fellow soprano player Michel Doneda to create four beautifully lyrical duets and a solo apiece. While everything on the disc could stand as a masterclass on how this instantly recognisable instrument can be put to use, it's the duets that really catch the ear hear. The pair give the music space and avoid the dangers of playing too much all at once. The music feels clean and clear, with Coxhill at his most gorgeously simple and Doneda finding the right balance. Warm, gentle, superbly crafted and beautifully subtle, this release stands as a great farewell to a fantastic musician, and underlines Doneda's position as one of the best we still have."