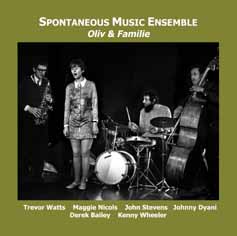 The 1969 OLIV session was the third Spontaneous Music Ensemble (SME) LP to be issued, following on from CHALLENGE (1966), now available on 5029, and KARYOBIN (1968), currently awaiting reissue. Other early SME recordings were subsequently issued on the Emanem CDs called WITHDRAWAL (awaiting reissue), SUMMER 1967 (4005) and FRAMEWORKS (4134). OLIV & FAMILIE also contains a previously unissued recording from around the same time as KARYOBIN.

FAMILIE appears to be the earliest recorded example of a large SME group. This music is very influenced by slow-moving Gagaku (Japanese court music), especially the semi-composed first half. The second half is largely a free improvisation with a brief return to the written material at the end. An alternative take was recorded, presumably shortly before the selected take. The first half of this other take was not well realised, so only the mostly improvised second half has been added to this collection. Another version recorded a few months later by a very different quintet can be heard on FRAMEWORKS.

When a recording opportunity arose around this time, John Stevens was inclined to put together a special group, rather than just use the current working version of the Spontaneous Music Ensemble. Thus the OLIV I line-up was put together just to record two of his pieces in the studio, only one of which ended up on the original LP. All of the performers were given particular roles. Kenny Wheeler’s was to act rather like a jazz soloist, while Derek Bailey was free to comment throughout. The saxophone and three vocalists functioned as a drone, and the piano, bass and drums acted as a jazz rhythm section. (Note that Carolann Nicholls reappeared decades later on record as Carolann Jackson.)

OLIV I begins with a statement of the theme written by John Stevens with words by Maggie Nicols. This leads into a particularly beautiful section in which Wheeler and Bailey improvise over just the drone. Then the static drone is joined by the forward-driving rhythm section, to produce a push-pull backdrop that is inherently contradictory and full of tension. After listening to this for over 40 years, I’m still not convinced it makes sense, but it does result in some superlative playing from both of the soloists, before finishing in a somewhat extended coda.

A second piece by this nine-piece group did not result in a satisfactory performance, so it was decided on the spot to record a another performance utilising the same starting material with just the then current SME quartet – John Stevens, Trevor Watts, Maggie Nicols and Johnny Dyani. The result, OLIV II, is one of the classic recorded performances of that era or any other.

OLIV II, which became the second side of the LP, also begins with the theme statement, but then goes into a very fine quartet improvisation in which all four musicians have equal roles, without any of the hierarchical functions associated with jazz. Stevens uses his small SME drum kit, which was designed to have the same volume level as other unamplified instruments. Unusually for this type of music, Watts plays alto saxophone rather than soprano. He also holds back a bit more than normal so as not to overwhelm the new singer, Nicols, who recently said: "It was indeed my very first recording and I was so scared of doing bebop licks, that I didn’t use any consonants at all!" Dyani shows himself to be a very adaptable bass player who often found unique ways to fit in without being at all disruptive. The performance ends with two basic Stevens concepts, namely a Sustained Piece and a Click Piece.

On gigs, this group was sometimes augmented by either Carolann Nicholls or Kenny Wheeler to become a quintet. The former was on board when the SME played a Berlin festival late in 1968 – a performance that flummoxed and perturbed the brute-force improvisers who were then prevalent there. Later in 1969, Maggie Nicols was replaced by Mongezi Feza resulting in a quartet that does not seem to have been recorded. We must be thankful that OLIV II was recorded even though it was almost by accident.

"Got Oliv on the headphones now at work - great job on remastering this beauty. I have a nice Polydor LP but this certainly blows that away. And the Familie sequence sounds very clear too."