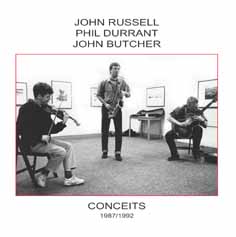 Phil Durrant and I originally played in a trio with soprano saxophonist Mark Pickworth at my flat in Finsbury Park. The idea was to play on a regular basis with the same people and to see a ‘group language’ develop. After a couple of years Phil and I wanted the group to play publicly, make recordings and tour but Mark wasn’t so interested as he enjoyed the more informal aspects of our earlier sessions and had other priorities. By 1984 Phil and I had decided to find other musicians who would like to take things further and one of the first we considered was John Butcher who had ‘come on the scene’, or at least to our notice, about a year earlier playing with Chris Burn. Originally we hadn’t intended to replace a saxophone with a saxophone, or even continue as a trio, but after John accepted our invite it became obvious very quickly that we should stick with both John and the trio format. He was already working on combining the timbral and melodic aspects of the saxophone to a high degree and this fitted in so well with what Phil and I were doing. We then continued to play at my flat but also got as much public playing experience as possible.

It's a sign of how times have changed in the last quarter of a century that I first heard the Russell, Durrant, Butcher trio through a weekly 'Jazz Today' session hosted, in 1987, by Charles Fox on BBC Radio 3 and a small review by Mark Sinker in the rock music weekly the NME. Liking the sound of the music I sent a cheque to John Russell's address as mentioned in the review and received a vinyl LP called CONCEITS. At the time I was just out of my teens and living in the north east of England. Getting the record through the post gave me a feeling of direct connection with the far off London scene. At the time I particularly responded to John's sound, recognising the influence of Derek Bailey, whose music I had recently discovered via the bargain bins of local record shops. Phil Durrant I had heard at a festival of electro-acoustic music in Newcastle and had shortly afterwards bumped into him at my first Company week on a rare trip down to the capital. In hindsight it was the contribution of John Butcher that my ears had initially undervalued, not realising the extraordinarily original approach to his somewhat hackneyed instruments of choice.

It would be another 6 years before I would move to London and I feel privileged to have heard the trio several times, usually at the late lamented Red Rose club. The strength and delicacy of the group were ever present with a genuine group empathy, often sounding like three aspects of a single mind, a perfect example of Fred Frith's idea of 'virtuosic listening' as well as technique. CONCEITS, with its 78 rpm track lengths strikes me now as a formative document for a style of improvised music that shunned the free-jazz of Brotzmann / Benninkesque blowouts for a more measured, though no less passionate approach.

To my mind the free improvisation community has kept much of the originality and vitality of the music alive in the face of the vagaries of fashion and economic variables. The word 'conceit' in its varied definitions seems just about right.

I think the trio is my favourite musical format. Not as easy to follow as a duologue or a monologue and not as potentially crowded as a quartet or larger. The thing that makes the Russell Durrant Butcher trio so special is that there is no immediate focal point - no soloist with accompanists, like in a piano trio – just three acoustic instrumentalists with extraordinarily individual sounds.

It's not for nothing that John Russell's guitar is described as an 'acoustic plectrum guitar' on the sleeve of CONCEITS – the plectrum (a big chunky one if I recall correctly) is a big part of the noise he creates – whether rubbing roughly over the strings to produce tiny pings and friction sounds, or as a flinty slamming as he hits the strings with a violence rarely heard in acoustic music. The little runs and sudden thinly chiming chords seem to rise out of a bed of constant skittering percussive work.

John Butcher's saxophone work has become as familiar as it is unique – but what is perhaps surprising about these recordings, listening again after 28 years, is how much of his vocabulary was already there – the split tones, the high fluting notes, the bell-reverberating honks and flutter-tongued splutterings. I'm struck again by the fluency of his playing – the darting and weaving around the textures of the other two.

If anything, it's Phil Durrant's contribution to the trio which is the most mysterious - hearing the trombone playing again is startling (it's an instrument he dropped from live playing not long after this record) – adding rough and throaty declarations into the mix. I don't know whether I'd go so far as to say that I miss the trombone from the more recent recordings, but it's certainly his work on the violin that I find fascinating – not least for it's ability to hide and become blurred amongst the action of the other two – often holding whispering notes or tiny gestural sounds - I find it hard to completely focus on what he's up to – and yet you're aware that the structures, understated as they often are, are incomplete without his often unassuming contributions – and it's perhaps of no surprise that Durrant went on to be an important part of the “reductionist” movement – the clues are there.

It was quite a few years after purchasing CONCEITS in the late 80s that I actually saw the trio play live – although I'd seen all three play on separate occasions. I think it's worth mentioning that they did seem markedly different to the other improvising groups around at the time, not just because of the extraordinary music they were making, but also because of the way they looked – Russell, rather debonair, in clothes that seemed older than his years, hunched over his ancient-looking acoustic, sleeves rolled up ready for action, Butcher, immobile in marked contrast to the fiery free-jazz players throwing their instruments about as they play, would stand with a ramrod-straight back and staring into the audience, while Durrant would seem lost in concentration, spending a lot of time listening and grimacing slightly when playing long notes, as if concerned he might be adding too much. They were utterly compelling, and as players they remain so.

"CONCEITS reissues the first recording of the long-standing trio of Russell, Butcher and violinist (and then trombonist) Phil Durrant. The 1987 recording still has the force of revelation - from the low volume of its purely acoustic instruments and the novelty of its timbres to its concentrated musical thought, each instant alive with detail, whether from a single instrument or three, each focussed on the potential for detail and its possibilities for resonance and meaning. The original LP's 11 tracks are relatively brief, from 1:52 to 6:09, but each has its own identity, its own 'beginning again' in the development of a collective language. At times it feels like a zoo on another planet, various species chattering their way to a common tongue, testing every resource - harmonics, multiphonics, scratching, tapping, squeaking, bleating, even coherent melody - in the process. The original studio recording is complemented by 'Soft Hours and Solidities', a 16-minute portion of a 1992 concert in Sweden. It's a masterpiece of controlled and sustained improvisation, subtly developing and expanding from initial overlapping flurries to extended passages of ethereal, whistling harmonics."

"CONCEITS moves with a sense of purpose and direction, even if the map Butcher, Durrant and Russell work from has as many whorls and curlicues as a human fingerprint.

It's still full of vitality, zest, wit and intelligence. There's a strong sense of intense real-time listening and analysis on the part of the players; and along with the concord there is also discord: the reeds, string and brass either emulate or starkly caricature each other. The ultimate goal, though, is the pursuit of an acoustic commonality, synthesis.

In terms of dynamics the trio sometimes show great restraint, at others they're relentlessly wild. The music across the 11 pieces of the original album is suggestive of organic forms; as cold and barbed as a thorn bush dusted in frost, or evocative of the gentility, fecundity and warmth of sitting in a meadow in summertime. There's superb interplay between the instruments, with Durrant alternating between esophageal speech on trombone and material physics tests for violin, generating sounds that resemble vocalisations of foxes or light joinery. Butcher is either wonderfully ornamental and lyrical, or hard and punctuative. Russell is a perfect foil for both players, emulating, mocking, shadowing, ducking or contradicting each statement and gesture.

These 11 pieces are appended by Soft Hours And Solidities, a live recording captured by Mats Gustafsson in Stockholm in 1992. It makes for a ponderous and introspective coda. But CONCEITS itself is more than just a significant work in the canon of free improvising; it's a marvellous document of what humans are capable of when they work collectively."