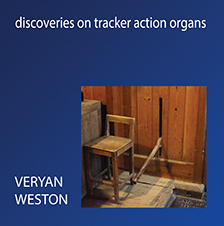 Church spaces are known to be great for singing in because of the hard stone reflective surfaces. That very 'live' natural reverb helps imbue the place with a religious vibe. Likewise the big Baroque church organ can add a good squelch to any religious event. But alongside this more pious extreme are sometimes found smaller organs which function to discreetly and modestly provide support for smaller or intimate religious settings.

The earliest organs were completely mechanical and are referred to as 'tracker action organs' and have a direct physical relationship between the instrument and the player. Small tracker action organs are responsive in that there is a only a short gap between the touch of a key and the pipe making a sound. The only change these instruments have undergone has been the replacement of a manual pump for the bellows, as seen on the cover, to an electrical generator to supply air to the bellows for the pipes.

Also unique to tracker action organs is that when each stop is very gradually pulled out (or pushed back in) while a key is pressed, you can hear many stages of the sound being made; from breath to whisper, from whisper to a glimmer of a pitch and then sometimes various harmonics. Often microtones seem to bend towards the final pitch, all of which happen in a pleasantly unpredictable way before the stop is fully pulled out to play the note it is supposed to play.

The seven recordings on this CD were part of some preparatory research for a project supported by Sound & Music. It involved string players Jon Rose and Hannah Marshall and was called the TUNING OUT TOUR. This tour was described as “exploring new territories in tuning using tracker action pipe organs and re-tuned string instruments”.

Initially though, the preparatory research required finding suitable and relevant spaces and instruments for the tour. This was done online using sources like The National Pipe Organ Register. After locating and arranging meetings, I then visited about 30 organs in England. All these 'trials' were recorded and it is a selection of these recordings that has been chosen by Martin Davidson. There is a double CD release of the TUNING OUT TOUR on EMANEM 5207.

A lot of the recordings consists of 'trying out' ideas and exploring what each organ could do, so for this reason the word 'discoveries' is used in the title of this release. On occasions, there was not much time to do very much exploring, with a caretaker or vicar listening with puzzlement and hovering about in order to close up the church, but there were a few exceptions (notably York).