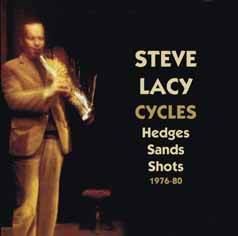 STEVE LACY soprano saxophone
with Pierre Droulers dancer B6 - B10

The eight pieces that comprise Steve Lacy's SHOTS cycle were composed from 1972 to 1974. They appear to have coalesced into a cycle around 1976 – I can remember Lacy performing this sequence at his second solo concert in New York City around 1977. However, this cycle didn't stay in his active repertoire for long, although Moms, Pops, The Kiss and The Wire were heard in stand-alone situations earlier and later, unlike the other four pieces which seem to have vanished from sight.

The whole cycle was performed solo, and nearly all of it recorded, in Paris late 1976. Further listening revealed that a version made in Roma a year later is much more lively, so I opted to use that. However, there are two major problems with this Roman concert recording. One is that it was recorded on a cassette recorder with Automatic Gain Control, resulting in me having to spend many hours reducing the volume of each pause and its ensuing note to overcome the undesirable effect. The other problem was that Tots and The Wire were not on the tape – they presumably were performed, but fell off the end of the cassette sides. So I used The Wire from the earlier Paris concert, and took a superlative Tots from a Köln concert, that also produced the version of Snips used on AVIGNON AND AFTER – Volume 2 (Emanem 5031).

1974 performances of Moms and Pops were included in the aforementioned solo CD, where it was pointed out that these two portraits were of the parents of both Irene Aebi and Lacy. The Kiss, dedicated to Maurice Ravel, was built around a little poem (not heard here) found in a very strange garden near where I lived in south-east London. This version of Tots is an extraordinarily well developed performance of the piece dedicated to Claude Debussy.

The Ladder is a self-explanatory composition dedicated to Joan Miro, that demonstrates Lacy's soprano saxophone range. Fruits, dedicated to Edgard Varese, is a major performance covering a considerable territory, whilst Coots explores various extended techniques, and ends up being somewhat humorous as does some of the the music of Charles Ives. A metronome is used to accompany The Wire which is for Albert Ayler. This mainly explores the upper registers.

The cycle was also recorded 1977 October 15 in a Paris studio, by Lacy with a traditional Japanese percussionist, Masa Kwate. Since the latter was not at all familiar with the music, his improvised contribution was somewhat random, but very sensitive (and rather nice). This was released on an LP called SHOTS (Musica 3024) which is long out of print having never made it to CD. So this new release makes a fine and very varied sequence available again, in what is generally a better version.

Porrentruy is a small town west of Basel on the Swiss side of the border with France. The idea of recording in the acoustically magnificent church there was to produce enough solo material for a two-LP set. The afternoon session, without an audience, was used to record four individual pieces, and the three-part SANDS cycle. The evening was replete with an audience, who witnessed HEDGES performed as a duo with the dancer Pierre Droulers, and another version of SANDS.

Lacy preferred the afternoon version of SANDS which is what is heard here. Shortly after the session, it was decided to issue a two-LP set called BALLETS made up of HEDGES and a sextet version of 4 EDGES, meaning that none of the other solo material has been released until now.

Personally, I think the four stand-alone pieces are all worthy of issuing, especially as there are no other recorded versions of the introverted Thought and the magnificent Swoops which is dedicated to the leading jazz bass player, Oscar Pettiford.

Prior to this CYCLES release, the only published solo version of SANDS was that recorded in 1998. This 1980 version, performed soon after the music was composed, is similar to the 1998 one, but I find it rather more satisfying and stimulating. The suite is based on the words of three of Samuel Beckett's French poems which are not heard here. (A 1983 sextet studio recording with the words remains unissued.) Given the beliefs of both Beckett and Lacy, this is surely radical secular culture.

Solo playing is very often a way for me to begin the realisation of certain compositions which are too new and difficult to perform as written, until they "age" a while and eventually become playable. "The best tunes are old tunes".

The 5 pieces, called HEDGES were written as duos for sax and piano, but in this version, as a ballet, my partner was the dancer Pierre Droulers.

Squirrel, Fox, Rabbit, are animals which come out of Hedges, and wind up in Shambles, as do we all!

Both the music and the dance were a mixture of practised compositions and prepared improvisation. Of course good complicity with a knowing public is a major factor in an event like this. The idea of "hedging", as in business and gambling, is also present in this work, as well as some of the characteristics of these particular creatures such as economy, cunning, brio, etc.

HEDGES is presented here exactly as performed that evening in Porrentruy, with the dancer's footsteps, audience murmurs, coughing. Everything. However a strictly danced, unaccompanied section of about 3 minutes was removed from the record.

"This fabulous, historical double discs featured mostly unreleased solo recordings from the late Steve Lacy. This two disc set is long, nearly 2 & 1/2 hours in length. After listening to it all the way through a couple of times, I am astonished at how much great music is found here. Each cycle or suite is like a story or set of stories unfolding righteously, expressively and with poise and craft. For me, this is not difficult music but more wide ranging than one would imagine. Many thanks to Martin Davidson at Emanem for leaving us with this treasure chest of shiny gems. "