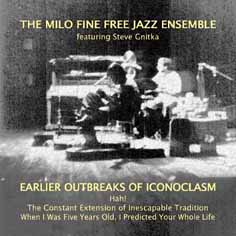 It's a challenge to even try to put your music into words. You put yourselves into your music, there's no holding back; you wrap yourselves up in it and leave it up to the listener to find out what's inside. There's some intellectual stimulation, some cerebral pleasure in it, yet something visceral at times, too. I think I approach it on two levels, primarily: pure sound, and then in some dramatic or psychological contexts of my own device. I'm not sure which predominates. You ask as much from the listener as you give, and some people don't want to give in return, or can't.

Your humor, yours and Steve's, is sly. It's there, but it's around a wall or in a niche. It's in the clarinet especially, I think. You mentioned sick, ironic tunes and I suddenly heard you playing a sleazy strip show number and bursting into your own in the middle of it and upsetting the whole bump and grind program, rerouting it. This little audio-fantasy amused me. There are also moments when you, Milo, seem totally possessed. It's exciting, and a bit frightening; contained, controlled excitement, Steve is more passively possessed, if that makes sense. Your music is you, or you are it. It's an expression of you, the music, a whole chunk of your character and mood that I know. It's nice to see that in someone who creates. It's a privilege, really. Steve, too, although he's the quote 'quieter' one. I know how that is, one person is more 'dominant', which says not a lot about the real give-and-take. I'm sure that Steve’s personality and creativity are just as strong as yours. That's obvious when you two play together. It's always complementary, never competitive. By the way, there was a fairly long, hot and heavy piece where Steve was plucking on some bass string and you were going wild on the drums. I really got into that.

There's something you did with the cut cymbal that drove me up the wall. You were moving it, playing it with your hand, and it made some tight, continual vibration that's the nearest I've heard to a feeling I get, usually in my limbs, where I just wanna break them or rotate them or do something to rid the tension in the marrow. Loved it. There are isolated moments like that that I can fix on. Steve did some incredible spinal-tapping things. You guys pull sounds out of the instruments I didn't even know were there. At some point, the guitar sounded like a violin. I swear. Then there was one part where you were in the upper keys, Milo, and the two of you made the sound of a million pennies falling on the pavement (sensuous metal?). And Steve did something acoustic I identified with without knowing what it was. Sometimes when I listened I felt like a child who's been brought to the edge of the universe, to a view of a warped, infinite horizon. I'm not saying your music is warped. What I'm saying is, uh, it's not the straight and narrow, but… it keeps… keeps going forward. Usually less is best, so forgive me for running on.

If nothing else this reissue and issue of material from their early days shows that Fine and Gnitka were excellent and imaginative improvising musicians (and I hasten to add that later recordings point to them still being so). So apart from these early releases on a fledgling European label about to make its mark, why did their careers not take off? Fine suggests it was essentially an issue of blacklisting, having in part to do with his refusal to dance to the unreasonable tunes of arts bureaucrats and don the mantle of the 'careerist'. The primary reason, however, was the result of his unwillingness to tow the 'party line(s)' of those, as he puts it, at the upper end of the food chain, as concerns his former ancillary work as a reviewer. But, I imagine that it must also be due to their decision to stay in their home town rather than move to one of the fashionable centres of the musical world. So forget about where these two musicians are geographically, and listen with your eyes closed, but ears and brain open, for a very pleasant surprise.

There is nothing that really needs to be said about this music, except that it is very accomplished and quite varied (most blatantly because Fine plays three very disparate instruments).