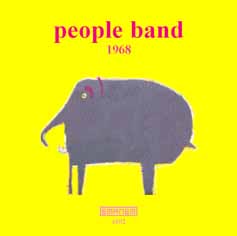 The People Band (originally known as the Continuous Music Ensemble) was founded around the same time as AMM and the Spontaneous Music Ensemble. However, unlike those other two pioneering groups, it did not develop its own distinctive methodology and language. Its approach was more laissez faire - anything goes. So the music on this 1968 recording covers a wide spectrum, both looking back to free jazz and chamber music and forward to free improvisation and conductions.

To quote the notes on the original LP: "The music is free, but it is not really free jazz: the music supersedes all boundaries and limitations, and becomes a spiritual experience. This is a music whose very essence is communication, and one finds it very difficult to conceive of any art form which could be more total than this. But let us not get bogged down with philosophy; it's not philosophy that matters - just the sound - and this is a beautiful album."

In general the People Band considered that the word 'spontaneous' meant 'spontaneous', i.e., without boundaries, methodology or pre-imposed structure - a music that was 'arrived at' without spoken pre-conditions or methods. The People Band were, in fact, as a whole 'anarchic' towards any individual who did want to structure the proceedings. The conductions and various scores were only briefly entertained.

Around 1960, Russell Hardy, Terry Holman and Terry Day formed a trio (later sometimes augmented by Henry Lowther). This group was probably the first in London to perform free improvisation exclusively. It was also probably the first in which the drummer (Terry Day) reduced his volume using a small kit played with reduced sticks and knitting needles, in order not to drown out the generally quiet pianist.

The Russell Hardy Trio (as it was generally known) met up with the other musicians around 1965 when performing at the Starting Gate pub in north London. The merger of these two groups became the Continuous Music Ensemble whose founder members included the ten musicians on this recording.

The People Band collaborated with the People Show - painters, poets, dancers, mime artists, eventists and installationists. The basis of the music was primarily improvisation, and the concept of music being continuous without beginning or end - one merely plugged into it.

"Up until Julian Cowley's gripping expose in The Wire 220, The People Band were lost to the times. Their project of total musical freedom, of blurring the boundaries between audience and performer was apparently so effective that they had managed to duck conventional musical histories altogether.

But The People Band existed in a constant state of flux. The People Band's roots were similar to contemporary groups like AMM and The Spontaneous Music Ensemble. But their allegiance to jazz, or any formal working strategy, was brief. Eventually, they settled on an approach to improvisation that was all about expansion and never looking back, the only referents the pulse of blood and the movement of hands.

Much of the improvising takes its lead from stumpy percussive patterns that imply sub-Saharan rhythms, an approach that's closer to the communal music of The Sun Ra Arkestra or The No-Neck Blues Band than any continental collective. There's little use of heads or even repeating figures, except for the odd guitar phrase or bowed bass chord. It's only during the series of Conductions that the group falter, falling back on the safety net of earlier working practices under the pressure of studio time. Here their organisational model is obviously John Coltrane's ASCENSION, with a huge group exclamation followed by a descent into individual chatter.

In the sleeve notes, Terry Day describes the recording as being unrepresentative of the live People Band programme, claiming it wasn't as 'raw, free, anarchic, and chaotic as a gig'. At their peak their live shows were anarchic multimedia actions, with interventions by performing arts troupe The People Show and audience members regularly swapping roles with the players onstage. None of that atmosphere is really apparent here, and at points the presence of four studio walls is palpable. Still, in the absence of much in the way of documentation, this is a vital snapshot of a group that operated on the outermost ring of the music industry on its one and only entry into orbit. Despite the clandestine nature of their mission they set charges that are still sending out aftershocks, with British groups like The A-Band and Vibracathedral Orchestra working the same back roads, digging away at the consensus and forwarding the idea of art as a liberating, communal and non-specialist pursuit."

"This CD reissues all of the People Band's sole album and adds 15 minutes of additional material from the same recording session. Some tracks still have light surface noise and pops in them, others show some distortion (probably already on the master tapes), while a handful are pretty clean. But sound quality has little relevance when it comes to albums of such historical importance. A contemporary of the Spontaneous Music Ensemble and AMM, the People Band was much more unruly than its fellow improvising ensembles. And while SME still had some kind of ties to jazz at the time and AMM was flirting with the psychedelic scene, People Band's anarchic nature stem straight from the happening culture. And despite Terry Day's comment in 2002 to the effect that this album is not representative. one can only imagine what the real thing could have been like. Because 1968 doesn't sound organised, restricted or structured at all. The 10 participating musicians are constantly tugging the music in different directions, swapping instruments, jumping in and out of the wagon. The music takes the form of four to eight minute edits (with three one-minute conducted improvisations thrown in). George Khan's bellowing tenor sax, Mel Davis and Russell Hardy's mad piano runs, the brass section shredding any attempt at a section effort, the dense barrages of percussion, the wild edits between and within tracks and the carnivalesque / transgressive spirit inhabiting the music all bring to mind the circus-like happenings of L'Infonie, much more than any AMM or SME performance. As a listener, you must relinquish all attempts to make logical sense of the proceedings and just dive in and appreciate the untamed energy and wild imagination of these young players, and the identity, slightly immaterial but definitely present, of the group emanating from these delightfully cacophonous pieces. Essential to anyone interested in the history of free improvisation."

"The People Band, unlike AMM and the SME, was a real group of musical anarchists. With no overriding ideology as such, and certainly no restrictions as to what could or could not be accepted regarding musical content (a lot of this is furious free form jamming, but there are several disarming major chords and even a few touches of tacky vibraphone chinoiserie), the resulting music is dense, chaotic and fun, if not always successful.

At its best, the variety of instrumentation and diversity of approaches to material is headscratchingly delightful. It's no surprise that the People Band formed strong links with the Dutch - the benign anarchy of parts of Skip to Part 3 is not far removed from the wackiness of the early ICP recordings by Mengelberg, Bennink and Breuker. Figgis, who of course went on to become a rather well known film director, is especially good at throwing spanners in the works. Unfortunately, the ending of this track is an example of how anything goes improv can all too easily slip into mannerist plonking and tribal jamming. Curiously enough, it sounds more like some of today's so-called post-rock.

By 1970 the good people of the People Band had more or less gone their separate ways; Day went on to explore the outer reaches of inspired crackpot improv with Alterations, while Hardy teamed up with Ian Dury in Kilburn and the Highroads. Holman is still playing 'with friends', including Hardy. Flowers joined the Hallé Orchestra in Manchester, Edwards worked with Big Chief, and Kahn with Mike Westbrook (for a while). Dobson eventually moved to Spain, Figgis to Hollywood, and Edem unfortunately disappeared without trace. Happily, the music they made back on October 1st 1968 didn't - and very enjoyable it is too."

"Formed around the same period that AMM and the Spontaneous Music Ensemble came together during the late 60s, People Band were another gathering of creative free spirits whose improvised music reflected the musical freedom of the time. Although they were less structured in their approach than their contemporaries, People Band's mixture of free jazz and chamber music eventually landed them with a recording contract. However, sales were low and the record company soon lost interest leaving the members of the band to go their own separate ways. The original pressing has since become quite rare, and so it is a cause for celebration that Martin Davidson's Emanem label has decided to reissue it on CD, complete with bonus tracks, historical notes by Terry Day and a child's drawing of an elephant on the cover as originally intended, an image which Transatlantic rejected and replaced with another elephant that the band all hated. All of which makes for a fascinating account that is more than backed up by the equally elephantine sound of People Band, a huge improvisational orchestra whose presence lumbers out of the speakers and fills the room with its unorthodox big band boom. The 11 tracks which make up this recording retain their powerful presence and playfulness, qualities that were perhaps too intimidating and perplexingly ahead of their time for many jazz (or rock) listeners to fully get to grips with in 1968. Over 30 years later and People Band's message to the people sounds just as revolutionary."

"The music is often visceral and exciting: Day's hailstorm knitting needles on skins, the mad scamper of Mel Davis' keyboard, and the free but lovely tone that Lyn Dobson turns up on the first track are all powerful forces. There are ties to styles: The strong sense of pulse on some tracks, mostly supplied by Frank Flowers' bass, with something of the effect of the polyrhythmic thrust found in the last music made by Coltrane's classic quartet. Also, George Khan's tenor work creates ties to free jazz, and the drums and piano do as well, though more by habitual association than anything else. These features are interwoven into primal music making though, different from that of contemporaries AMM. This is less thought-through - more haphazard perhaps - freewheeling, unrestricted."

"On this outing, you'll hear mellow sax parts, evolving into counterbalancing, free-form fests with accenting percussion, bowed bass, abstract African rhythms, conductions and more. A good portion of these works sound amazingly fresh or perhaps consistent with modern day, avant-garde type applications. Some of these pieces surge forward amid imagery of a dynamically viewed graph, marked with spikes, and wavering periods of development. The musicians' display a restless spirit throughout this curiously interesting program."

"Improvisation can be poisoned by personal ego, reciprocal intolerance or because the single elements don't mesh well in the overall scheme of that situation. On the other hand, an improvising open structure like the People Band is astonishing in its good sounding, even after more than 35 years from when these rescued tapes were recorded; everything seems to fall right in its place and there's a sense of controlled freedom I wouldn't expect in such an 'anarchic' context. If anything, expect no whining or joking from a bunch of artists without a leader: instead, observe an interesting organism perspiring passion and conveying some magic that will have you gazing and looking back to a world where there was really space for everyone...and in that space, lots of fun and plenty of ideas sprang out the brains."