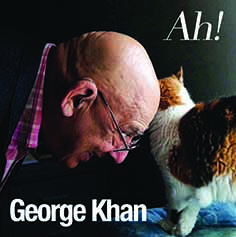 Analogue concert recording made in London (LMC)
circa 1980

Digital concert recording made in London (Red Rose)
circa 2005

George Khan could be called a forgotten pioneer of the London free music scenes, except that anyone who has heard or seen or met him could surely never forget him. As well as being a superb musician, he is also one of the nicest people you would ever want to know. He is one of the most laid-back characters. A memory I share with Steve Beresford is seeing him calmly leaning on some scenery at the Unity Theatre (possibly at the trio gig in this collection) outputting an apparently endless stream of what is generally called Fire Music, usually associated with great spirituality and body movement and often anger.

George Khan was born Nisar Ahmad Khan in London in 1938 to a Punjabi father and a mother of English, Italian and Swiss ancestry. The family emigrated to Pakistan in 1951 where George "met at school some Anglo-Indian friends who were into jazz and the popular music of the time. It was where I learned to play the alto but without any knowledge of harmony, and when I heard Charlie Parker I thought that he just did it. {How wrong I was}. Still, it was the most exciting sound I had ever heard. At the same time there was a lot of Bollywood music at home, also Kuwali that Dad loved. We had a piano which Mum could play by ear; she also picked up Indian songs phonetically and at times Dad would play the piano. which he had no idea how to, nevertheless he would just play. (That was my first exposure to free playing)."

However, "I could not wait to leave, so I returned to London in 1956 and for a while attended visual art schools@quot; (like certain other would-be musicians) " and after getting my diploma in art and design, I decided to concentrate on becoming a musician, a bit late in life. My wife and mother-in-law were a great help, enabling me to visit New York for four months where I took a few lessons with Booker Ervin. I don't think he thought much of my potential so I had more with Sam Rivers, which suited me better.@quot; He says the greatest influence from those days was Ornette Coleman on tenor.

Khan made his first appearance on record on the 1966 Peter Lemer LOCAL COLOUR on ESP. He also worked and recorded with various groups led by Mike Westbrook – a relationship that continued for about ten years. Other appearances were with Pete Brown’s Battered Ornaments and a fusion band called Mirage.

The meeting with Terry Day was of great importance for both of them. It came about because they both knew singer Ian Dury either directly or indirectly. "Terry invited me to the Starting Gate where I met Mel Davis and Mike Figgis, the start of a long and enjoyable experience." The Starting Gate was where the People Band was coming together. (The band was originally called the Continuous Music Ensemble, but decided to change its name when another group of musicians chose the rather similar name of Spontaneous Music Ensemble. Also, several members of the CME were already collaborating with the theatre group known as the People Show, so it seemed to make sense to call the musicians the People Band.)"

The People Band demised around 1972, but numerous deep relationships had been forged by then, so nearly all of the participants kept in contact, which resulted in the group being reborn some 30 years later using mostly personnel from the 1960s and 1970s. Khan spent much of his time in the People Show and became a permanent member in the 1970s. This enabled him not only to write and play music, but also to act and fulfil a childhood ambition to be a tailor.

The earliest (1968) gig on this CD comes from the original People Band period – all the participants apart from Peter Lemer were then members of the PB. (Albert Kovitz was a visitor from the USA; while Frank Flowers left the People Band shortly after this gig to join the Hallé Orchestra.) The music was offered as support to the students who had organised a sit-in at the Hornsey College of Art & Crafts against funding cuts. The quintet line-up was probably very ad-hoc, and the music did have some longueurs which have been edited out. But the remaining early examples of the playing of Khan and Terry Day help to fill a gap in their histories.

Every so often, members of the London improvisation scene who appreciated Khan’s talents coaxed him out into a concert situation, like those that make up the rest of this CD. The trio with Charlie Hart did a few gigs in the early 1970s, and this appears to be the only recording. It sounds as though the saxophonist wandered around a bit, but you will have to put up with that if you want to hear how they sounded way back then. This comes from the period when the Musicians Co-operative was presenting concerts on the one night of the week that the Unity Theatre was not otherwise being used.

The duo recalls the less than desirable sound of the London Musicians Collective space – a former railway store room without any of the basic facilities.

Finally there are two short solos from John Russell’s long-running Mopomoso series, which was then in the wonderful acoustics of the Red Rose (which has since been demolished much to the disgust of all music lovers).

Not a perfect collection by any means, but one which one hopes will draw some attention to the continuous brilliance of George Khan. Also to that of Terry Day, who had to drop out of the scene for medical reasons, but is now back playing just about all his instruments.

From October 1963 to July 1966 I was a Fine Art student at the Royal College of Art (RCA) Painting School. George Kahn’s wife Gudula was also a student at the RCA. In the first academic year at the RCA (October 1963 – July 1964) I saw George Khan a number of times at the RCA when he was visiting his wife. The Russell Hardy Trio had been checking out the jazz scene in London since 1960, so I knew who George was, but I never introduced myself to him.

At the end of the evening at the Starting Gate, individuals from the groups that had played there would come together in a last set. Over a period of time the same individuals would come together for the last set – thus the Continuous Music Ensemble (CME) was born – George & I becoming, along with others founder members of the CME. We both went on to become, with others, founder members of the People Band (PB). The CME & PB spawned various small trios one of which was the Nisar Ahmad Khan Trio featuring George on horns & flute, Terry Holman on bass, Terry Day drums & percussion.

It was with this trio that I first played at the Little Theatre Club. George organized for this trio to play there – this was prior to my working with the Second Generation there. I remember lugging three bass drums up the numerous flights of stairs plus all my other bits & pieces of drums and percussion. Two of the bass drums I played as normal. The third I used as a Tympani. I later abandoned a big kit for amongst other artistic & practical reasons – flights of stairs and the time it took to set up big kits – for a small kit of one swish cymbal and a tambourine as substitute snare drum.

The Nisar Ahmad Kahn trio covered a range of "improvised genres", from "straight down the line" to the experimental – it also explored the concept of "any sound can be used to make music". Dressed in his ‘finery’, I remember George blowing his soprano into the fire bucket which he had filled with water, and at times Terry Holman would run his electric shaver up & down the strings of the bass whilst his brightly coloured, illuminated bow tie, which he wore around his neck span round & round. As for myself, I swept the strings of the old upright piano with the house broom, & turned on the water taps in the kitchen………… gurgling bubbles, spinning fan, shaved bass strings, running water music…… accompanied by brushed strings.

"Listening to George is a trip down memory lane - some great music."

"In his notes for AH! Martin Davidson, who runs the excellent Emanem label, describes Nisar Ahmad 'George' Khan as 'a forgotten pioneer of the London free music scenes'. The welcome return in recent years of The People Band, in which Khan still plays a pivotal role, has restored some sense of his involvement with free improvisation. AH! dips into a wider pool of archival material and confirms that Khan is indeed, as Davidson asserts, a superb musician.

The fire and fluency of his playing are evident from the outset of a duet with drummer Terry Day, caught at the London Musicians Collective around 1980. Recording quality, as elsewhere in the collection, is compromised by the venue or circumstances, but the music is sensational in terms of intensity and also inventiveness. It's one thing to unleash a stream of raw energy, quite another to fill the air with pyrotechnic designs and brilliantly voiced flights of imagination.

There's no narrow imitation in Khan's playing and no formula. On flute as well as saxophones he articulates an inimitable and independent spirit, which Day matches with his own. They are heard together too in a quintet with Peter Lemer, recorded at the 1968 London Hornsey College sit-in, and in a mid-70s trio with bassist Charlie Hart at London's Unity Theatre.

Two marvellous solos at a Mopomoso event circa 2005 round out an indispensable reminder of Khan's incandescent playing. The cover photo is an additional delight."