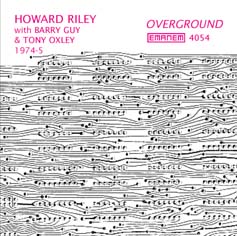 The music in OVERGROUND was recorded in 1974/75, and has never been issued before. It is a further development of the music on the 1973 trio album SYNOPSIS (already reissued on EMANEM 4044).

The three trio tracks are by the Howard Riley Trio of that period, with bassist Barry Guy and percussionist Tony Oxley, and show a general evolution to the point where all three of us were using electronically-altered as well as acoustic/amplified sounds in performance. PAGES is just Tony and myself, and is the only time we recorded in duo.

Both the pianos on the two-piano track RECOGNITION were played by myself, a musical situation made possible by the use of over-dubbing in the studio. I had recorded a complete two-piano LP (INTERTWINE on Mosaic 771) in this way earlier in 1975, and my motivation in recording this 'extra' piece was two-fold: one, to revisit some of the material I'd used earlier that year, and, two, to use electronically-altered as well as acoustic piano sound.

"Only recently released, this reveals another facet of a classic trio. Oxley is experimenting with electronics and Guy exploits a measure of amplification, but the real dynamism comes from Riley himself, occasionally amplified, overdubbed on Recognition and strongly forwarded on the ferociously beautiful Pages. All three players are already pushing at the 'jazz' envelope and though in later years Riley was to reveal more and more of his bop lineage, this period sees him and his like-minded colleagues exploring new territory. Guy is in stunning form on Loops and Oxley's straight percussion is alternately precise and wayward, but never dull"

"The material on OVERGROUND was recorded in 1974-75, and is all previously unissued. It's a valuable and fascinating release. The startlingly energetic Loops, though it works up sharp trio counterpoints, initially seems like a backward step. It's followed by a wickedly potent, colourfully sparkling Riley/Oxley duo, and Spliced, in which the three take turns to lead the group, enacting sudden switches in the order of instrumentation which, though presaged, still manage to sound surprising. Recognition is a Riley solo spot in which he overdubs two recordings of piano, and the best comes last, in the form of 20 minutes of the superb title track, an appropriately accurate summary of all this trio's strengths."

"Emanem has been busy mining historical recordings for gems, and as a consequence they have brought some valuable material to light. OVERGROUND, recorded in 1974-75, represents a step forward in the evolution of the same Howard Riley Trio that appeared in 1971 on FLIGHT (Future Music) and 1973 on SYNOPSIS (Emanem). Riley, unlike many free piano players, has a remarkable ability to eschew any sort of reflex or subconscious patterning: the listener gathers the sense that he chooses each note for each moment because it belongs in that particular context. He uses repetition as a conscious act to build tension, not as a tool to fill space. His companions on OVERGROUND, über-bassist Barry Guy and drummer Tony Oxley, share the same commitment to freshness and spontaneity. The three-way conversations that result here overflow with surprise, epiphany, and wonder. Even on compositions where Riley specifies instrumentation (as on Spliced) or uses graphic notation to enforce tone (as on Overground), the real beauty of OVERGROUND lies in the very spontaneous cycle of observation, statement, and reaction among these three musicians.

As a document of three intuitive, creative musicians working at the highest level of interaction, OVERGROUND is a brilliant success. In the purely acoustic setting, very few trios have ever reached this degree of cohesion, flow, and discovery. The intermittent use of electronics on this disc may distract some listeners--but if nothing else, it bears intrinsic value as a historical document of early experiments with live electronics in a free improv setting. Regardless, there's more than enough diversity of material on this disc to satisfy even the shortest attention span."

"A wonderful rescue job of previously unissued mid-70s recordings. In addition to Oxley's credit for live electonics, the back cover notes that 'all three musicians used pedal-controlled amplification at times'. They're not shy about using all that gear, and this CD offers more evidence that the British free scene of the time was very open to the use of electronic sound manipulation, and had already integrated the effects into their improvisational bag of tricks. The thrilling introductory section to Overground is a prime example, as readily identifiable sounds and not-so-identifiable noise interact as equals in the mix.

The opening track here, the first of three trio performances, is anything but smooth, a knotted and quietly intense exploration. Pages features the only duo recording of Riley and Oxley, a lovely piece that starts out as a sparse electronic soundscape, alternately soothing and foreboding. Eventually over the course of 16 minutes, the music turns into a robust piano and drum duet (with electronic assistance) before dissolving into something that sounds like a creepy science fiction soundtrack. Spliced is set up to feature each member of the trio 'in turn as the main voice in a duo setting with one of the other instruments'. It's the closest thing here to a standard head/solos/head format. Riley uses overdubbing to perform on two pianos for Recognition, a largely successful and absorbing rumination on interaction, which also uses electronic sound manipulation as one of its effects."

"Pages is a duet between Riley and Oxley; it starts in the middle of some industrially filthy piano overtones and some eerie electronically enhanced percussion sounds; after five minutes of masterful understatement Riley's fingers burst into dancing pirouettes as Oxley's workshop percussion takes one hell of a beating. Spliced includes short frenetic bursts of graphically notated trio activity and explores the shifting dominance of each instrument: Guy's slashing strikes followed by Riley's electronically alien piano. Recognition is performed by Riley on two pianos (using overdubbing) and electronic manipulation. He interacts wonderfully with himself; although there are thematic passages it sounds remarkably spontaneous as if he has an extra pair of arms hidden up his jumper. The concluding Overground is scored graphically; after some prolonged electro-acoustic foreplay it builds to a suitably spurty climax. The use of electronics may sound primitive to some but it takes the standard piano trio as far away from being standard as is possible."

"During the mid-'70s, Howard Riley developed a highly personal musical vocabulary that remained under-documented. His use on the acoustic piano of amplification and electronic effects usually associated with the electric guitar may sound a bit dated today, but it gave his music a distinct colour that is still very enjoyable. The material on OVERGROUND was recorded in two studio sessions in 1974 and 1975 with the same trio as the one found on SYNOPSIS (Barry Guy and Tony Oxley). The music was made available in 2001 only. Pushing further the use of electronics in these sessions, the trio creates surprising improvisations over loose structures devised by Riley. Oxley uses primitive electronics, Guy has pedal-controlled amplification. To the same toys the pianist adds distortion, which actually sounds pretty close to acoustic piano preparation. Things get very strange in the beautifully piano/drums duet Pages. Recognition is an overdubbed piano duet, the extension of an idea Riley had exposed earlier that year in his LP INTERTWINE. The piece gracefully moves in and out of the electronics. The bassist steals the show in Loops. Everywhere else all three musicians shine, showing how experienced this trio had become, especially on the 20 minute title track. OVERGROUND sounds more involved than previous recording by the same line-up and is more exciting in terms of techniques and ideas. Recommended."

"A note of caution or, in my case, a note of favour, this ain't your daddy's piano trio record. Perhaps, that is what makes OVERGROUND so appealing. Originally documented over twenty-five years ago, OVERGROUND is not merely surprisingly fresh. It is so remarkably ahead of its time that even after a quarter of a century has passed, the music is still the best piano trio material I have heard in a long time and probably will remain so for just as long. A recording of high substance and even higher musicianship."

"Another jewel edited by Emanem Disc. A killer experimental recording driven by the piano runs of Riley who is like the director of the trio building up some basement for the other two musicians to improvise and unleash their musical thoughts. I like specially the way in which Riley improvises, doing runs, chords and some interesting odd tempos and phrases while Barry Guy is doing his job on the double bass and Oxley crushes his percussion set doing the most amazing sounds. For lovers of experimentation. Favourite tracks: Pages and Overground (this track is over twenty minutes long and is a compendium of madness)."