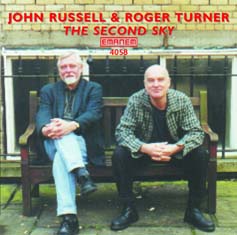 "John Russell stands out as one of the most original of improvising guitarists. Sometimes concentrating on his acoustic instrument's extreme upper register, he spends long stretches fingering where the fingerboard has ended. Much of what he plays takes place at manic speed, a whippet-fast scrabbling in the upper register, a music pitched to anarchist canines or the song of swarming bees. Whole passages are played in scratchy harmonics as Russell traverses the instrument, a rare isolated tone suddenly displacing the bending scales and clusters, the fiercely struck chord that bends in the air. Like other improvisers of the first rank, Russell has found a way to generate a personal continuum of sound while constantly adjusting, shifting and reinventing his part in relationship to his partners.

THE SECOND SKY pairs the guitarist with a partner of long-standing. That particular scratching metallic sheen - that consciousness of literal wires that Russell communicates consistently - meets an ideal foil in Turner, the most metallic of percussionists, whether he's using wire brushes, bowing cymbals, or striking metal with blacksmith force. The two share an alchemist's apprehension of metal, sometimes touching on sounds that are strangely Balinese."

"Five years ago, these two nonpareil exponents of guitar and percussion made a stunning record for Emanem named BIRTHDAYS. If anything, this new one is stronger, funnier and more decisive. It is a straight stereo mic recording, yet the way Russell and Turner use the capacity of digital for extreme sonic contrast and split-second dynamics suggests they've invented a new machine for etching music onto discs. Muscle, imagination and witty impatience are so deftly in tune, they only need a 1930s big band guitar and a plectrum, a drum set and a motley collection of found objects to create twists and knots that have never before been heard.

Drummer Turner has long worked with singers, including Annette Peacock and Phil Minton, and even at low volumes his percussive rasps and splutters pack the urgency and immediacy of their vocalese. Both players are so familiar with their chosen instruments that guitar and drum become prostheses, as immediate and expressive as mouth, larynx or lungs. Improvisation's refusal of genre entails reliance on elemental effects. If this music is inaccessible, it is because its detractors are too refined to credit an art made of direct physical shatter, splatter and slither.

Russell and Turner keep their attention on the sonic actuality, never surrender to their soundings. Because both push their technique to the edge, they're as surprised by their own notes as those of the other. Turner's sensitivity to pitch means his tuned percussion fuses with Russell's notes.

Two minutes into Dunt, there is an astonishing embrace between boinging cymbal and twanging string. Such moments are possible because Russell and Turner think along two tracks at once: they pursue rhythmic and melodic ideas with avidity, but hark to the total sound as well. A sudden mimicry will derail every analytic concept, yet preserve sonic continuity. They do not patronise listeners with prepared niceties, but expect them to be as moved and grooved and swung as they are, to enjoy their perpetual turnarounds and subversions as much as they do.

This music is full of the energies and structures of sound processes in the workaday world: carpentry, mechanics, traffic, dishwashing, demolition. This approach opposes the notion of music as a higher, independent realm. The only reason it may sound abstract or difficult is because the rhythmic granularity is so advanced and fine. Russell and Turner's sonic fencing is a cartoon for the ears. The idea that this species of improvisation is 'hairshirt cerebralism' rather than action-packed entertainment demonstrates how most music has been colonised by fantasies concerning social identity and star celebrity."

"The musical partnership between guitarist John Russell and drummer Roger Turner goes back to 1977. What must have sounded bizarre and radical at the time has by now established its own tradition. While it would be easy to fit these duets neatly in the niche carved out by Derek Bailey and John Stevens, that would miss their intimate originality. Like their previous duet release (BIRTHDAYS) this session captures the relaxed warmth of two musicians who are completely at ease with spontaneous improvisation. Unlike most free guitar players, Russell focuses on acoustic guitar, accentuating the natural sonorities of plectrum against strings rather than amplified or manipulated reverb. The pristine recording picks up every scrape, slide, and strum of the strings, from the quietest percussive textures to open, ringing resonance. His somewhat dry tonality is matched perfectly by Turner's tuned pinpoint attack. In some contexts, Turner can propel things with an almost overpowering thunder. Here, he matches his dynamics to his partner, darting around his kit with finely tuned gestures. Sticks bounce off loosely tuned drum-heads, chains rattle and cymbals clatter with masterful control. Though their spontaneous conversations consist of the thorniest of free interchange, they unfold with the unaffected informality of two old friends having a chat at the corner pub. Experience pays off with these two. This is all about detail and attuned listening rather than technique and bluster, a point that is lost on far too many players who delve into the realm of free abstraction."

"The monastic, ascetic form of improv that is most highly developed in Britain, and of which this is a superior example, demands either a highly concentrated focus on detail, or total submission to the sounds as an enveloping environment. Nothing between adequately answers.

Fire opens with throat-clearing noises from guitar and percussion - 'we're starting now, we're serious, and we'd like your attention' - and moves into an episode where it seems that the instruments are being honed (rather than tuned) and tested for their tessitura. It's almost like a cataloguing and assessment of resources, a marking out of territory before launching into the more intense 2.30, a cascade of ringing and thrumming. None of those insistent rhythms, of course, but an undoubted momentum. An even greater sense of aiming for a destination informs Piercing until, about four minutes in, you realise you're already there, you've pierced it, concentrate on the scenery and the activity. Russell gives us some flickering silhouettes of classic acoustic licks to help us settle in, and Turner does briefly run through some fragments of rhythmic insistence. Parapet deals with sustained textures, Eye Stone returns to restless interactions, aided by a bicycle bell and wah-wah cymbal here and there, Slowly Burning Wood spits and crackles from the get-go, bursting into flame well before the halfway mark. Dunt centres round a variety of plucked and pinged gestures. On Fulcrum, sounds breathlessly career, skid and collide. Finally, The Dodger thwacks, scratches, grunts, rumbles, leaps, mutters, slides, boogies, ferrets, harrumphs, peals, declaims, insists, argues, explains, twangs, shakes, rattles and scolds for 15 eventful, encyclopaedic minutes."

"Turner shifts from restrained touches John Stevens-style to mad outbursts. But even on Slowly Burning Wood, where he puts forward the tornado style that graced so well Konk Pack's 1999 CD BIG DEEP, he doesn't loose sight of Russell. The guitarist's tortured, angular style is not an easy one to get into: sudden chords, strangled notes, textural playing, all played on a particularly loud acoustic guitar. This is 'pure' British free improv, the no holds barred, no compromises accepted kind favoured by the aforementioned Stevens, Derek Bailey, John Butcher, etc. The beauty of this session resides in the way the two players truly connected, anticipated each other. Not seeing Turner playing the found objects he usually gathers around him gives an extra aura of mystery to his work, brilliant throughout. If BIRTHDAYS did not amount to much, this SECOND SKY ranks high in both musicians' discographies. Recommended."

"I wrote of guitarist John Russell and percussionist Roger Turner's previous duo album (BIRTHDAYS) that they articulated the shuffle and scrape of human existence. Indeed they have been actively doing so since 1977. THE SECOND SKY doesn't so much move the story on as provide yet more resonant material for the discerning listener. Not concerned with the grand plot or major events they examine the minutiae, offering, as with Samuel Beckett's plays, new angles that rejuvenate an otherwise tiring tale. Alive with invention, this excellent pairing provides an abstract take on reality. There is much to keep you occupied for hours in this superb album."

"Legendary guitarist John Russell unleashes madness in these duets with drummer percussionist Roger Turner. Russell uses an acoustic plectrum guitar which sounds sometimes like a banjo, sometimes like a sitar, sometimes like a harp (depending on how he plays it). A lot of weird sounding improvisation is done here. Russell plays tremolos, harmonics and some glissandos while Turner explores his percussion set in an odd manner. Check for example Fire at my Ribs with some strange drum patterns by Turner while Russell picks the strings of his guitar in a wild fashion. Interesting experimental duets. Favourite tracks: Fire at my Ribs, Piercing the Second Sky and Fulcrum."

"Roger's percz are clear as a blue sky on a sunny day, crisp but full bodied. Some listeners won't be able to (easily) identify with this type of music, as it requires a close listening... anything less will make it unintelligible for the 'average' fan. Those who are attracted to adventuresome sonic experiences will find their ears unwilling to break away, however! The playing is all 'of the moment'... there are some amazing stretches on Slowly Burning Word.... simply LOVED it! Listeners who demand something 'new' & 'different' in their listening will agree when I declare this to be HIGHLY RECOMMENDED."

"[Russell's} association with Turner now goes back some three decades. The first of their duo recordings on EMANEM Birthdays is, for us, one of the finest and most overlooked on the label, a quiet but incredibly intense documentation of two men working together at the limits of their shared understanding. This second CD is equally extraordinary."