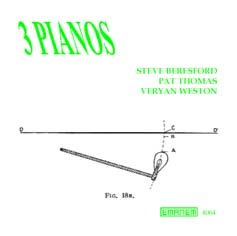 The combination of Pat, Steve and Veryan could not fail to result in the creation of an adventurous, genuinely interactive performance.

Each of the players has an open approach to the music. Their collective concern, devoid of competition and conscious self promotion, has produced an exciting and rather special recorded example of individual and collective improvisation.

The idea for this project came about during the mixing of the second London Improvisers Orchestra double CD (THE HEARING CONTINUES on Emanem 4203) on which these three pianists participated. Here was a recording studio containing not only three fine pianists but three fine pianos as well. Why not take advantage of this situation by having a session featuring just the pianists? After all, there are many venues where one is lucky to get one decent piano, let alone three.

On the appointed day, the three pianos were tuned, and moved into an equilateral triangle. The proceedings started off with four free improvisations. The first three are heard complete - the fourth is represented by its start and end. These were followed by the three duo performances, then three performances in which each of the pianists devised a restricting rule. The final free improvisation of the day is represented by its finish. All the music is presented in the order of performance.

"The image of 3 improvising pianists playing 3 pianos at once is sludge. That's exactly what this record is not. Beresford, Thomas and Weston have succeeded in creating a recording that is dense and intriguing because it does not thrash you about the room trying to keep up with all 264 piano keys. Instead, the interplay is graceful and precise, with each musician building layers into the overall sound, rather than filling in holes with frenetic finger flying. The recording itself arranges the pianos spatially - with Thomas in the centre, Beresford on the left and Weston to the right-helping our ears to perceive the movement of sound within the trio. The disc itself is also well arranged, with 5 trio improvisations beginning the CD followed by a trio of all the respective duos, then trios with each musician devising a restrictive rule and, finally, one last equilibrious trio improvisation.

The second track, ATLas, features dampened strings and percussive thwacks mixed with delicate pattering and fistful power clusters. A fun cartoonish frolic pervades the ambiance of BERmondsey, the trio track under Beresford's restricting rule. Nice quiet scraping that sounds like distant wolves howling appears in the middle of HOGarth, giving way to subtle percussive flourishes and detailed rhythmic balancing acts. The duet between Weston and Beresford, ELGar also has a particularly elegant rhythmic giddy-up and glide to it. The basic sound of 3 pianos, as wielded by the 3 sensitive and distinctive pianists heard here, becomes addictive. It sounds good, really good. Never muddied up, the keystrokes are clean and the result is more like a mosaic than a painting, preserving all the parts while remaining true to a unified intention."

"This should be must listening for every piano student in the world! Recorded in 2001 in London, the music is an excellent example of just how well improvised music can be. There is a boundless energy throughout, even in the quieter sections. Don't try & listen to this in the car, or as background, tho'... arrange it so there is nothing (else) to distract... preferably with headphones - then sit back & get ready to experience a whole range of rhythmic & tonal shifts that you've never heard the likes of before. This is, without qualification, the best piano set I've ever heard - & I've heard a lot of them! Gets our MOST HIGHLY RECOMMENDED rating, as well as the 'PICK' of the year for 'best trio/duo piano'."

"Three excellent improvisers, three very good instruments, and a studio with the perfect acoustics to host the six perpetrators. Their music is completely free of hints to jazz and stands idiom-less, non-referential except for the British Free Improv¹s own lingo. HOGarth stands out, the three players working inside and outside their instruments, achieving interesting sparse density. Beresford and Thomas's RIPpleway provides the strongest moment on the disc - a short, eventful, focused improv. It¹s all very well done, an exemplary improv session, but it lacks a bit of surprise, maybe."

"Amazing trio of pianists and excellent improvisers. The music here is really melodic at times and really dissonant in certain passages. It is incredible how well this three piano masters interact, doing sounds and progressions that are not common and doing certain harmonisation in certain notes here and there. New boundaries are broken by these three musicians who play their instruments with a lot of love, and squeeze them in order to get all the sound possibilities from them (even doing percussion on the instrument). There are a lot of exotic scales played in the trio improvisations, and the duets are fantastically constructed. I specially love the moments in which the three play all together!!. Favourite tracks: Atlas, Thornton Heath and SPEedwell."

"Multi-piano recordings tend to be dicey affairs at best. The usual problem is that players don't respect open space enough with all those keys at their disposal. This effect is usually exacerbated in a free improv setting, where no rules exist to keep everyone at bay. Fortunately, 3 PIANOS manages to avoid these problems, which is a tribute to the aesthetic awareness of the three pianists involved. Since the piano is at some level always a percussion instrument, the possibilities for interwoven rhythmic figures are nearly limitless. At the same time, the piano has the distinction of chordal expression, and that means harmonies (implied or explicit) can be overlaid and manipulated ad infinitum. Within this context of shifting interaction, repetition is at a minimum, and any kind of call-and-response operates at a higher abstract pull-and-tug level. Nobody can be pinned down and everybody plays with an ear toward accenting and shifting the greater whole.

The dozen pieces on this disc consist of various permutations of trio and duet formats: free trio improvisations, duo improvisations, and an interesting set of three short trio pieces with compositional restrictions. Of the three players on this disc, Veryan Weston stands out as the strongest team player. He seems to have a special talent for recognising the flow of ideas and building tangents which intersect and reinforce the overall momentum but do not distract from it. Steve Beresford, on the other hand, has a penchant for lyricism and an intermittent desire to bring the intensity of the group to explosive levels; his voice seems to occupy the extremes of the dynamic and emotional range. In the middle lies Pat Thomas, who has an open ear for rapid tonal and rhythmic shifts and does not hesitate to share. He's the voice of disorder and abstraction, if any one player deserves that title within this group.

As the disc proceeds, the pianists get together within each possible duo configuration, and these pieces end up especially revealing about the contrasts in musical personality between the players. The three duo pieces also provide some respite from the relative complexity of trio operations. But in the end, it's the trio pieces that make this disc special: because they work. And that's something special in the world of improvised piano music."

"It is as tough to write about as it is enjoyable to hear. This is in the main because the musicians, although all very distinctive personalities when playing with others, here fuse together to form a six-armed piano playing machine of frightening empathy, and to some large extent they form a single musical voice which belongs to all and none of them.

So, since Veryan Weston's style is lyrical and full of rubato even when the notes come quickly and at odd angles, so the group has a phrasing which is arching and full of fast-slow temporal variations. Beresford can be jokey and lays claim to a sort of anti-technique, but he's also technically very accomplished, and much of this music also walks that line. There's an element of deliberate awkwardness, but it's always clearly deliberate and there's real virtuosity here too. As for Thomas, he's something of a maverick, a player who enjoys the jerky, spasmodic and downright weird, and there's plenty of that here too. Yet each of the three men also cleaves to the others, so that there's a meeting in the middle. This being the middle ground between three of London's most dazzling free improvising pianists, one needn't fear that the results will be bland.

Yet they seem to have an endless fountain of ideas at their disposal in any case. The most natural comparison would probably be Howard Riley's duets with Keith Tippett, but even though the trio's music is logical in a similar way the changes come thicker and faster. Still, there's room here for development and thankfully there's little evidence of the kind of thrashing around and bulldozing of ideas which could come about when three such powerful instruments - and such powerful musical personalities - are brought together. The music is at all times organic, sensitive and dramatic. This isn't just one for piano fans; the storytelling at work here is impressive to say the least."

"Three pianos is surely asking too much, because two-piano outings are usually muddy enough. But 3 PIANOS succeeds because of the discipline and resourcefulness of three master free improvisers. Messrs Beresford, Thomas and Weston combine restraint with exuberance, at times offering textures of the utmost delicacy and transparency, at others letting loose to give an impression of Conlon Nancarrow-like polymetrics. Further variety is created by piano interior techniques."

"The exact similarity of instruments creates a unity of sound and a confusion of parts - it's difficult to distinguish who is playing what (outside of the stereo separation). However, the attitudes of the participants conspire to establish their own reality as they work together to create a cohesive whole. Though Beresford, Thomas and Weston come from individual experiences and improvisational perspectives, they do in this situation share a compositional attitude, which may be sensed in their music's use of common pace, dramatic episodes, complimentary phrasing and details, and an idiomatic approach to the piano which (even including some inside-the-instrument effects) makes their music more accessible and less foreign. They make a careful effort to design their pieces (however spontaneously), exchanging and altering roles, plotting arc-like structures, layering dynamics, and inhibiting a common (if primarily atonal) harmonic framework. This allows them at various points to build a dense, but interrelated, counterpoint reminiscent of Conlon Nancarrow's superhuman player piano works (ALTas), or alternate between sparse, open spaces and strong, mechanistic rhythms (HOGarth), among other less obvious strategies."