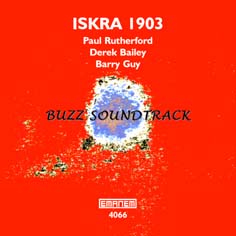 All previously unissued - except on film

To start with, it must be said that this is not a typical Iskra 1903 session. To hear how they sounded 'normally', listen to the highly acclaimed triple-CD set CHAPTER ONE on EMANEM 5311. What BUZZ SOUNDTRACK documents is the trio reacting to a film and providing a soundtrack to complement the events on the screen. Director Michael Grigsby probably also made some suggestions. The results could possibly be entitled "The Gentle Side of Iskra 1903", but don't let that put you off - the music is still very fine, even if not quite what you expect.

Michael Grigsby and Paul Rutherford knew each other socially at the time, so when Grigsby was making a film about a character called Buzz, he asked Rutherford to supply the soundtrack with his trio. The film with the Iskra 1903 soundtrack was released in 1971 but has apparently since become unobtainable. (Note that Rutherford formed Iskra 1903 in 1970, so this recording was made in the trio's first year of existence.)

Rutherford recently dug up copy tapes of this long forgotten music. The pieces are presented in the order they appear on the tapes, which may or may not be the order of recording and/or the order of usage in the film. The gaps between the pieces have been removed in order to get everything to fit onto a single CD, and also because the music seems to work very well as a semi-continuous whole.

The condition of the mono recording left a lot to be desired. Dave Hunt and myself have spent a considerable amount of time cleaning it up and making it more listenable, but even so it is still not perfect, and probably never could be. So please try not to be disturbed by the remaining imperfections - the quality and uniqueness of the music more than make up for such drawbacks.

"The music is mostly at a fairly low dynamic and energy levels, and much of the material is doelful and dirge-like. Untypical of the group's work it may be, but BUZZ SOUNDTRACK brilliantly illustrates the free improviser's concern with novel sonorities and techniques of playing the instrument. There are some lovely, eerie textures and Bailey's tremulous, trilling guitar-playing and feedback effects are beautiful.

Some tracks make for exceptions to the gentle approach - Buzz Trio 9 is skittish, while Trombone Solo 3 features cries and vocalising through the instrument, though Rutherford's playing throughout refutes any charge that he's just an effects merchant. Buzz Trio 8 is almost bluesy, a blurred al fresco The Train and the River. Davidson apologies for the imperfect state of the mono recording, but in fact he and Dave Hunt have succeeded in making it quite listenable. A superb release."

"The group indeed sounds different than on CHAPTER ONE, a lot more moody and introspective with strains of jazz weaving in and out (Rutherford is clearly working out a theme in Buzz Trio 4) The resulting music actually feels very similar in spirit and context to another Emanem archival release, the Spontaneous Music Ensemble's soundtrack WITHDRAWAL. We find the same ghostly contours, the same desire to provide an atmosphere while setting the music on its own non-decorative course. Gaps between pieces had to be set to a minimum interval to fit all the music on one CD, thus creating an artificial semi-seguing suite, but it works very well that way. Each of the 21 short tracks (only a couple go over six minutes) adds another hue to the soft palette. A recurring sequence of trios and bass, trombone and guitar solos (always in that order) give this album the scope of a full-fledged studio project. Sound quality is quite good considering the age of the tapes, making this a recommended CD."

"Emanem has been a primary source of Iskra 1903 recordings; the triple CD CHAPTER ONE documented their earliest work from 1970 to 1972, and BUZZ SOUNDTRACK is an important complement to it. Recorded early in the trio's existence, it is the soundtrack to a long forgotten film. The trio played while viewing the film, providing a soundtrack to complement the events they saw on screen.

Unlike most improvised music, the players are not primarily reacting to each other's playing but to the stimulus of the film. However, this music definitely stands alone, not needing any visuals to enhance it. Similar in character to the trio's earliest work on CHAPTER ONE, the defining qualities on show are subtlety, restraint, patience and sensitivity. The music is allowed to evolve slowly without any of the players forcing the issue. All three sublimate individual ego to the greater totality, content to leave each other ample space in which to create, without the need to constantly assert themselves. If one recognises parallels between improv and conversation, this music is not idle chatter or a heated argument; it is a polite, formal debate.

Given that it is over thirty years old, BUZZ SOUNDTRACK sounds remarkably contemporary; the understatement and restraint displayed are reminiscent of the work of New London Silence players such as Mark Wastell and Rhodri Davies. This welcome release can stand on its merits; it is of far more than historical interest."

"The slow motion unfolding of these pieces isolates the beautiful sounds embedded in even their most cantankerous outbursts. The luminosity of Rutherford's long tones, Guy's glissandos and Bailey's pedal-enveloped chords are undiminished despite a marginal mono recording. At times, the music is almost too inviting and too accessible, given Iskra 1903's revolutionary aura. BUZZ SOUNDTRACK will force enthusiasts who thought they knew this trio inside out to listen to them anew."