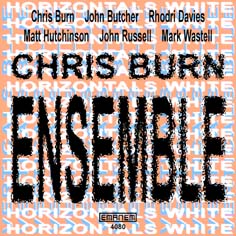 Ensemble was formed in the late 1980s as an eight-piece group that included Chris Burn, John Butcher, Matt Hutchinson and John Russell amongst its founder members. This octet lasted until the mid 1990s, and can be heard on their initial studio CD made in 1990, CULTURAL BAGGAGE (Acta 5), as well the recently released concert recording, THE PLACE 1991 (Emanem 4056). By 1997, when NAVIGATIONS (Acta 12) was recorded, the Ensemble had expanded to eleven, with Rhodri Davies and Mark Wastell amongst the additions.

For various logistic and musical reasons, the group had shrunk to six in 2001 when the recordings on this CD were made. The first two pieces come from a special Mopomoso evening at the Red Rose. The first half (not heard here) featured solo and duo performances by Ensemble members. The second half (heard here in its entirety) comprised two sextet improvisations.

The second half of this CD features all of the Ensemble's performance at the 2001 freedom of the city festival. Unfortunately, Rhodri Davies was working elsewhere at the time, so the group was temporarily reduced to a quintet.

Unlike the earlier Ensemble CDs, all of the music on this CD was freely improvised. Ensemble's prior performances usually involved some free improvisations, but compositional frameworks devised by Chris Burn, John Butcher and others were more prevalent.

The music hardly sounds as though it is being performed by a smaller group - at times it creates dense passages that sound as though considerably more people were involved. All of the participants are resourceful and responsive enough to create very varied music sequences on the spur of the moment. All use the full potentials of their respective instruments, so that apart from Matt Hutchinson, no one used any electronics or amplification.

Since these recordings, the line-up of Ensemble has become somewhat flexible. So this CD may well end up being a unique example of this particular edition of Ensemble. Whether these fine improvisations bode any changes in direction remains to be seen.

"Since its inception in the late 80s, pianist Chris Burn's Ensemble has developed into one of the pre-eminent collectives of forward-thinking collective playing.

Each of the two sets provides multi-hued settings for the collective exploration of intricate gestural details. Here, microtones, clipped and damped strings, fluttered multiphonics, shimmering electronics, and hanging shadow notes slowly coalesce, morph, and decay over the course of extended interplay. Though individual voices move in and out of primary focus within the context of the focus within the context of the constantly evolving cross-currents of the ensemble, the group collectively steers the improvisations from sections of hushed, microscopic gestures to bristling density with astonishing attention to developing form and detail. Evan as they reach tempestuous heights, there is always a transparency to the sound, revealing the singularity of each member. On the three pieces recorded at freedom of the city, the quintet (without Davies) creates a more open tableau. Here, one can more readily discern how ideas are passed around the group. Butcher's burred trills may elicit scrubbed string overtones from Russell, which are cushioned by rumbled hums and darting scribbles from Hutchinson's synth, mirrored by Burn's damped strums of the piano strings and Wastell's scraped harmonics. Motifs pop up and then are rapidly grasped and transformed by each of the players and fed back in to the collective mix.

This release continues to cement the standing of the now fluid cast of Ensemble as unparalleled collaborators, and of Burn as one of the leading instigators of engaging and challenging improvisation."

"Both sets are comprised of free improvisations, instead of the more structured pieces that are feature on the Ensemble's three previous albums. Some may say that the group has grown old enough to face improvisation without a safety net, but that would be unfair as compositional canvas usually don't make things easier. Yet, Burn and co. have rarely sounded this focused and vital, the music this appealingly strange. In the intervening years, all the musicians have thrived to push their playing away from the sounds usually associated with their instruments. This is particularly true of Butcher (who breathes, gurgles and burps, but rarely emits a 'note'), Wastell (king of microscopic bow scratching), and Burn who's inside-piano playing has grown very remote from what can be heard on his 1997 solo CD MUSIC FOR THREE RIVERS. The 22-minute Horizontals White and the closing Still Life on May Day provide spine-tingling moments, but there is not a dull minute on this hour-long disc. Recommended."

"2 minutes into the title track John Russell flies his pick 24 times over dampened guitar strings, like a sudden flapping of wings sweeping into and out of the room; Matt Hutchinson's synthesizer drones; John Butcher's saxophone pops one breath; a rumbling chord from Chris Burn's piano decays; Mark Wastell bows a fiercefully precise yet hushed line from his cello; Rhodri Davies buoys the reverberation from a low harp string; something tinny scrapes the floor. These 10 seconds swiftly appear after a brief pause springs up from the lurching, provisional motions of the improvisation's opening minutes; the hectic intrusion leaves an ominous residue, and an emotion rarely excavated in improvised music materializes - fear. For the next few minutes, the group grapples with what happened, and what it might mean for the future, their actions conjuring or containing the suspense of the inevitable: sonic emergence during time's unceasing unfurling.

Though the lineup slightly shifts from recording to recording, the last 15 years have produced four CDs by the Chris Burn Ensemble, each one upping the ante for riveting improvisation. Comprised of two London concert recordings from 2001, HORIZONTALS WHITE brings light to a new range of communicative interplay and atmospheric layering. An interchange of quick saxophone puckers with gently fluffed guitar harmonics and a sparking electronic trill mark the beginning of There Were Five In Eight. Harsh, prickly dissonance during Verticals Blue lapses into the placid serenity of small, sparkling sounds. Like good news on a rainy day, a squeaky flowering flashes through during the slow-moving tension of microsonic layers halfway into Horizontals White. The willingness of the Chris Burn Ensemble to explore darker emotions and how they contrast with the beauty surrounding them (and vice versa) returns the depth of potential implied by - but frequently missing from - improvised music back into its practice."

"Though fundamental colours like guitar, sax, piano, cello and harp are used, the music has a spacey 'electro/metallic' quality that carries the players near territories not far from some Morphogenesis moment, only with just a touch of 'lucid madness' in addition. What's incredible here is the complete disintegration of the sources, as breathing, percussion and plucking become one - a creature suddenly waking up, looking herself in the mirror, her constitution continuously changing - and there's no time for anyone to adjust their ears. The surprising quality of this ensemble's vibe is a top asset; starting from near silence, Burn and his comrades take you by the hand and introduce a cauldron of tasty, unexpected flavours at the same time enforcing highly active listening."

"Chris Burn is another musician who is adept at creating an environment that opens the musicians around him to free possibilities. Much of his recorded work has been with an Ensemble that ranged from eight to eleven musicians, but here we get a 6tet and a 5tet. Perhaps the amazing thing is that with music like Burn's - filled with silence, extremely delicate, almost sololess, focused on a group ambience - this 5tet sounds every bit as big and full as the earlier music.

It is hard to describe a music that creates such an aural room around the l istener, and because all of these musicians are devoted to the collective sound, and that each of them are exploring the non-standard sounds of their instruments, Burn's music tends to become more an environment than a structure. They have replaced the crescendo-decrescendo cliché of free music with a shifting density vs. silence, that has nothing to do with volume or speed. Having said that, the 'aural room' the ensemble creates here is a pleasure to exist within, if you relax and let it enfold you."

"What matters is overall result an process, and this is where improv's strength lies. When it all comes together - as it does triumphantly soon after the start of Five in Eight, where you can't tell how many musicians there are, who plays what or on what instrument, but are drawn into a unique, evanescent and therefore cherishable soundscape - there are few musical experiences more magical.

The music gets quite dense in places but is generally fairly reflective, though some passages have a more rhetorical cast than others (later episodes in Night-Time Nostalgia for example) and others get quite visceral - around the halfway mark of Still Life for one. The addition of Davies on the first two tracks expands the possibilities and the potential density, volume and complexity, but makes little difference to the overall nature of the music, since these musicians have such unity of purpose and interact with such responsiveness that the group's character is constant, however many heads the creature has."

"The Red Rose gig finds the group in exuberant form, a quality not normally associated with the patient exploration of free improv. There's violence too, contained within a thoughtful collective ethos - the lack of compositional structure goes almost unnoticed."