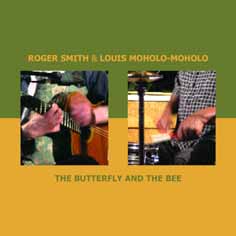 THE BUTTERFLY AND THE BEE

"The Smith/Moholo duo disc is easily one of the most excellent recordings I've heard so far this year."

"Even better is THE BUTTER-FLY AND THE BEE, which I predict will be showing up on top ten lists at the end of the year. Freed to stretch out, they make no attempt to duplicate the dust devil swirl of their first encounter, but work much more with space and restraint. The title track is like a brisk walk through a cold fog bank, the drummer's cymbals the mist, the guitarist's pointed notes the stinging spray of ice. The hushed Webern in Africa is as reduced and concentrated as you'd hope for, but refuses to play any genre cards. And on the closing Uncancelled, Smith's stuttering single-note runs seem to deflate Moholo-Moholo's ponderous timpani beats, so that the air blows out of them and through the bell tree, thus ending the album on a note of pure poetry."

"Former Brotherhood of Breath drummer Louis Moholo and British free-form acoustic guitarist Roger Smith lay their cards out on the table during this extremely attractive studio set. Essentially, neither man acts as an antagonist here. It's more about intrinsic communication, topped off with acutely enacted improvisations featuring great depth and variable rhythmic manoeuvres. Moholo's complex drumming parameters are counterbalanced with his alternating use of small percussion instruments. They pursue mechanisms for altering flows and pulses in areas where Smith's buzzing lines or fervent strumming sequences parallel Moholo's asymmetrical movements.

The duo tones it down in spots. For example, on the 24-minute opener and title track, Smith executes a discrete ostinato groove, which is expounded upon by Moholo's lightly-tapping tom-tom movements. In addition, the musicians occasionally generate hypnotic effects and low-key subtleties. However, there is so much going on throughout these superb performances it would literally take volumes of text to accurately describe the inexact science that these men pronounce here. Sure, it may seem like a paradox, but that's where part of the beauty lies. It's chiefly about the improvised modus operandi these fellows abide by that intimates a rather successful component to the grand scheme of matters. Or chalk it up to m usic with a sense of purpose amid a positively charged identity that yields a state of free-form bliss! (Zealously recommended…) "

"As his four solo Emanem discs testify, Roger Smith is a true virtuoso of the nylon-string Spanish guitar, but his subtle fingerings and arpeggios were often barely audible in the SME's acoustic sound mix. On this studio recording, the balance is rectified, and the music flows in full spate. Moholo rattles his snare drum like no one else (he also handles timpani and even a music box) and Smith pounds his lower string dangerously, in a rumble in the jungle quite unlike the conscious call-and-response of more 'classic' insect music. There are plenty of unexpected turns in this refreshing exchange of messages and signals that effortlessly transcends fads and frontiers."

"It's exciting to see the activity of this duo. Smith was a close musical associate of the late influential drummer John Stevens, and played with him as part of the Spontaneous Music Ensemble for many years. The sense I've gathered from various interviews with Smith and in other writer's pieces on the guitarist is that he has done less public playing, and, when appearing, has gone mostly solo since Stevens' death. So it was good to see that, according to Davidson's notes to FREEDOM OF THE CITY 2004: SMALL GROUPS, it was Smith's idea to play with the celebrated South African drummer Louis Moholo (billed as Louis Moholo-Moholo on these new releases, reportedly due to becoming the head of his family after his mother's recent death). It's a treat to hear the guitarist on record with a percussionist again, and particularly one as seasoned as this.

That double-disc live set has the duo's first meeting recorded for posterity, in excellent sound. It is not the 'insect music' of the SME - this is wide, washy, orchestral texture music, full of force and grinding activity. Smith is amplified, by microphone and not pickup, I assume, more to engage with the breadth of the drummer's sound than for aesthetics independent of that need. Because Moholo is LOUD. The cymbals ring for miles, drums ricochet off the venue ceiling, patterns tattoo the ears like camera flashes. So instead of a tiny-elements-interlocking-thing (Steve Beresford's phrase) we have more of a groove-based music, as you might expect with knowledge of the drummer's work. Not that there's a bar of 4/4 to be found - or any regular time signature for that matter - it's all scattershot constant rhythm and propulsion.

THE BUTTERFLY AND THE BEE is of a piece with the FREEDOM OF THE CITY material. It was recorded a few months after the festival, and the duo picks up where they left off. That is, at the start of something grand. The festival pieces, the long The Very First Time and brief coda The End of the Very First Time, showed the duo to be spending most of their energy (the first 20 minutes or so of their set) sounding off and finding their sonic space in relation to the other. It's 20 minutes of borderline cacophony - which is quite something considering that Smith is only equipped with a nylon string guitar. But he thwacks away at the strings and scratches at the fretboard, making the guitar sound, remarkably, like another percussion instrument. It's a bit relentless, but compelling-though it's that last ten or so minutes of the set where something special happens. This is where my favourite aspect of Smith's music comes to the fore: a delicate, nearly Elizabethan sense of composition and technique, like an improvising John Dowland or William Byrd. And that with alert, orchestral background and side-by-side commentary from Moholo, these ten minutes deliver on the promise of the pairing.

And actually, it's not exactly true that they pick up where they left off on BUTTERFLY - half the music is as blustery as that of the festival - but then there's much more subtle and relaxed exploration too. One difference in the two recordings is the presence of Moholo's auxiliary percussion in the studio. Chimes make a reappearance from the stage, but in addition to that, and colouring the session significantly, are orchestral bass drum and tympani. The additional rumble only accentuates the sweeping orchestral tone that was already present in the duo's first meeting. It would be a delight to hear this duo play more-to hear what directions they might settle into. It seems that there's a lot of ground to cover that's only been suggested at in these first two meetings. So here's to more music from this duo, and more on-record appearances from Roger Smith to come."

"It takes a while to get used to the maculate interplay between a perspicacious drum painter and a man whose style leapfrogs between sporadic windows of technical legalism and an all-out dance of the fingers on a percussive instrument - yes, his guitar. This music has many qualities that made me think to natural inexplicabilities and environmental infiltrations in our daily life, like when one can hear the distant rumble of an approaching storm preceded by the first rain drops. Smith and Moholo-Moholo don't offer easy escapes or safety handles: their total non-conformity - even in an open setting like an improvisation - swoops on the listeners forcing them to penetrate the details, to make contact in the flesh, to abandon diffidence in order to enjoy difficulties like if they were instant evolutional processes as opposed to an unwanted helter-skelter in their encrusted mental habits."