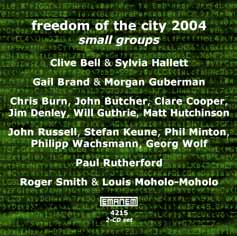 Digital concert recordings made in London
at the Conway Hall by Sebastian Lexer - 2004 May 2
Total time 153:11

This album features some of the very varied small groups that I asked to perform on the second day of the fourth FREEDOM OF THE CITY festival. (The other two days were organised by Evan Parker and Eddie Prévost.) Three of the groups were performing for the very first time, whilst two of the duos had been in existence for a couple of years.

As in previous years, the main problem in organising this festival was not who to invite, but who to leave out - there being so many fine improvising musicians based in London (and elsewhere). Several people who had not previously appeared at the festival were featured this time, including several visitors.

The other recurring problem was how to fit so much good music on to a double CD. All of the performances on this album are complete, except that Chris Burn opted to use just two of the four pieces his group played, and that Roger Smith and Louis Moholo segued directly from their sound check into their performance, so their start was not recorded. It is hoped to use some of the other performances from the festival in other contexts.

John Russell has been organising groupings under the title Quaqua (the Latin for WHITHERSOEVER) for many years. On this occasion, he decided to make up a quintet with musicians he has recently worked in duo and trio contexts. They made a very homogenous group even though they had not worked as a quintet before.

Paul Rutherford pioneered unaccompanied trombone in free improvisation - he has been performing solos for around 35 years, and they are still full of surprises and delights.

Clive Bell and Sylvia Hallett have been performing as a duo for some time now, but only recorded their first duo album, THE GEOGRAPHERS, shortly after this festival performance. Bell has a vast collection of mainly Asian wind instruments, and on this occasion used ones from Turkey, Japan, Thailand and Crete. Hallett bowed her viola, bicycle and saw, as well as using digital delays.

The personnel of Chris Burn's Ensemble has been in a state of flux recently, and this half-Australian one-off line-up came about as a result of some last minute changes. As with everything else on this album, the music was freely improvised. Note that the guzheng is a horizontal Chinese harp, and a flax is a flute with a saxophone mouthpiece.

Gail Brand met Morgan Guberman when visiting the San Francisco area in 2002. As a duo called Planter Box, they have performed several times in America - this was their second European appearance. Studio recordings can be heard on BALLGAMES & CRAZY.

Roger Smith wanted to make music with Louis Moholo, so this meeting was organised. This really is THE VERY FIRST TIME, since their set started with their sound check (not heard here). The second time occurred a few months later, when they recorded the album THE BUTTERFLY AND THE BEE.

"A fabulous quintet opens the first disc: power and delicacy, finesse and attitude are splendidly showed by John Russell on his abrasively detailed guitar; Georg Wolf (double bass) and Philipp Wachsmann (violin, electronics) depict their ambitious consistence while paving the way for the multiform protean playing of Stefan Keune on sopranino sax. Phil Minton's gurgles and squeals are more restrained than usual, but not less enjoyable in their inventiveness.

In Titled improvisation (1-3), more than 'playing notes' Paul Rutherford 'carves silence': the sapient fluctuations of Paul's lines are a precise reminder of what an improvisation should be in terms of new forms and self analysis, confirming his fundamental role in these contexts.

No wonder that both Clive Bell and Sylvia Hallett have been featured on some of Emanem's most beautiful records: their arsenal of exotic flutes, self built instruments and digital delay yields atonal hypnotic loops, spurious vibrations and cathedrals of suspended soundfields. Bell and Hallett's imagination reflects its decomposed shimmer over a four-piece span, delivering from tension while directing everyone's energy towards a circular path.

The most peculiar group in this set opens the second CD with two mysterious tracks, full of ubiquitous figures and increasing nervousness; Chris Burn, Will Guthrie and Matt Hutchinson sound like a giant throat emitting broken harmonics and splinters of shapes; instead, John Butcher, Clare Cooper and Jim Denley use that cavity to hover all around the place in their specialist approach to the ramifications of unknown instrumental gestures.

The Gail Brand/Morgan Guberman duo is one of proven greatness and the two long improvisations contained here are a magnification of idealistic freedom as opposed to corporative noodling; Gail and Morgan morph their trombone and voice in continuous unbelievable collages of challenging dexterities.

Roger Smith and Louis Moholo-Moholo close the show with a juxtaposition of juggling rolls, fractal tempos, perverted arpeggios and caustic chords: their very first meeting represents the line of continuity among improvising artists devoted to the cancellation of genre boundaries in an ongoing effort to maintain purity of expression."

"Emanem is without equal as a purveyor of improvised music, with a catalogue now numbering over 130 albums. The label's annual FREEDOM OF THE CITY releases serve several functions. They provide an excellent record - aural and photographic - of the festival itself, whether or not one attended; they are a great way for newcomers to sample the label's music (effectively acting as samplers, even though the music is not available elsewhere); they are a good way for old hands to hear artists new to the label. And for everyone, old or new, they make damn fine listening. As in past years, SMALL GROUPS is liberally interpreted, ranging from a solo performance - Paul Rutherford, in majestic form - through to a sextet.

Three duos, each of which has also had an entire Emanem CD of its music released, provide particular highlights of this album. Clive Bell and Sylvia Hallett are well matched in their sense of adventure and exploration; their combined array of instruments must be as diverse as those of any duo, but the instruments are not gimmicks (even - or especially - Hallett's notorious bicycle wheel); they are employed because they give the sounds needed for the performance. Lovers of drones (among which I definitely count myself) will be delighted by the slowly evolving soundscapes that they achieve. Over the top of these, they add a range of frequently unearthly and eerie sounds. Without seeing these sounds being produced, one can only wildly speculate - or else just immerse oneself in them. The totality is worthy of the description 'ghost trance music'; pity it's taken. Check out their new release, THE GEOGRAPHERS, for further explorations.

For me, Gail Brand and Morgan Guberman were one of the unexpected highlights of last year's festival. Guberman's vocal gymnastics (the only phrase that does justice to what he does) melded well with Brand's trombone. Often, they are most reminiscent of a Chuck Jones cartoon - unpredictable, anarchic, funny and fun. In performance, the two struck sparks off each other, something that was not fully captured on their 2004 duo album, BALLGAMES AND CRAZY, but is revealed by the two tracks here.

Roger Smith and Louis Moholo were playing together for the very first time (hence the track titles!), an incredible fact given the combined total of their years on the scene. It is an inspired pairing, instigated by the guitarist. Smith's guitar playing is very percussive and at times this is more of a percussion duo than anything else; however, Smith is apt to throw in snatches of beautifully melodic playing when one is least expecting them, to stunning effect. Given the title of this duo's subsequent release, THE BUTTERFLY AND THE BEE, I am tempted to speculate which is which, but that's no easy task, as both players can equally float and then sting to devastating effect!"

"This set features six groups, ranging from solo performers to sextets, a palette that brings a lot of variety to the mix. Disc 1 features three sets, the longest and most unorthodox being a sequence of four duets by Clive Bell and Sylvia Hallett. These two have been performing together previously, but this half hour of material is their first recording available. Their blend of unusual instrumentation (Far-Eastern folk instruments and bicycle wheel) and cheerful interaction provides one of the album's highlights. Trombone master Paul Rutherford delivers a very fine but otherwise unsurprising solo improvisation. The other group on disc one is a quintet put together by guitarist John Russell - their 22-minute Whithersoever is a class act in European free improvisation.

Disc 2 features three more groups, starting with an unusual incarnation of Chris Burn's Ensemble. Alongside long-time members John Butcher, Matt Hutchinson and Jim Denley, we find guzheng player Clare Cooper and Will Guthrie on amplified percussion. Their presence brings a different flavour to the group's two pieces. Gail Brand and Morgan Guberman have recorded with BALLGAMES AND CRAZY one of Emanem's most striking releases of the early 2000s and their 22-minute set here lives up to the originality of the studio album. Guberman is a force to reckon with, owing much to Phil Minton yet developing a voice of his own as he often resort to actual words in order to fuel his phonetic inventions. Guitarist Roger Smith and drummer Louis Moholo form the unlikely pair of this edition and this, their very first meeting, features them looking for - and finding - common ground. Their studio CD THE BUTTERFLY AND THE BEE contains superior material, but this 36-minute trailer is surely worth your time. Sound quality is excellent as always, making FREEDOM OF THE CITY 2004 as essential a document as the previous releases."

"Martin Davidson has been documenting the free music scene in London for much of the last three decades, and his label, Emanem, has a catalogue chock full of what is increasingly coming to be thought of as the traditional strand of free improv (i.e. played mostly on 'proper' instruments rather than laptops, and driven more by technique than technology). He's also one of the programmers of the annual festival Freedom of the City, and this selection of small group activity, recorded on a single day in May 2004, is characteristic of what's good about both the festival and Emanem. As well as three imaginative solos from trombonist Paul Rutherford, there are three duos.

But each of the CDs begins with music by a larger group. A quintet of John Russell, Stefan Keune, Phil Minton, Philipp Wachsmann and Georg Wolf kicks off disc one, and whenever the music threatens to settle for too long in any one place it's often dramatic intervention by John Russell that gets it moving again. The first piece on disc two features a Chris Burn ensemble. It is, in the main, an awkward, untidy affair. But during the group's second piece the disparate elements fall neatly into place and the configurations that ensue are highly rewarding. Of the duo sets, Bell and Hallett's is the most wide-ranging and cohesive. Theirs is a folk music outside of tradition, something new and really rather beautiful."

"Paul Rutherford turns in a reliably varied trombone solo, while an antipodean-dominated scratch version of Chris Burn's Ensemble musters a suspenseful performance that shows how heavy airiness can be. The highlight, however, is the shockingly balanced music that the usually retiring guitarist Roger Smith and the generally harder-driving drummer Louis MoholoMoholo make on their very first performance together. This is absolutely thrilling stuff, endlessly changing but never at a loss. And it falls to another duo set to impart the choice pleasure of being knocked out by players whose charm has previously eluded me. Clive Bell, who plays various Asian wind instruments, and Sylvia Hallett on viola, bicycle wheel, saw, and digital delays, share a taste for continuously flowing sounds and an uninterrupted pulse. They bring out the best in each other's playing, which gets impressively dense and woolly without ever abandoning an allegiance to tonal attractiveness."