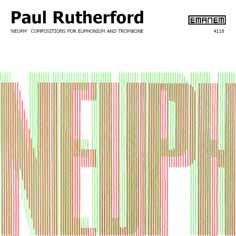 NEUPH was Paul Rutherford's third solo (i.e., unaccompanied) record. The first two were THE GENTLE HARM OF THE BOURGEOISIE from 1974 (now on Emanem 4019), and OLD MOERS ALMANAC from 1976 (which, sadly, has not been issued on CD yet). NEUPH was different in several ways from these two solo trombone concert recitals: (a) it involved a euphonium as well as a trombone, (b) it was recorded in a studio, and, (c) most of it involved over-dubbing. The only strictly solo piece, CHEFOR, features the euphonium.

27 years later, Rutherford cannot remember exactly how he went about creating these montages. It doesn't really matter - the important thing is that we have the end result to listen to and wonder at. One of the pieces (THREE LEVELS) has one of the channels played back at double speed taking the trombone into the trumpet range. Whilst listening to a double speed playback, Judy, the dog who lived at the studio, started howling and was recorded and over-dubbed to create PAUNCH AND JUDIES.

I must confess I was disappointed with this music the first time I heard the LP. I had been a fan of Rutherford's solo work since I first heard him playing alone in the early 1970s, and rated him on a par with Derek Bailey and Evan Parker. Listening to NEUPH, however, I kept wishing that the other Paul Rutherford(s) would go away. But which was the Paul Rutherford, and which were the others? Further listening revealed that all the Paul Rutherfords were playing well, and, most importantly, they meshed together to create a very fine whole.

Added to this CD two superlative solo trombone concert performances recorded two years later - both previously unissued. The ROMAN one came from a concert that otherwise featured a big band with guests. The PISA one was Rutherford's solo contribution to the Pisa 1980 Improvisors Symposium - a series of concerts that also resulted in the numerous small group performances, some of which can be heard on Psi 04.03/4.

"In Paul Rutherford's solo discography, NEUPH creates its own category. Recorded in the studio in 1978, this album features the man equally playing trombone and euphonium (something he doesn't do often), and overdubbed up to four times (something he would never repeat). Whether you see it as accretive group improvisation with oneself or layer-by-layer instant composition, you do get multiple Rutherfords for the price of one - without the narcissist aura one could expect. Improvisers have rarely experimented with multitracking before the computer age. The music is obviously more dense than usual, without going overboard. Actually, Rutherford managed to put together strong pieces featuring multilevel dialogues and exploring textures and concepts that go beyond his 'traditional' solo work. Therefore NEUPH is more than a curiosity, but a very interesting development of his art.

The original LP opened with Yep 321 for two euphoniums, which put even the Rutherford connoisseur into immediately alien territory. Emanem's CD reissue slips in a live trombone solo from 1980 before the LP material, which makes things a bit less brutal. Realign 4 for four trombones is four times as dizzying as THE GENTLE HARM OF THE BOURGEOISIE, but Phase 2/2 (featuring two trombones and two euphoniums) is better, the artist sounding like a whole improvising brass quartet instead of just four incarnations of himself. On Three Levels, one of Rutherford¹s three trombone tracks is played back at double speed, giving the impression that a trumpeter has joined him. Despite all the mirroring and studio trickery, the strangest sounds are to be heard in Chefor, a simple euphonium solo that makes you wonder why he has not used that instrument more often. Emanem's reissue concludes with an extra live trombone solo from 1980, a gorgeous 17-minute piece recorded at the Pisa 1980 Improvisors Symposium."

"The information level is high throughout, as one might expect - one Rutherford is usually enough to turn a trombone inside out, so you can imagine what three or four of them sound like - but the music is, despite its considerable complexity, instantly compelling and rewarding. Realign 4, for four trombones, and Three Levels, for three trombones (one double speed) are almost Xenakis-like in their intensity. Of course, Martin Davidson isn't in the habit of releasing CDs that fit comfortably on one side of a C90, so there's also some extra material in the form of two mind-bending trombone solos, recorded in Rome and Pisa in 1980."

"This album sees Rutherford improvising solo and against himself through multitrack techniques (which are also used to add the delightful howling of the dog Judy in Paunch and Judies). Paul shows his methods via melodious morsels of persistence and thematic slipstreams bringing out his off-the-record statements, which to this day sound both relaxing and dangerous to normality. In Phase 2/2 the old professor superimposes trombone and euphonium - two tracks each - layering series of squiggles that look like the most refined handwriting as we hear the final result. While listening to some of these improvisations, my mind thought about the music converging towards a high point right over my head, like if Rutherford's many short messages were an indication to a superior level of awareness. We all should try to follow these peculiar signs."

"Paul Rutherford's THE GENTLE HARM OF THE BOURGEOISIE, a selection of solo trombone improvisations recorded during 1974 at London's Unity Theatre, is an enduring testament to imaginative momentum and technical spontaneity that set free playing apart from other means to musical expression. When NEUPH appeared on vinyl in 1978, it was immediately apparent that this was a very different affair, a series of more deliberated and audibly composed pieces, multitracked in various combinations using trombone and euphonium. On the valved instrument, Rutherford tends to sound more tidily buttoned up, more allusive and less unconstrained than when sliding inspired on trombone. Overall, the studio mediation makes for a more formalised listening experience, even when - on Paunch And Judies - the constituents are double speed trombone and howling dog. In 1978, I recall sharing the reservations now expressed by Martin Davidson in his sleevenotes - it seemed that the improvising spirit had somehow been compromised by compositional guile. In 2005, with a rather different perspective upon what the free improviser's art can entail, I would concur with Davidson that NEUPH is very fine. And to emphasise the necessity of this reissue, the studio set is framed with a pair of previously unreleased trombone solos from two 1980 Italian concerts that reflect Rutherford's artistry in full unadulterated flow."

"This latest collection reissues the contents of an LP on the SFA originally released in 1978 and adds concert music from two years later that is of a different cast. The twist to the studio portion of the program lies in Rutherford's shrewd application of overdubbing to multiply his horns into various ensemble combinations. Also notable is his use of euphonium on four tracks, and in two instances a trombone played back at double tape speed to create a tonal range closer to that of a trumpet.

A Rutherford album wouldn't be complete without some wry humour, so to satisfy that requirement he includes the unsolicited and quite animated reactions of a yelping dog on "Paunch and Judies. Rutherford doesn't shy away from including evidence of the effort expended in birthing his sounds either. Grunts, wheezes and coughs are recurring parts of the process, particularly on the solo pieces. Yep 321 hinges on the garrulous chatter of a pair of euphoniums, their blustery tones twining in an expansive chamber-tinged conversation filled with flocculent asides. Realign 4 convenes a closely-packed quartet of similarly talkative trombones flanked by the occasional clatter of metal slide percussion. The comparatively austere Chefor narrows the field down to a lone and lonely-sounding euphonium."

"Rutherford makes use of both trombone and euphonium and experiments with tape-speed to add lines up in the trumpet range; the results are as dense as a graffiti-scribbled wall, and have more in common with aleatoric composition - say Cage or Xenakis - than with the give-and-take approach of improvised music: most improvising musicians instinctively avoid stepping on each other's toes, whereas this music is all about collisions and near-misses. It's tempting to try and make sense of this squirming self-contradictory mass of lines by just following one horn for a while, but unless you're Philip Marlowe you'll be shaken off its tail only seconds later. This isn't music you listen to: it's music you watch, like the lights flipping on and off in a block of apartments or the intricate activity of a beehive. The original album has now been supplemented by the addition of two live performances from 1980, notably a stunning 17-minute solo from the Pisa Improvisors Symposium (an occasion otherwise documented on psi 04.03/4). Improv junkie that I am, I'll confess that despite my admiration for the overdubbed stuff, the Pisa improvisation is my favourite piece on the disc, an exquisitely varied dialogue with the surrounding silence that contrasts sharply with the systematic, confrontational exclusion of silence from the overdubbed pieces."

"NEUPH was originally issued in 1978, Rutherford's third solo recording and one with a difference, employing apparent prior composition, euphonium, multi-tracking and even a tape played at double the recorded speed. While there's a certain current orthodoxy that resists this kind of manipulation, it seems very close here to some central issues in solo improvised music, which is often about becoming plural and a corresponding struggle with time - hence, Rutherford's work has an essential kinship with the great solo projects of our time, including the contrapuntal density of Taylor, the multiphonics of Parker, the discontinuities of Bailey and the compound perspectives of Braxton. In part it's about learning to listen through the process, repositing the 'original' not in the first part recorded but in the assemblage of the music. Rutherford claims not to recall the specific processes used. Whether the works are always scored or their echoes and near-unisons are the result of close listening, these decisions or suspensions are left to the listener. The title track, for one euphonium and one trombone, is brilliant dialogue in which temporal identities never seem to arise. There is one sweetly anthropomorphic moment preserved in Paunch and Judies, in which a double-speed trombone part is joined with the howls its playback inspired in a dog. The trombone sounds trumpet-like, but the dog sounds like a trombone. It creates a context in which the rapid euphonium fingering of Chefor suggests a lowered trumpet. NEUPH comes with additional unreleased material. Here there are two solo trombone performances from Italy in 1980 that now bracket the original material. The opening one - Roman Tick - is fine, but the 17minute Pisa Ear is a masterpiece, shifting, quixotic, lyric and thoughtful, possessed of tremendous technical resource but never apparently about technique."

"NEUPH represents a rare project by Rutherford in that he is overdubbed, sometimes many times over, and on one track improvises against a playback of himself at double speed, pushing the trombones up into cornet territory. It's a fascinating experiment that anticipates some of Evan Parker's work in the same area. Chefor is a euphonium solo and a fascinating exploration of that relatively unfamiliar sonority. Another valuable reissue."