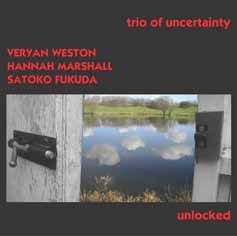 A trio for violin, cello and piano inevitably evokes a chamber music tradition far removed from free improvisation, and in fact if one were to choose a few moments at random from the music on this CD it might well be impossible to tell whether the musicians were creating spontaneously or reading notation. However, listening for more than a few seconds to any of these pieces would reveal a structure whose unfolding is clearly the result of three minds working in the moment, rather than a single mind planning in advance. Almost all the ingredients of classical (and 'modern') chamber music are there – melody, harmony, accompaniment, counterpoint, expositions and developments – but completely and naturally incorporated within an improvisational mode of composition. If I say that the music 'sounds composed', what I mean is that it sounds composed by improvisers whose alertness and sense of form is often quite startling, rather than that it sounds as if it was written down in any form.

I begin with these observations because they were the first impressions to strike my ear when listening. They form one of the fascinating aspects of this music, which isn’t to say that there aren’t many others, like the way that the bowed instruments thread themselves in and out of the piano’s equal-tempered grid, the way that the collective 'harmony' is intuitively structured so as to emphasise lines and gestures over 'chords' while seldom straying too far from the inherited sonic vocabulary of the instruments (no piano-interior or preparations, for example), and the subtly sprung rhythmical interplay between the members of the trio.

As Evan Parker puts it, All improvisation from an instrumentalist is in a sense 'prepared' improvisation since the given knowledge of instrument and instrumental technique inevitably have an influence on the approach to and the course taken – and this preparation is certainly evident in the fluent virtuosity with which all three players approach the project, although what is truly special about it is the spontaneity with which their imaginations, held back by no technical limitations, coalesce and separate, interweave and interject, with the musical momentum constantly thrown from one player to another to produce 'chamber music' in the truest and most contemporary sense.

"Violinist Satoko Fukuda, cellist Hannah Marshall, and pianist Veryan Weston all have extensive classical training - no surprise, give the history of their instruments. As the Trio of Uncertainty, their like-minded backgrounds allow them a remarkable sense of ensemble, which in this case translates into an acute alertness to compositional parameters - that is, an intuitive reaction to what the others are doing at any given moment intended to provide a balance of parts, flexibility of foreground/accompaniment, a cohesive flow of details, and a sustained architecture - which is all the more impressive because the process is improvised. The ten pieces display a nearly telepathic level of collaborative agreement, using classical materials (atonal, or bitingly chromatic, harmonic frameworks; supportive, non-pulse-generated rhythmic features; sequenced or asymmetrical melodic patterns) and an instrumentally-derived quality of detail. For example, Unlocked is built upon a slashing string attack, with percussives and glisses adding to the intensity, For This Were a Dream offers melodic passages with sympathetic piano accompaniment, and Lost Ballad & Antidote is a spontaneous song of substance and structural integrity. This is improvised chamber music that remains focused and lucid even at its most intense. When in the 1950s Gunther Schuller bemoaned the fact that he couldn't find musicians able to improvise fluently in an atonal setting, he was thinking of performers like these."

"Piano, cello and violin constitute the building blocks of countless chamber music ensembles through the ages. Within that tall shadow of history, the chosen name of the trio of Satoko Fukuda, Hannah Marshall and Veryan Weston stands in wry contrast. Weston's been limning the borderlands between classical and free improv piano for decades with an approach that draws liberally on the customs of both zones. Fukuda and Marshall are far younger in years but more than able to meet him on even ground as conservatory-trained musicians versed in various improv friendly settings. Visited in fragments, much of their interplay here appears to carry the structure and symmetry of carefully considered composition. Fukuda's violin, in particular, exemplifies a command of pitch and placement that suggest innate talent coupled to countless hours of practice. Marshall's cello is just a horsehair's breadth behind, her bow work matching that of her pizzicato for humming bird speed. Weston explicitly avoids tampering with his instrument's innards, working his keys and pedals in a surprisingly straightforward fashion while still accessing liberal caches of dissonance when called for.

The disc's ten tracks all come from the same session with dry detailed acoustics that enhance the natural resonance of the scraped, plucked and pounded strings without distorting them. Sequenced as they are, the pieces almost sound like sheaf book of variations on a single hive-like theme, feeding one into the next while retaining individual identity. Passages of choppy incremental activity alternate with sections devoted to more conventional compass points of melody, harmony and rhythm. The communication is close and constant, sometimes leading to claustrophobic overlaps, but more often yielding a marvellous telegraphing of ideas with spatial considerations preserved intact. It makes picking out and speaking to minute specifics both challenging and ultimately counterproductive. What's most pleasingly confounding though is how often the three musicians precipitate each other's intentions under split second conditions. Even within the top echelon ranks of improv where this sort of thing is old hat, it's still a thrilling experience to encounter. With this stimulating body of music, Weston, Marshall and Fukuda bring ample truth to the adage that a given instrumentation is only as outmoded as the players who opt to ply it."

"From overt gestures to subtle nuances (the myriad of striking asides from the string duo), simply wonderful. Everyone is in top form."

"Veryan Weston, Hannah Marshall and Satoko Fukuda - known together as Trio Of Uncertainty - confirm that in improvised music, personalities override instrumental allegiance. The fact that their line up evokes one of the enduring instrumental combinations of classical tradition, the piano trio, is quickly forgotten as the three musicians build from their own obsessions. There's nothing of the jokey jazz references that pepper Weston's performances with Lol Coxhill; he's dealing with the fabric of musical material itself in the abstract here, and his playing is intellectually tough, while highly susceptible to change as he gauges the string sounds around him. In a track like Lost Ballad & Antidote, Satoko Fukuda's violin implies the conventional sing-song relationship between string player and accompanying pianist, but that certainty quickly blurs as hierarchies dissolve. More often Marshall and Fukuda probe the extremes of their instruments, a zone where violins and cellos become erratic and unpredictable. They dialogue with Weston and with their own instruments - making the uncertainty certain."

"Veryan Weston is undoubtedly among the most talented pianists around, two of his previous Emanem releases - TESSELLATIONS and TEMPERAMENT, the latter with Jon Rose - belonging in the all-time favourites in my mind's collection, not to mention the memorable duets with Phil Minton. Both cellist Hannah Marshall and violinist Satoko Fukuda were instead new names for yours truly (hold it - I now recall Marshall contributing to a recent Terry Day release) but the pleasure deriving from this meeting is tangible after having listened to UNLOCKED with the necessary attention. As Richard Barrett correctly points out introducing the album, one has a sense of 'three minds working in the moment', the tidy showcase of well-trained musicianship shown by the players throughout the ten tracks notwithstanding. There's a feeling of 'academic indiscipline' that attributes a radically independent personality to the music, despite many sections sounding like (quite atypical) modern chamber scores. The clash of Marshall and Fukuda's unyoked fantasies produces astonishing results without a trace of sensationalism in sight, the exploration of the less practiced areas of their instruments led with surefooted independence, but also with the aerials raised in search of an intuitive homage to the spirit that will conduct these exchanges to be part of a fully developed collective expressiveness. Speaking of which, Weston counterbalances the younger companions with his customary shimmering dexterity, droplets of digital forwardness and splintered melancholic reminiscences the glue of an ever-present reciprocal artistic partisanship. Thus, the violin/cello/piano formula becomes a winner, ideally fusing distant worlds into a single microcosm - lasting about one hour - whose pulsating energy and flexible aesthetic are enough to justify enthusiastic reactions."

"This disc is haunting and lyrical, with some exquisite counterpoint and dynamics. For a player with such a density of ideas, Weston has always struck me as particularly bouncy and effervescent, an apparent contrast marvelously built in to his approach. Such an amazing listener, too, giving tons of space to the young Fukuda. The group language is intense, with racing triple helixes here, limpid pools there, and occasional moments of somberness like those hear in a Bartok small group. Marshall is amazingly resourceful, gntty and bustling where necessary but elsewhere keening, weeping (For This Were a Dream). Perhaps the best music on the disc is the melange of dizzying glisses and washes of noise on the closing Periodic Questioning. This is a superb entry from Emanem, appealing to fans of bassist Kent Carter's recent discs for the label."

"Certainly it will be the unadorned sound of the trio plus their musical syntax that immediately strikes listeners, and which has the most effect on their reaction to the music. This sounds like a trio playing some mutant form of chamber music, which indeed it is. There are frequent passages on which the three could be playing a contemporary composition rather than improvising. Largely, this is due to Satoko Fukada's classically trained violin. So, on For This Were A Dream she draws forth a flowing mournful melody, replete with glissandi, while pianist Veryan Weston and cellist Hannah Marshall effectively fall into the role of accompanists. Lost Ballad & Antidote begins in a similar vein; however — crucially — midway through it morphs into an equal three-way exchange that ebbs and flows before boiling up into a climax that could be nothing but improvised.

Indeed, once one gets beyond the surface sound of the trio, the music reveals all the pleasures of great improv; the lightning-fast reflex exchanges on the all-too-brief Hypnogogia contrast with the far longer Unhinged, where ideas unfold at a more deliberate (even stately) pace before accelerating to a series of rapid exchanges followed by a moving funereal finale.

Throughout, the common features are the compatibility and empathy of the players, combined with a steady flow of ideas between them. The CD's front cover photo shows a peeling door that is unbolted and ajar, revealing a dreamlike pastoral landscape beyond, which features cotton wool clouds reflected in the tranquil surface of a river. Somehow, very fitting to the mood conjured up by the music."