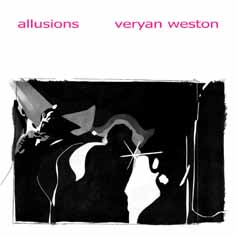 This concert took place as the last part of a cycle organised in Bordeaux by Musique Ouverte. It included a lecture by Veryan Weston about the concept and process of Tesselations (May 14th), followed the next day (May 15th) by the performance of Tessellations at the Science College of Bordeaux University, concluding the following day with this series of improvisations on a Bösendorfer grand piano in the lounge of the main bookshop in Bordeaux, Mollat.

Most of the Mollat freely improvised solo concert is heard on this CD. Only the penultimate piece of the recital has been omitted for reasons of space; otherwise all the music is presented unedited in the order of performance. I have known this wonderful music for several years now, and have wanted to issue it, but other projects involving the pianist in group settings kept coming up.

The music on this CD follows on from his 1993 recording PLAYING ALONE (Acta 9) in that it is basically stream of consciousness improvising. It is mostly a leap forward from the earlier album, but there are also some fond looks backwards. (The other two solo albums, UNDERWATER CAROL on Matchless MR LP 12 from 1986 and the 2003 Brussels version of TESSELLATIONS on Emanem 4095, feature improvisation based on predetermined frameworks.)

One can hear the influence of the two major pianists of the 1960s – both the spaciousness of Paul Bley and the density of Cecil Taylor. But one can also hear that composer pianists have also been listened to, most notably Béla Bartók and, above all, Conlon Nancarrow, who used piano rolls to create music not playable by mere mortals. This is not to suggest that Weston is a plagiarist. After all, if you listen to 1930s recordings by James P Johnson and Lester Young among others, you will hear several of the elements that became part of the unique original style of Thelonious Monk (another favourite of Weston as witness the several references to his tunes in this recital).

Out of all these influences, Weston has long found his own voice, in a style that is administered strictly through the keyboard and pedals. His improvising ranges from somewhat isolated pecks at the keyboard (a gambit Weston uses elsewhere to get into situations dominated by instruments that can slide between the notes) to involved passages that sound impossible for one pianist to play. There are times when his left and right hands sound like fairly unrelated entities, as if there was a duet going on.

Some listeners may be drawn initially to the fragments of well-known tunes that appear every so often. However, the substance of this music is the free improvisation that is not based on any pre-set ‘structures’. Every so often a tune from the jazz age does creep in, mostly very briefly – akin to quotes in jazz improvisations by the likes of Dexter Gordon.

I generally do not like the mixture of tunes and free improvisation, especially when they are juxtaposed like oil and water, possibly in the hope of appealing to more listeners. Weston’s forays into the familiar come organically out of his explorations, and are used in enough moderation not to detract from his lines of thought.

It’s now over thirty years since Weston first appeared on record (with Lol Coxhill). Since then, he has continued to get better and better, so that he is now one of the major musicians in the world of free improvisation (and the neighbouring areas he also works in). Over twenty years ago, the notes on his first solo record stated that: 'Veryan Weston is a pianist whose reputation has yet to match his talent. That’s still true, even though both his reputation and talent have grown considerably.

"It's amazing to me that Veryan Weston is not better known."

"Due to a number of successful partnerships with the likes of Lol Coxhill, Jon Rose, Trevor Watts, and Phil Minton, among others, Weston has the reputation of a versatile and fluent accompanist and foil – a team player with quick reflexes and a broad stylistic acumen. Though not his first solo recital, ALLUSIONS may be the one that displays his sensitive balance of considered detail and circuitous structure to best advantage. There’s a cool, confident lyricism to the seven extended pieces here; the music falls under his hands as if prearranged, expanding and contracting in a seamless sequence of episodes that sustain forward motion as they elude predictable resolutions. His sinuous chromatic harmonic palette and carefully plotted pace sometimes give the remarkable impression of what it might sound like if Mal Waldron played Bartok, but there’s no hint of mimicry. As if to dispel such notions, he shrewdly makes use of dramatic contrasts throughout the program – the zig-zaging melodic impetus of Prelude to a Prelude, tightly patterned strategies in Out of the Mood, the delicately shaped chords introducing Hints of Habits that gradually expose sharp edges and taut phrasing. In fact, Weston’s formal logic is so deft and decisive that the album’s title seems like a bit of an overstatement, or an afterthought; the emergence of Over the Rainbow at the conclusion of Getting Somewhere and the use of Smoke Gets in Your Eyes as material for emotional or thematic variation in Prelude and Fug are atypical, temporary diversions. The lasting qualities here derive from the breadth of Weston’s own improvisational resources."

"Veryan Weston is both a peerless virtuoso, his uncontaminated figurations and innovative intuitions difficult to compare with anyone else’s, and a shamefully overlooked pianist when the stupid games of name-throwing begin. ALLUSIONS may be used as a toe-dipper for the unversed despite its specific character, nearer to pure ad-libbing than previous records by the same artist which were based on prearranged structures, such as the unforgettable TESSELLATIONS. This is one of those items who should hypothetically open many people’s eyes about the fact that the planet with 88 keys is not exclusively revolving around Köln: there are also musicians whose intellect features a couple of supplementary gears.

The problem, perhaps, lies in how the general audience might react to the use of those 'supplementary gears': the wonderful decentralizations of chords, the self-reliance of Weston’s fingers as opposed to the pre-digested concepts which several presumed masters punch the clock of our tolerance with, and the now inert, now furious dynamics succeeding minute in, minute out could easily push back someone who approaches a solo piano effort with the disinterested attitude of a cretin, that kind of yes-I-know-what-it-is-ism which prevents knowledge and experience from depositing even a few seeds of curiosity in the mind of a human being.

Over the course of these seven tracks, we’re marvellously attended by a realistically down-to-earth, yet hypercritically incorruptible creativity. This music appears in gushes and trickles, nearly materializing in ever-multiplying figures in front of the listener for barely a handful of seconds; then it goes straight to the archive of generic recollection, the place where a record is filed as a 'colour' rather than effectively committed to memory. It leaves an indelible mark, yet there’s not a single fraction – except maybe for the short citation of Somewhere Over The Rainbow – which we’ll be able to literally recall. However, consider yourselves stone-hearted if you’re not moved by the wondrous harmonic passages in the final section of Traces Of Nuts.

ALLUSIONS is a fundamental addition to any creditable collection, in the hope that its originator finally receives the accolades he’s been deserving for decades by a larger social segment. "

"For years, pianist Veryan Weston has been a stalwart of Emanem, in a variety of contexts including duos, trios and quartets - most recently with the fine quartet CAETITU.

ALLUSIONS was played on a Bosendorfer grand piano and was freely improvised, not based on predetermined frameworks. As a solo album, it is close in approach to Weston's PLAYING ALONE (Acta 9), having a similarly freewheeling creativity. However, the most intriguing aspect of ALLUSIONS, and one that makes it distinctive, is hinted at in its title; throughout, Weston makes occasional passing references to well-known tunes or the work of other pianists. This gives the pieces a flavour that is more akin to jazz soloing than to free improvisation, although that boundary becomes rather blurry here. Crucially, those passing references are mainly fleeting, leaving the listener with a disquieting sense of déjà vu.

Tellingly, in the sleeve notes to PLAYING ALONE, Weston commented, 'Structures are the foundations from which I work. Building these spontaneously enables me to express a variety of emotions which are a central reason for me to play.' His playing here demonstrates that to be as true as ever. Whether referencing others' tunes or building his own, he creates structures that have an irresistible logic without dominating the music, and which do enable him to express a variety of emotions. Thirty years after his first recording, Veryan Weston is as fresh and inventive as ever; he goes from strength to strength."

"The problem with free improvisers including chunks of idiomatic material in otherwise abstract performances is that these can end up feeling either like knowing skits, or else like little rewards to the listener for wading through the surrounding thickets of dissonance, like oases plopped into the middle of the desert. When pianist Veryan Weston does this during his new solo recital, though, you're hardly likely to relax even when you do stumble upon a familiar melody. Sure, it's fun playing spot-the-tune, sometimes with an assist from the punning track titles (Into a Mood/Out of the Mood includes a sidelong view of Monk's Mood, Prelude and Fug is a fantasia on Smoke Gets in your Eyes), but his take on this material is as shrewdly inquisitive as any of his slippery freeform playing. Take that Monk tune, for instance: Weston fastens onto the discrete gestures within it – the ear-stretching arch of its opening phrase, the long passages of chromatic downwards drift and upwards screw-tightening – then swirls them delicately into each other, the tune's logical consecutive question-and-answer phrases blurring into layers of internal commentary. Somehow the melody remains oddly inviolable however much he knocks the literal notes off-course.

This is music that never seems to be simply fast or slow, dense or sparse; rather, its rhythm is twofold, taking its pace from the way thought can act as a drag on the fingers or jump ahead of it, or the two can rush together in tandem – there's a beautiful example of him shifting between all three modes in Traces of Nuts – and Weston has a special love of textures that suggest a fugue where the parts have gotten a bit out of whack. It's often dazzling music – Prelude and Fug and Getting Somewhere are astonishing performances, in particular, the latter turning Salt Peanuts into a lightning Bartókian dance and ending with Over the Rainbow emerging from a mushroom-cloud – but never forbidding in its virtuosity. Not a wasted note, either."