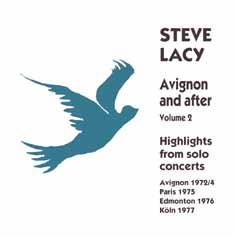 This CD is made up of previously unissued highlights from some of Steve Lacy’s solo concerts in the 1970s. Rather than go for complete concerts, I have decided to select performances that are relatively rare compositions and/or very fine renditions, and which therefore add something to those already published. The sound is somewhat variable due to differences in the five recording techniques as well as to the varied acoustics of the four spaces. In some cases this has meant the inevitable compromise between removing hiss and hum and leaving the music intact.

Highlights of his two very first solo concerts, dating from Avignon in 1972, were the main part of Volume 1 (Emanem 5023). That selection did not use the first items performed on both days, the three Billy Strayhorn pieces, JOHNNY COME LATELY, LUSH LIFE and UPPER MANHATTAN MEDICAL GROUP (UMMG). These may not be the most profound performances, but they are very nice to hear. As far as I know, there are no other records of Lacy playing these tunes, except for JOHNNY COME LATELY with Cecil Taylor at the 1957 Newport festival (Verve), and with Mal Waldron in 1986 (Soul Note) and 1993 (Slam).

We were present when Lacy returned to the Avignon theatre after a gap of two years. The first two chosen highlights pre-date other published versions of these tunes. Irene Aebi tells me that MOMS and POPS (which became the first two parts of the SHOTS cycle) were as much about Steve’s parents as hers. THE DUMPS, inspired by Jelly Roll Morton, was first performed solo at the first 1972 Avignon concert, but this 1974 version is better both musically and sound-wise.

The Paris concert of the following year contained a variety of music. The rarity, SLABS, dedicated to the 1930s British dance band leader Lew Stone, is making its first appearance on record. THE WOOL was only previously available on the 1972 Avignon concert heard on Volume 1. This performance is similar, except that the improvised middle goes off in a different direction, so it seems sensible to double the number of performances on record. The second half of both this concert and the 1974 Avignon one featured the whole CLANGS cycle, but neither performance came up to the overall level of the slightly earlier Berlin one heard on Volume 1. However, the Paris version of TORMENTS is even noisier and more misterioso than any other version I’ve heard, so it is included here. THE MOMA DUCK was the final item in the concert. There have been so many solo and group versions published, but this must surely be the contender for the best.

In 1976, I co-ordinated Lacy’s first solo tour of North America comprising a concert in New York City (released as SNIPS on Jazz Magnet) followed by about six concerts in Canadian cities. Of these, he considered the best music and recording to be from Montreal (released as HOOKY on Emanem 4042). In between these two dates, one of the places he performed at was Edmonton from whence came an unusual version of COASTLINE, and a fine HOOKY - a piece that only appears to have been perfomed on this North American tour.

Finally, there is a definitive version of SNIPS from a solo recital which was the very first concert held at Walter Zimmerman’s Beginner Studio in Köln. Being dedicted to Billy Strayhorn, this piece neatly, although accidentally, makes an apt end to this collection.

"I think the Lacy solo is an essential addition to his solo recordings and certainly one of the best. A great job of editing and sequencing, not to mention the sound quality."

"In contrast to the first volume's two dates and concert locations, the thirteen previously-unreleased tracks here originate from five separate solo concert venues between August 1972 and December 1977. In compiling the album, Emanem proprietor Martin Davidson says he 'decided to select performances that are relatively rare compositions and/or very fine renditions, and which therefore add something to those already published.' Right from the start of the album, the music supports that statement. Surprisingly, the first three tracks originate from Lacy's 1972 Avignon concerts, which seemed to have been fully documented by Volume 1. They are all versions of well-known Billy Strayhorn compositions which were used as openers to the two concerts and are relatively brief, the longest clocking in at just over three minutes. Lacy plays them straight, stating their familiar themes then subtly exploring them as if in appreciation. Taken together, as a nine-minute suite, they hang together well as a tribute to Strayhorn and make a fine start to the album.

The transition to three 1974 recordings from Avignon is seamless, despite the compositions being by Lacy himself, not Strayhorn. The saxophonist's approach is similar on Moms and Pops as he repeats their melodic themes and explores them without straying too far. His tone and rhythmic sureness of touch are a joy to hear, and they carry the listener along in a way that feels irresistibly natural and logical. The Dumps, which closes the Avignon section, is joyous in a different way, a freer piece that strays further from its initial theme as Lacy goes wherever the mood takes him.

Across the album, the sound is consistently good so that there are few obvious indications that the music comes from diverse sources. In his notes, Davidson refers to 'the inevitable compromise between removing hiss and hum and leaving the music intact.' Despite that, he has done a fine job in cleaning up the sound, and no distracting noises are in evidence. However, the differing recording techniques used and acoustic properties of the original spaces did create differences of sound, so the shifts of scene to Paris 1975, Edmonton 1976 and Köln 1977 are detectable, but not intrusive.

Such considerations pale into insignificance compared to the wealth of music that this album contains; each of its thirteen tracks is a gem. Right at the centre of the album sits Slabs, making its recorded debut here. Alone, it more than makes the album irresistible; featuring a typically engaging theme from Lacy, it is made special by the saxophonist engaging in a call-and-response duet with himself between two registers of his sax playing contrasting phrases. Stunningly simple but simply stunning — an apt description of the entire album, too. Fingers crossed that there is still enough left for a third volume."

"Variable sound quality, invariable musical quality. These are all very strong performances. Three tunes by Billy Strayhorn, bouncy renditions of Moms and Pops, a gorgeous Hooky, a very worthwhile 11-minute Snips. Lyricism and precision: Lacy truly was in a league of his own. "