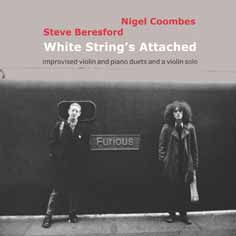 4 & the last third of 3 are previously unissued.
The rest was originally issued in 1980 as Bead LP 16 (with wrong timings).

Steve Beresford and I first played as a duo at what was meant to be a Four Pullovers concert. The combination of piano and violin might appear to be an obvious one, but this is not the case. In the early concerts, it never occurred to us for Steve to use a piano instead of his objects, and when finally he did use the instrument we did not consider the fact that composers from Haydn onwards had immense difficulty with the medium. Beethoven went through such traumas at trying to make the instruments blend, marrying the percussive sounds of the piano with the singing qualities of the violin, that he gave up after only ten sonatas. Countless composers have tried since to contrive some kind of homogeneity out of the instruments only to prove that the combination is immitigable.

This, I think, explains why the two instruments on this record sound as if they hate each other. For us to try and surmount Beethoven's problems, for example, in the heat of trying to make the music up as we go along is almost laughable. Rather the music could almost be considered a depiction of his problems at trying to write his ten sonatas.

"Violinist Coombes explains things perfectly in his hilarious liner notes. Nonetheless, a blindfold test of this record to a knowledgeable listener often results in the music being misidentified as, say, a composition by Charles Ives, and rarely as an improvised piece. By the time of this recording, these players had been working together in a variety of contexts and could almost read each other's thoughts, though with music this demented that might not be a good idea.

Coombes was a striking figure in this era; a slight, lean Englishman with an  Angela Davis-type Afro, who was often clad in a dark duster. He would play on and on, often sounding like a collection of classical violin records being run through a cherry stoner. These duets are, above all, truly enjoyable to listen to. The timing is uncanny, as is the sense of drama. Decisions as to when to play hardly anything and when to unleash a bucketful of notes are intelligent, and often surprising."

"Though there are some breathtaking passages of spontaneous, intuitive agreement in these violin/piano duets, the real fun is in the moments when Coombes and Beresford do their best to work against each other: a bounce of boogie-woogie cut short with a peremptory scratch of the bow, or a fragment of hillbilly fiddle rudely interrupted by a thunderous splash of the lower keys. It’s enough to create a sense of playful drama, as though the duo are accompanying a silent movie with fleeting moments of internal tension and reflection. If Coombes is occasionally drowned out, the concluding solo violin improvisation gives him more room to clarify his ideas: unfurling a scintillating multi-string drone, which quickens into nimble, fugue-like figures suggesting two or three pairs of hands at work, and ascending to temporary plateaus with a hair-raising attitude of recklessness."

"Mr Spicer is correct in saying that 'Coombes is occasionally drowned out', but wrong in attributing this to David Toop & Max Eastley's (very good) recording (on cassette). It is, in fact, because of my deliberate but inexplicable very loud bits, for which I apologise."

STEVE BERESFORD - letter to THE WIRE 2014

"The pairing of violinist Nigel Coombes and multi-instrumentalist Steve Beresford was a fortuitous one, and while their work may not pop out in the pantheon of free duets, it’s damn impressive. WHITE STRING’S ATTACHED was initially released in 1980 on the Bead label, England’s home for younger free improvisers at their most unhinged, and presents Beresford and Coombes in a robust, tangled dance across three duets, all taped at London Musicians’ Collective concerts. The disc also includes a riveting and previously unreleased violin solo that would give Paul Zukofsky a run for his money. While these musicians may be noted more for their subversive tactics and diffuseness, the music here is built on energy and invention.

The bulk of their tango is rooted in the violin-piano chamber tradition, though Beresford does bring his bag of noisemakers to the proceedings for a few stretches. It’s actually somewhat rare to hear unfettered pianism in Beresford’s arsenal; his approach certainly echoes Misha Mengelberg in its poised playfulness, though perhaps less Monkish. Amid surprisingly dense runs there are snatches of whorled gospel and township majesty that quickly elide into parlour grace, not quite subsumed beneath Coombes’ bony scrabble. Though the means of recording seem minimal and lo-fi, Beresford’s explosive invention and the sub-tonal detail of Coombes’ finger-work are never lost – in fact, the documentary cassette recording enhances the raw surge and wry telepathy of this music. And while the notes suggest an upending of staid classicism, WHITE STRING’S ATTACHED is bluesy in its devilishness, a programme caught between folksy communication and volcanic gesture with passing glances at Romantic volume and 20th century art song. In a maddening, sweaty dance, Coombes and Beresford lock arms with humour, grace and weight, and created an extraordinary record in the process."

"British humour is at once popular and perplexing to American audiences: downright silly one in one instance, too subtle to get a handle on in the next. Particular to players around the London Musicians Collective has been an additional self-effacing quality that can make parsing their work (and their statements about their work) difficult. All of which is to say that while WHITE STRING'S ATTACHED is one of the finer examples of improvised music reaching a composed and so-called 'classical' level of formality and (perhaps) highbrowicity, the musicians aren't taking it all dreadfully seriously.

So what disasters await within the 70 or so minutes of WHITE STRING'S ATTACHED? There is certainly a fair amount of classicism to be found: Brahmsian posturings, Copelandesque reveries and (as Chadbourne points out) dissonances reminiscent of Ives all rise to the surface. But as was common practice among British free improvisers in the '70s and '80s, such moments of musicality don't have long to live. There are the frenzied outbursts common to playing without a rudder (the spontaneous combustion inherent to spontaneous composition), but such moments are kept to a minimum. There is also more than the usual allotment of sublime discovery. While the strategies may be familiar, this is not all cheeky pastiche. The abstract rewards are of the highest order.

The disc also includes, quite notably, a wonderful 12 minute violin solo. The Emanem release restores the second half of the third take (that Beresford supplying some especially disarming noise was cut from the original LP issue is itself a bit hilarious) and adds the Coombes solo as the final cut. It is a fairly staggering performance and an opportunity to listen closely to an under appreciated and seriously hilarious musician."