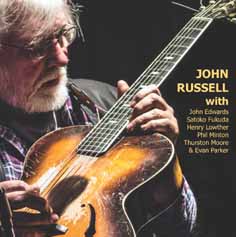 Introduction to the 60th birthday gig.

On approaching my sixtieth birthday and how to celebrate the fact I had made it that far I realised that I have been deeply fortunate in having had the opportunity to play with some great musicians over the years. It is this thing of ‘with’ - playing together in a spirit of shared generosity that is at the heart of free improvisation for me. It seemed natural then that the best way to celebrate would be to play a concert with some of these musicians.

One can tell from the music, the announcements and the applause that this was a very enjoyable occasion. To get virtually all the music – less than half a minute has been edited out – onto a CD, the announcements and applause had to be left off. The relevent parts of John Russell’s announcements are interspersed in these notes in italics. (The opening comment above was written after the concert.) To hear applause, you will have to supply it in the privacy of your own home.

John was off the scene for several months prior to this gig, mainly in hospital under observation for a serious heart condition, but he was determined to play this birthday concert..

I guess quite a lot of you know about my health condition. I was diagnosed with three blocked arteries and a third of my heart working. I go in for a quadruple bypass on January 29th, which means I can play my 60th birthday concert, which is great. [Loud cheer from audience.]

You do not have to take this into account – his playing is up to his usual high standards.

I was playing in a duo with Henry Lowther on trumpet, and I also had a duo with Satoko Fakuda on violin, and I thought, 'wouldn’t those two sound great together in a trio', and they do.

Henry Lowther has spent most of his time playing in fairly conventional jazz bands. However, it should not be forgotten that he was playing free improvisation in the early 1960s with the trio of Russell Hardy, Terry Holman and Terry Day. Satoko Fukuda moved from Japan to England as a child in order to study 'classical' violin. She subsequently became involved in free improvisation (thanks largely to Gus Garside) and now performs in both worlds, and several in-between.

I play in the company of such fantastic musicians. When I was a teenager, it was the time of the British blues groups and stuff like that, and I’d listen to Henry playing with John Mayall, and I’d be trying to copy Eric Clapton licks.

The second half of the first half – with Phil Minton.

Phil I first met playing in a group in Germany, which was one of Günter Christmann’s VARIO groups. I played in quite a few of those groups, and Günter Christmann is a remarkable musician who is very … what can I say? … all those very cliched words like unique, original, etc. Günter’s got it in spades – he’s great, and not only that, he introduced me to Phil for the first time, which was wonderful. And since then we’ve been having various adventures on the planet – all sorts of things – touring around. Our last adventure was in Germany at the beginning of the year, when I was a little bit out of breath, and Phil said I should go and see a doctor. I didn’t, of course ... but I have now.

I first heard this duo around 1989 and was bowled over by it. I’ve heard it several times since then, but for various reasons never made enough good recordings for a complete CD – a situation that needs to be rectified as this performance shows.

The first half of the second half – with Evan Parker and John Edwards.

I first met Evan Parker, in the mists of antiquity right back in the days of the Little Theatre Club, where I was playing my first foray into improvised music, which was playing with Dave Solomon. And you can hear a track called 'Low-Fi' which was recorded on a tape recorder that you carried around and recorded things with. We had a duo there, and through John Stevens and the Little Theatre Club I met Evan who actually knew my partner Joanna from his time in Birmingham, so we have a connection that runs back a long time. Evan’s been a good friend over the years, as he calls it, through thin and thinner. We played in various groups and one of them is this trio with John Edwards, who’s a wonderful bass player.

I heard the first gig by this trio, which must have been about ten years ago, and I’ve heard as many as possible since, and they have all been sensationally good. It’s one of those bands of which I never tire, especially as all three are such great group players as well as soloists.

Thurston seems to have been spending quite a lot of time in London in recent years, as well as playing quite a bit of free improvisation. John enjoys duos with other guitarists – I remember one in 1975 with Roger Smith, and he has dueted with Pascal Marzan in more recent times (hear TRANSLATIONS).

A few years ago Evan Parker came to my house and saw that I have an electric guitar and asked me to play in his Electro-Acoustic large ensemble. I sort of dithered. I said I’ve got an electric guitar, but I don’t really know what I’m doing with it. Eventually I said 'Can I use a fuzz-box?'. And Evan sent me an email back saying 'Fuzz-box main reason for life.' That’s all the email said. So then I got a bit carried away, because as a teenager I always wanted a fuzz-box and a wah-wah pedal. I thought 'Damn it, I’m going to get one.' So I did.

Closing speech – after being presented with a birthday cake and blowing out the candles.

I first came into this music at the age of sixteen or seventeen. The first gig I saw was the London Jazz Composers Orchestra at Ronnie Scott’s. There I met Derek Bailey, who I went to for guitar lessons in conventional technique, because he was a session musician, a dance band player and all that. I needed to learn a bit more than the licks I’d got from Eric Clapton and all of those other people, and he was an ideal person to learn those things from. He was in the Russ Conway Trio for instance, and things like this. At the same time I saw Evan Parker play an amazing solo on tenor saxophone, and I quote that quite often, because I was living in the countryside, and you’d read about stuff in Melody Maker, and you could go to the local record shop and order these things, which you couldn’t do now because it was all from main distributors. So you could get the records, and that was intriguing, but when you saw it live it was engaging, and that solo from Evan really engaged me.

At the same gig I met a guy called Robin Musgrove who was having lessons from John Stevens. Through Robin I met Dave Solomon, and went to my first gig at the Little Theatre Club. And since than I’ve concentrated on free improvised music. One of the rare characteristics about this music is that the audience is discovering the music at the same time as the musicians playing it. We are not here saying 'This is what the music is', we’re letting it it tell us what it is, we‘re discovering it. It’s a revelatory experience which we share with the audience at the time it’s happening, and I’d like to thank you all for sharing that experience this evening.

I had a ball and Joanna said she hadn’t seen me so happy for weeks. I was so pleased I could do it and also that she saw and liked it. It can be very difficult to explain what these things mean but music is what I do and is part of my being. I put 'music' down as my religion when I registered for the hospital and for me it does go beyond the rational in that it is a universal, all-encompassing presence in my life.

After hearing and seeing this concert posted on YouTube by Helen Petts, I couldn’t but help make it available for general release.

John eventually had his operation mid-March, and is now well on the road to recovery – planning to return to playing in public at the Mopomoso gig in May.

"Guitarist John Russell (born 1954) has been a central figure in the 'second generation' of English free improvisers. If the first generation (e.g., AMM, John Stevens, Evan Parker, Derek Bailey) characteristically began with an orientation to jazz and worked to define its own idiom apart from it, the second generation (among them pianist Steve Beresford and saxophonist John Butcher) came from heterodox backgrounds (rock, folk or classical), while their music often had a ferocious abstraction, closer to the impossible ideal of Bailey's 'non-idiomatic' music.

The 60th birthday is a celebration arranged by Russell. There are four pieces, each played by a different duo or trio with Russell. Each group explores different methods of construction and response, notions of generational and idiomatic consistency giving way to a theme park of musical discourses. Trumpeter Henry Lowther's brings conventionally 'good' trumpet tone and heightened linear development to a trio that is almost 'classical' in its results, fed by the Berg and Bartok-flavoured violin of Sakoto Fukuda and Russell's Webern-esque (in context) skitterings. A duet with the verbi-vocal genius Phil Minton wanders from sound to song and talk, all complemented and extended by Russell's transformations of folk idioms. The second half begins with the 'working' trio of saxophonist Evan Parker and bassist John Edwards, a group with tremendous free jazz momentum in which Russell generates a density of material that could be associated with a piano or a drum kit. The ultimate performance is a duet for electric guitars with Russell and Thurston Moore, both in full distortion mode, creating whole music out of feedback and pedal effects. The concert celebrates more than one musician's achievement: it signals the creative range of free improvisation."