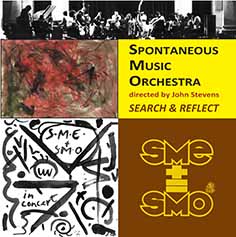 In 1973, John Stevens and Trevor Watts were performing regularly at the Little Theatre Club, in central London, as the (then duo) Spontaneous Music Ensemble, and with a larger free improvising group, called Free Space, an example of which can be heard on Emanem 5014. They were also directing weekly workshops in both east London (Bethnal Green) and west London (Ealing). They asked the workshop members to come to the Theatre Club as well, and all these elements combined to become the Spontaneous Music Orchestra.

As I remember, there were usually between twenty to thirty people involved. However, the first piece on the first CD seems to be by a smaller number, while the last seems to involve more. Unfortunately, I did not keep a record of who was involved. Some participants have continued to perform in the London improvisation scene, whilst others left for one reason or another. Among those definitely participating in some if not all of the 1973 pieces were Nigel Coombes (violin), Brian Eley (voice), Herman Hauge (alto saxophone), Ron Herman (double bass), Marc Meggido (double bass), Simon Mortimer (piano), John Russell (electric guitar), Paul Shearsmith (cornet), Dave Solomon (percussion), Larry Stabbins (saxophone), John Stevens (cornet), Trevor Watts (soprano saxophone), and multi-instrumentalists Dave Panton and Chris Turner.

Stevens had been experimenting with large improvisation ensembles for several years, and was always looking for different ways to organise them. His concepts were often more interesting than the end results, but what I have chosen here are performances that I, as a listener, find both interesting and enjoyable. The first piece came out of silence and returned there, with Stevens asking the musicians to continuously relate to the silence. The music is a good example of the SME approach to improvising, with everyone relating to each other while leaving enough space for everyone else.

One of Stevens’ most basic devices was the Sustained Piece, in which everyone sustains a note for as long as they can breathe out, pauses to breathe in, and then sustains again, and continues that way. Two examples are heard here, one instrumental and one vocal. On the first attempt that evening (not heard here) everyone played loudly. Stevens soon terminated this, pointing out that not everyone could be heard when everyone played loudly. Everyone can be heard on the two subsequent, slowly-evolving, drones included here. The vocal one is faded just before the entry of non-sustained instruments that completely changed its character.

One-Two is the piece on this CD that sounds most like a workshop exercise. It is similar to the duo piece Flower, the mainstay of SME performances around that time, based on a fixed beat. Alternating beats are designated ‘one’ and ‘two’. Performers can choose to play on one or the other. They can decide to stop playing on ‘their’ beat and start on the other, or they can drop out of this sequence for a while and play sustained notes. Each beat is thus played by an unpredictable combination of instruments, giving it a decidedly surprising aspect. This performance is faded where it started to evolve into another piece.

The instructions for Mouthpiece were for everyone to start with non-vocal mouth sounds, then to migrate in their own time to vocal sounds, and finally to instruments. The opening minutes feature some remarkable textures from the large group. The ensuing instrumental section becomes an all-out blast for a while (the only one on these CDs), but then calms down to produce some more wonderful textures before the opening sequence is loosely reversed to produce an unexpected ending.

The 1975 St John’s Smith Square concert was designed to present two aspects of John Stevens’ music. The first half featured the John Stevens Dance Orchestra - a jazz-oriented medium-sized band. The second half (heard here) featured the more radical world of the Spontaneous Music Ensemble and Orchestra.

For this performance, John Stevens selected 10 musicians (including himself) to be the Spontaneous Music Ensemble. All were musicians he had been working closely with in the recent past, except for Jane Robertson who was visiting London at the time. To turn this into the Spontaneous Music Orchestra, Stevens added 11 of his current workshop musicians. (Note that Lindsay Cooper was the male string player, not to be confused with the female wind instrumentalist of the same name.)

The music was designed to be performed by musicians of varying abilities. It commences with just the workshop musicians playing Search & Reflect – one of Stevens’ basic concepts, designed to make musicians listen and react to each other. After about 5½ minutes (index 2), the other, more experienced, musicians joined in playing long notes, and the piece evolved into a Sustained section. The music continues this way, with freer improvisations emerging from time to time, for the next 23 minutes; Evan Parker on the left plays some very high sustained notes towards the end of this section. Around 29 minutes from the start (index 3), Trevor Watts on the right leads the music away from this semi-static state into a freely improvised final section. Stevens himself was playing both cornet and percussion (situated towards the back of the centre of the stage), whereas he only used cornet on the other performances contained on these CDs.

The 1981 concert featured the SMO performing Triangle, one of Stevens’ didactic works that appeared in his SEARCH & REFLECT manual. The basic version of this piece has three musicians seated in a triangle, each listening and responding to the other two as a stereo pair, and using their own instrument semiconsciously to provide a sound source for the other two. The extended version of this piece, heard here, has a triangle of triangles (nine musicians), in which one expands from listening to one’s own triangle to listening to the other two triangles, and thence on to a free group improvisation. The other orchestra track is an extract from Static, a variant of Stevens’ earlier Sustained Piece.

These CDs capture more of the many and varied aspects of the late John Stevens’ legacy, with his remarkable and fruitful conception of group improvisation.

Note: to fit these performances onto two CDs, two items from previous issues were omitted – a relatively undistinguished orchestral piece that was added to the first CD reissue of Plus Equals, and a trio performance from 1981 that was not liked by some of its performers, especially in the light of later releases. (The Newcastle trios were reissued on Emanem 5030 with much better sound.)