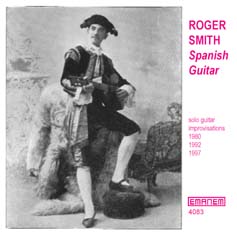 Roger Smith was one of several guitarists, initially influenced by Derek Bailey, who appeared on the free improvisation scene around 1973. (Like some of the others, he actually studied with Bailey.) Although the influence was there, he found his own voice right from the start, as can be heard on his earliest recording to be published - the 1975 performance with the Three Pullovers (now available on Emanem 4038). Around that time, he became involved in some of John Stevens' larger groups, and shortly thereafter he joined the Spontaneous Music Ensemble in which he remained until Stevens' untimely death in 1994.

By 1980, a solo album was overdue, so David Toop and Max Eastley recorded the guitarist at the Eastley's home. This was issued as the first LP on the London Musicians Collective label. The original album was presented as having four tracks - A, B, C & D. With hindsight, and better editing facilities, the two longer tracks can both be seen to contain several pieces, which were separated by silences, sniffs and/or tuning up. I therefore think it is better to edit these pieces accordingly, without any loss of actual music.

The music on SPANISH GUITAR is very mature, with most of Smith’s unique characteristics in place. Those of you who know him from his later solo albums on Emanem - UNEXPECTED TURNS (4014), EXTENDED PLAYS (4032) and GREEN WOOD (4073) - will find some differences in his earlier playing as well as some familiar trade marks.

To bring this collection up to CD length, I have added some previously unissued recordings of gigs that I made in 1992 and 1997. The first comes from an evening at Rumours (run by Elton Dean) that found Smith performing with Evan Parker and John Stevens. The three played in various combinations - Rhythms for John was the guitarist's solo contribution.

The two Sin Pad excerpts were recorded in the basement of the Singapore Padang Restaurant - a venue where John Stevens organised gigs for a while. The final two Union pieces come from a venue run by Stu Butterfield. This room over a pub was excellent, except that it was overlooking a very busy road whose noise was impossible to keep out. The first chair Smith picked up had a very loud squeak, so he decided to use it, making his solo guitar just one of three sonic elements. For his second set, he plugged his guitar into a practice amplifier belonging to Steve Beresford. The resulting sound was very distorted, providing a contrast to the unamplified Spanish guitar heard elsewhere on this CD.

"The sound is rich and intimate, and Smith plays an engaging, introvert music which invites the listener to share his explorations. Smith's approach to the instrument is 'traditional' in that he uses a Spanish guitar and only plays it with his fingers, very rarely letting his attention stray from the strings to the body. Definitely one of the masterpieces among improvised records."

"Roger Smith's solo record is remarkable in several respects. He plays Spanish guitar and this only, no adornments, no accessories. Anyone who has heard him in the current SME (with John Stevens and Nigel Coombes) will not be surprised at the degree of forceful expression he wields from waves of attacking, rhythmic strumming to milder, delicate figures.

The striking quality about this record is the intensity and vulnerability displayed. The music happens in the here and now and you can hear the coiled-spring atmosphere as he builds up long solo pieces with inventive and resourceful variations in tone and colour.

He plucks, he strums, he occasionally moves to the body of the guitar for extra percussive effects which can reach frenetic levels and then he retreats to gentle musings. There is an angular grace to this music, and above all a sense of honesty."

"The guitar is left completely untreated, naked in front of the microphone. The first twelve tracks present the four pieces included on the original LMC LP; two have been split into shorter sections, as they were already appearing in the form of loose suites. The music is instantly recognisable as genuine Smith: intimate and fanciful. The difference resides in the level of abstraction. The album¹s title is not just descriptive of the instrument, it holds a program. On every corner, at every turn and twist of Smith's improvisations you may bounce into a Spanish guitar lick: feverish strumming here, an unmistakable flamenco arpeggio there, even a fugitive sequence of chords or the ghost of a melody. In short, the guitarist comes to terms with the heritage of this particular instrument, stretching it to the confines of non-idiomaticness but playfully coming back to its 'spirit'. The reissue adds 25 minutes of previously unreleased material in the form of excerpts from three live performances, each one respecting to some extent the spirit of the original album. In Union 2, the guitar is plugged in a cheap practice amplifier, just so you can see Smith is not a one-trick horse. A captivating album."

"This is an amazing collection of guitar solos done by Roger Smith over a seventeen year time period. Here we have his good taste with melodies and his skills for improvising on each moment of this recording. Here you will not find flamenco, despite the title of the album. In fact here you will find a lot of harmonies and strange odd note combinations and note placement done by this guitar master. There are many arpeggios that could sound closer to classical guitar lines or flamenco but Smith gives them a twist making them sound more atonal and making notes clash with dissonance in many places never losing control over the guitar lines. This is a showcase of the capabilities of this guitar master at different times of his musical career."

"Derek Bailey's stamp on Smith's approach was more pronounced in 1980, but, taken together with his later Emanem recordings, this reissue confirms Smith's development out of prolonged personal immersion in the acoustic character of his instrument. Tones from nylon strings don't linger long. Smith makes intriguing transitions and sustains momentum with agility."

"While listening to this disc, the casual observer might think of Derek Bailey (his onetime teacher), which would be off the mark. His approach is quite different, as he expresses himself through a Spanish guitar and, for the most part, without amplification. Smith tackles a wealth of expressions, including scraping, craggy lines, delicate melodicism, staccato aggression and flamenco beauty. He does have a penchant for percussive effects, as heard quite vividly on Rhythms for John. For the most part, though, Smith sounds like he is attempting to tease out a sparse melody, as nimble, lyrical fragments appear at intermittent intervals. Those with open ears will be thrilled with this release."

"SPANISH GUITAR reissues the 1980 LP that was Smith's first solo recording. It's complex and subtle playing, gliding from glittering sound to muffled aside, wandering and circling back on itself then striking out in a new direction, as in the sudden emergence of consonant harmonies in D5 the final track of the original LP. It's been supplemented by live performances from the `90s, recorded in venues where Smith's unamplified nylon strings are matched with restaurant sounds and traffic noise. Somehow their presence is benign, forming a kind of dialectic with the heightened interiority of this gentle but resilient music."

"Smith's freely improvised music is quite detailed and often very quiet, but capable of intensity and impressive intricacy. His playing isn't quite so reference-free as Derek Bailey's, but don't come expecting lots of hummable tunes. This record will reward thoughtful study and irritate the inattentive."